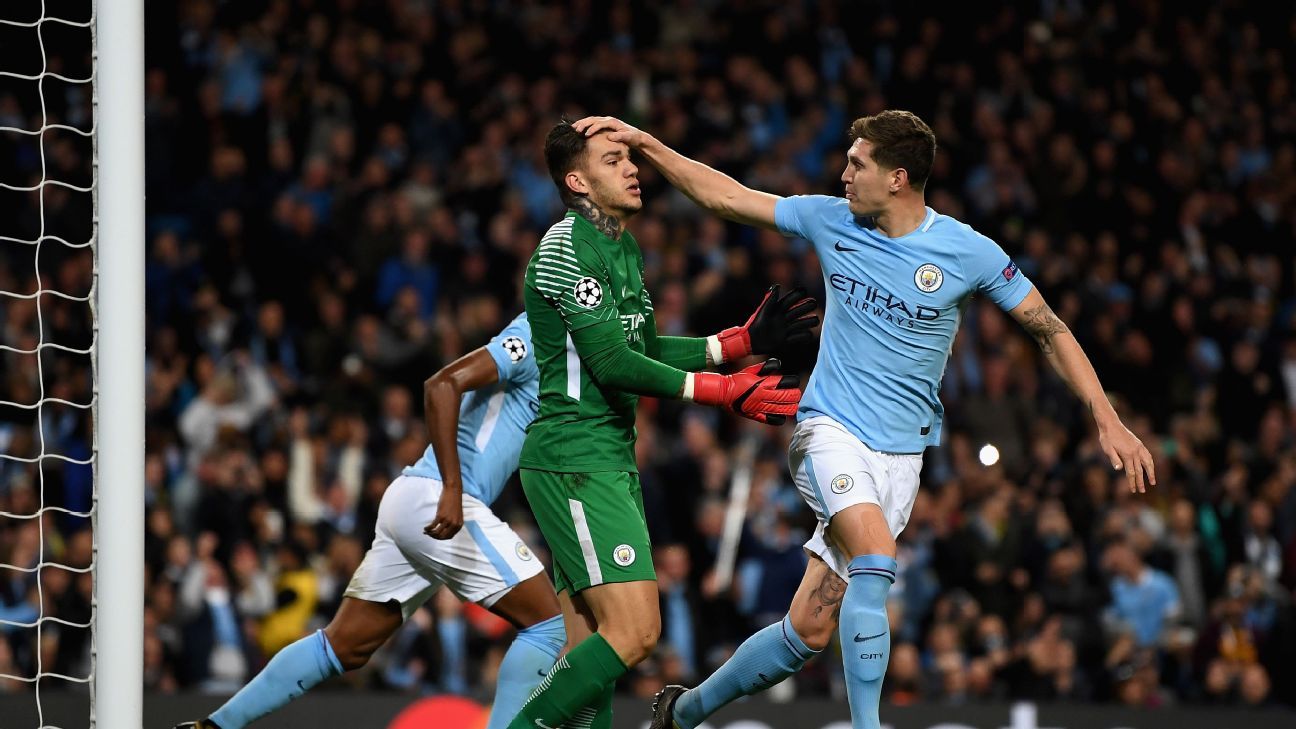 
There was a spell in Manchester City’s 2-1 win over Napoli on Tuesday where the home side couldn’t get out of their own half. Pep Guardiola’s team changed nothing in their style and continued to try to pass their way forward — but they often ended up giving the ball back to the Serie A leaders.

It left the City fans on edge. The club had started the game brightly, going 2-0 up in no time, and it looked likely that Napoli were going to struggle as they moved the ball quickly, exerting their dominance with beautifully crafted strikes by Raheem Sterling and Gabriel Jesus.

The game could have been put beyond doubt midway through the first half: Kevin De Bruyne was a few millimetres from crashing a shot into the net via the underside of the bar, while a goalmouth scramble saw Kalidou Koulibaly need to clear off the line from a goal-bound Jesus effort.

Had City taken those chances, it would have been an entirely different story. Perhaps Napoli would never have worked their way back into the game as they did. In the end, despite being made to look average in the opening exchanges, the Italian side came close to stealing a point after a penalty from Amadou Diawara set up a tense finale.

Napoli’s share of 46 percent possession will be one of the highest for a visiting team to the Etihad this season, and it was all because of their second half display. As City tried to play their way out of trouble after the break they were continually forced to pass backwards and eventually gave up the ball under the pressure.

Last season, Guardiola’s pass-from-the-back style was seen as an unnecessary risk. Watching John Stones and Nicolas Otamendi try to remain calm and look for options, only to give the ball away, left supporters questioning the manager’s methods. And on Tuesday evening, even though the passes were a lot more controlled than in Guardiola’s first season, the response from the stands was the same.

Since August, though, City have reaped the rewards of their defenders staying calm on the ball. The players have looked more at ease with this style than they did 12 months ago and it has resulted in some brilliant football and some big wins.

The 5-0 victories over Liverpool and Crystal Palace, or the 7-2 success against Stoke, were all built on the bedrock of passing the ball to a free player to open up options. That can mean playing it dangerously square across the face of goal and inside their own penalty area, but it works to free up space.

The restlessness in the stands after Diawara converted for Napoli was palpable. With just one goal separating the sides, and with the Italian team pushing for an equaliser by pressing men onto City’s defenders, there were increasing cries from fans to “get rid of it.”

However, Guardiola isn’t going to change. He’s a fundamentalist, steadfast in his belief that it’s better to keep the ball, even in dangerous areas, and try to move it forward than it is to aimlessly whack it long and give up possession. If he plays from the back against Stoke, he’ll do it against Napoli — and he’ll try it against Barcelona or Real Madrid, should any of those be paired with City in the latter stages.

Just because Napoli began to intercept a few passes towards the end of the second half doesn’t mean that Guardiola should heed the old “if in doubt, get it out” mantra. For him, it means his players need to pass the ball and move into space better.

Despite the nerves, and despite Napoli’s relentless pressure, the Italian side didn’t manage a shot in the final 10 minutes of the game. Most of it was played in the City half, too, barring a spell where the Premier League leaders ran down the clock by holding onto possession near the corner flag.

It may seem to the fans like the wheels are about to fall off when Stones rolls it back to Ederson, or the goalkeeper plays it short to Fernandinho through a group of three attackers trying to intercept. However, it’s far more under control than most supporters think.

Napoli were only able to breach City’s defence from the penalty spot and neither of the two spot kicks awarded were as a result of playing the ball from the back. In essence, City’s passing play, even in their own box, worked just fine.

If you want to enjoy the type of football that saw off Liverpool, Crystal Palace or Stoke, then you’ll have to get used to it in the tighter games, too. This is Guardiola’s method and there’s no sense in hiring him to do half a job.