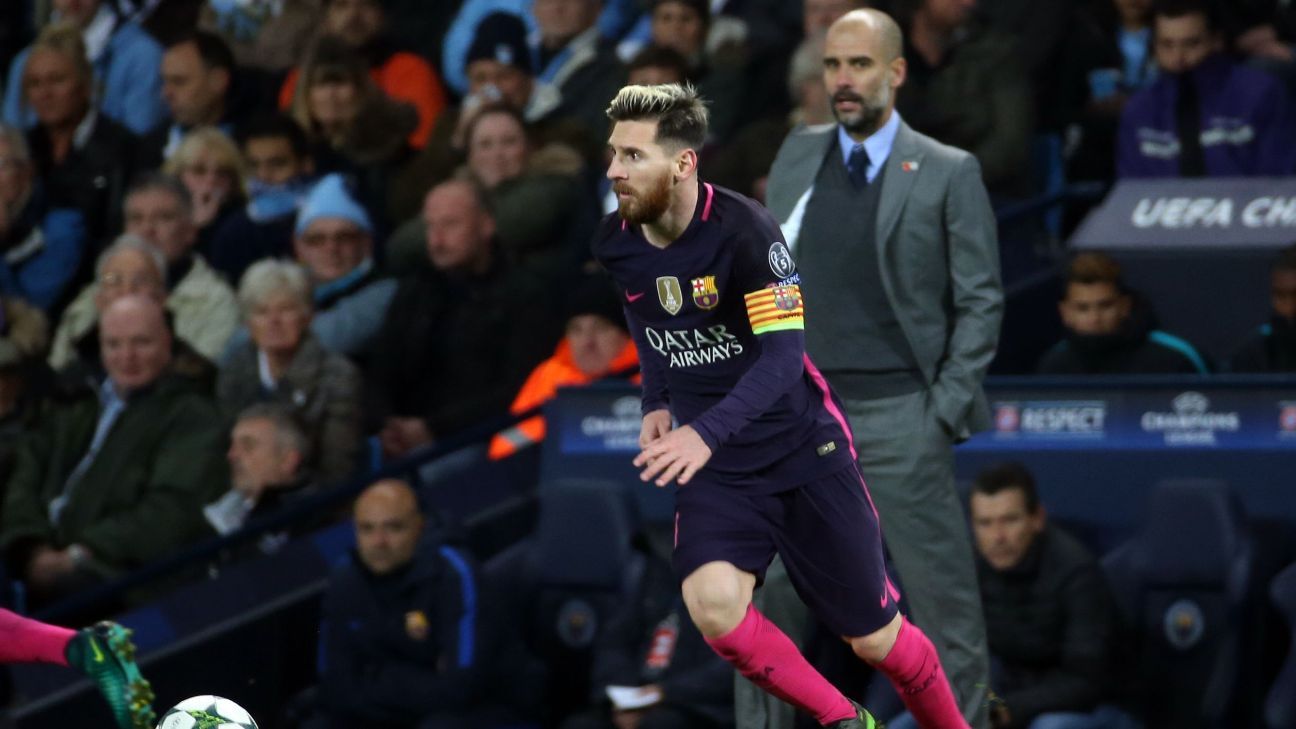 Manchester City are weighing up offering Lionel Messi a long-term contract that would see him move to MLS partner club New York City FC after three years in the Premier League, several sources have told ESPN.

They could also offer Messi the chance to become an ambassador for the City Football Group, the holding company that owns a number of clubs across the world, including City and NYCFC.

Messi, 33, would have the chance to help City win the Champions League for the first time in the club’s history before hanging up his boots in the United States.

City have emerged as the favourites to sign Messi after he shocked Barcelona by telling them he wants to leave on Tuesday.

ESPN revealed on Monday that City were already looking into whether a deal for the Argentina forward would be financially viable.

City will do everything possible to pursue the option of signing Messi on a free transfer, but various sources have told ESPN they would contemplate the possibility of paying between €100 and €150 million if he is unable to force an exit unilaterally.

The same sources add that City could also include players in any potential deal, such as Eric Garcia and Angelino. ESPN have also learned that Messi has consulted various legal experts regarding the clause in his contract but has not been able to gauge a clear reading on the situation.

The issue could end up in court, although various sources close to the operation expect there to be willing on both sides to reach an agreement if Messi follows through with his threat to leave.

The agreement would involve Barca naming a reasonable fee to allow Messi to leave the club which could then be re-invested in rebuilding Ronald Koeman’s team.

Other sources have confirmed to ESPN that City coach Pep Guardiola spoke to Messi last week to explain the project he would be involved in at the Etihad Stadium.

Messi has since taken the first step toward leaving Camp Nou, and City are closely monitoring the developments, albeit with the acknowledgment that any deal will have to be done without breaching UEFA’s financial fair play rules.

Therefore, it will be important to know if Messi can leave Barca for free or if City will have to negotiate a fee with the La Liga side. Messi’s contract runs until 2021 and includes a €700 million release clause.

However, Messi hopes to execute a clause that would allow him to leave for free. The clause was included in his 2017 renewal and stipulates that he’s allowed to leave for free at the end of each season if he notifies the club within a certain time frame.

Barca maintain that the window to use the clause has expired, but Messi’s legal team are arguing that it’s still valid due to the extension to the season caused by the coronavirus pandemic.

Speaking at the presentation of Francisco Trincao on Wednesday, Barcelona sporting director Ramon Planes said the club will fight to change Messi’s mind.

“As we have said many times, we’re still thinking of Messi as a Barca player,” Planes said. “Barca have rebuilt themselves many times throughout history and have always bounced back stronger. Our idea is to rebuild around the best player in the world.

“There’s a huge amount of respect for Leo because of what he is and his story here, but we’re not thinking about any contractual clause. We can’t have a public dispute between Barca and Messi, because neither side deserves that.

“The marriage between Messi and Barca has given both parties a lot. It has given the fans a huge amount of joy, and we have to fight for that relationship to continue. Internally, we’re working hard to convince Messi to stay. We want to find the best solution for Barca and for Messi.”

Asked whether there were other people at the club who would be open to parting with Messi, Planes added that everyone wanted the same thing.

“There is no internal division on this at all. Anyone that understands a little bit about football wants to have Leo in their team,” he said.