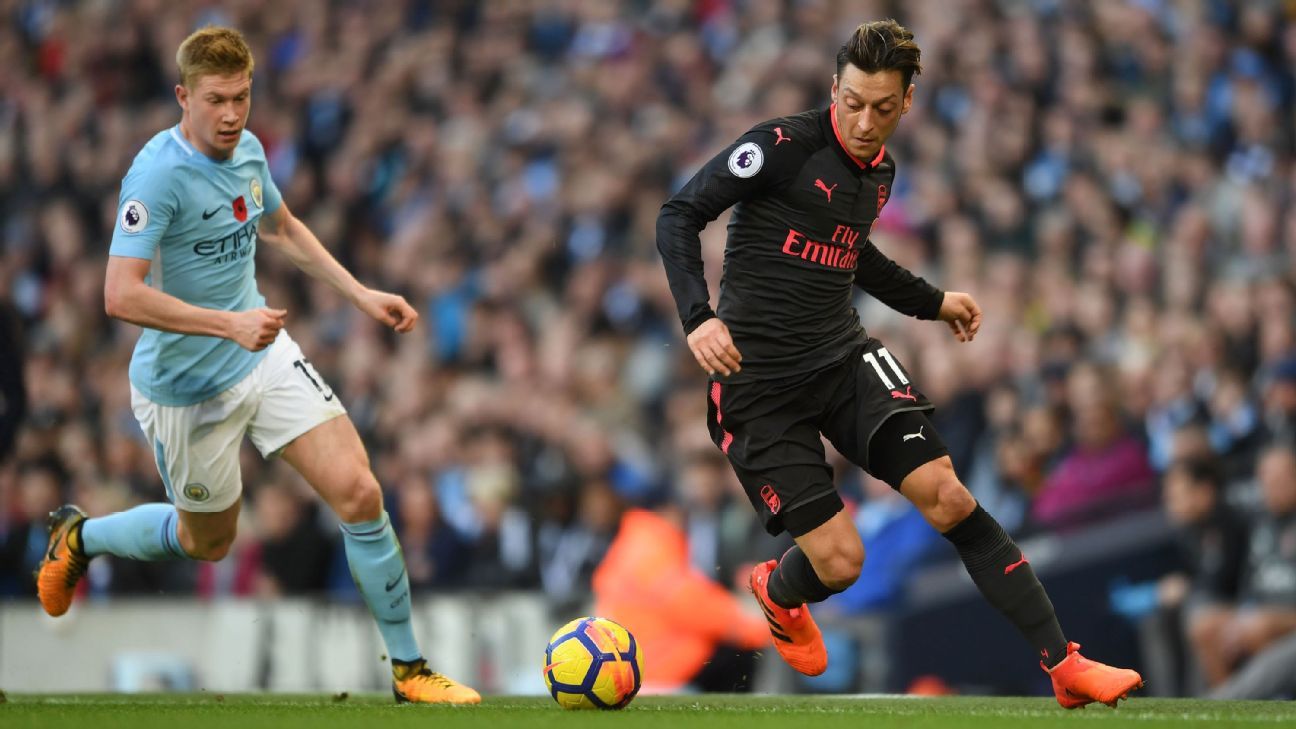 
The Carabao Cup is the poor relation of English football, the competition toward which most teams direct the least of their energy. But now that we are at the final stage, the Wembley arch looming, and there is actual, tangible success available, one suspects both of these teams will be taking it very seriously indeed.

There is a whopping 27-point gap between the two sides in the Premier League: in terms of only points, Arsenal are actually closer to West Brom at the bottom of the table than City at the top. Based on that alone, this game might not be much of a contest, but when broken down how do the two sides match up?

A comparison between the two first-choice goalkeepers probably won’t take long. Petr Cech is a man on the decline, while Ederson is the perfect stopper for Manchester City and his stock is rising. But that isn’t especially useful for this game, because both teams will use their reserve goalies, sticking to the policy that has got them to this stage.

There isn’t a huge amount to choose from between Claudio Bravo and David Ospina. Both impressed at the 2014 World Cup for their respective countries, but both have struggled to varying extents since moving to England. Bravo was of course not good after signing for City, but perhaps the criticism has been exaggerated because it was Pep Guardiola’s first big decision. Ospina’s relative failure has been more low-key, but nevertheless most Arsenal fans will be very nervous indeed when City’s multifaceted attack is bearing down on him.

Edge: City (But only just)

This is theoretically the weakest area of Manchester City’s team. Aymeric Laporte is still bedding in, John Stones still isn’t quite convincing, Nicolas Otamendi has improved but is still prone to diving in recklessly, and then there’s the fragility of Vincent Kompany. The full-backs are good, but you suspect that against some of the very best, this back line could still be exposed.

You could go to town picking out the individual flaws in the Arsenal defence. But more than single players being bad their biggest problem at the back is an endemic fragility, a lack of common sense that you’d expect from a youth side, an absence of conviction that has already seen them concede as many goals as they did when finishing second in 2015-16.

It’s sometimes difficult to spot where Manchester City’s midfield ends and where their attack begins. What isn’t difficult to spot is that their engine room and creative hub is superior to Arsenal’s. In fairness to Arsene Wenger’s men, it isn’t anything to be especially ashamed of: Virtually nobody’s midfield is better than City’s, and certainly none in the Premier League.

Kevin De Bruyne on his own would probably be enough to give City the edge in this department, but with Fernandinho holding the fort and either David Silva or Ilkay Gundogan to go alongside the Belgium international, it’s difficult to see where Arsenal stand a chance. It’s not that the likes of Jack Wilshere, Aaron Ramsey and Granit Xhaka are demonstrably bad; it’s just that, like much of what Arsenal do, they’re not good enough.

The good news for Arsenal is that it’s touch and go whether Gabriel Jesus will be fit in time. The bad news is that he might be, and furthermore even if he isn’t then Sergio Aguero will be City’s man up top. Raheem Sterling is an injury doubt with a muscle problem, but throw in either Leroy Sane or Bernardo Silva, and the options are fairly frightening.

Arsenal’s forward line is potentially excellent. A combination of Pierre-Emerick Aubameyang, Mesut Ozil and Henrikh Mkhitaryan could be very impressive indeed. But you get the sense that they haven’t quite jelled yet, and at least one, possibly all three of those trio, have been liable to go missing in big games. Once again, a nod to Pep Guardiola’s team.

One is a man at or at least near the top of his game, building his third majestic side, admittedly at mind-boggling expense. The other is a man who probably should have called time a few years ago, and who with every day he stays and with every spirit-crushing defeat, makes the memory of when he was the innovator fade that little bit more.

Still, on actual, tangible achievement in England, Arsene Wenger is obviously miles ahead. The League Cup is, remarkably enough, the domestic trophy that has eluded him in his time at Arsenal, so in many ways it would be pleasing if he won on Sunday. But in all likelihood he won’t: Guardiola will probably not stay in the Premier League for a quarter of the time Wenger has been at Arsenal, but this will surely be his first trophy as City manager.

The question of whom this final will mean more to is a slightly tricky one. For Arsenal, it would represent some sort of success in a season that has held little and is unlikely to bring more. For City, the first leg in a potential treble (a treble, not the treble, clearly), and a first actual victory for Guardiola in England. It will, to paraphrase Brian Clough, give his players a taste of champagne that may motivate them to seek more.

Perhaps Arsenal’s lengthening history with failure might actually serve them well in this game. Both teams come into the final on the back of chastening defeats to weaker opposition, City to Wigan in the FA Cup and Arsenal to Ostersunds in the Europa League, even if they ultimately went through. The thing is, Arsenal are used to this sort of thing, and used to dealing with it. Straw-clutching perhaps, but that might give them a mild boost. Also, it can’t be forgotten that everyone expects City to win: the pressure from that perspective is on them.