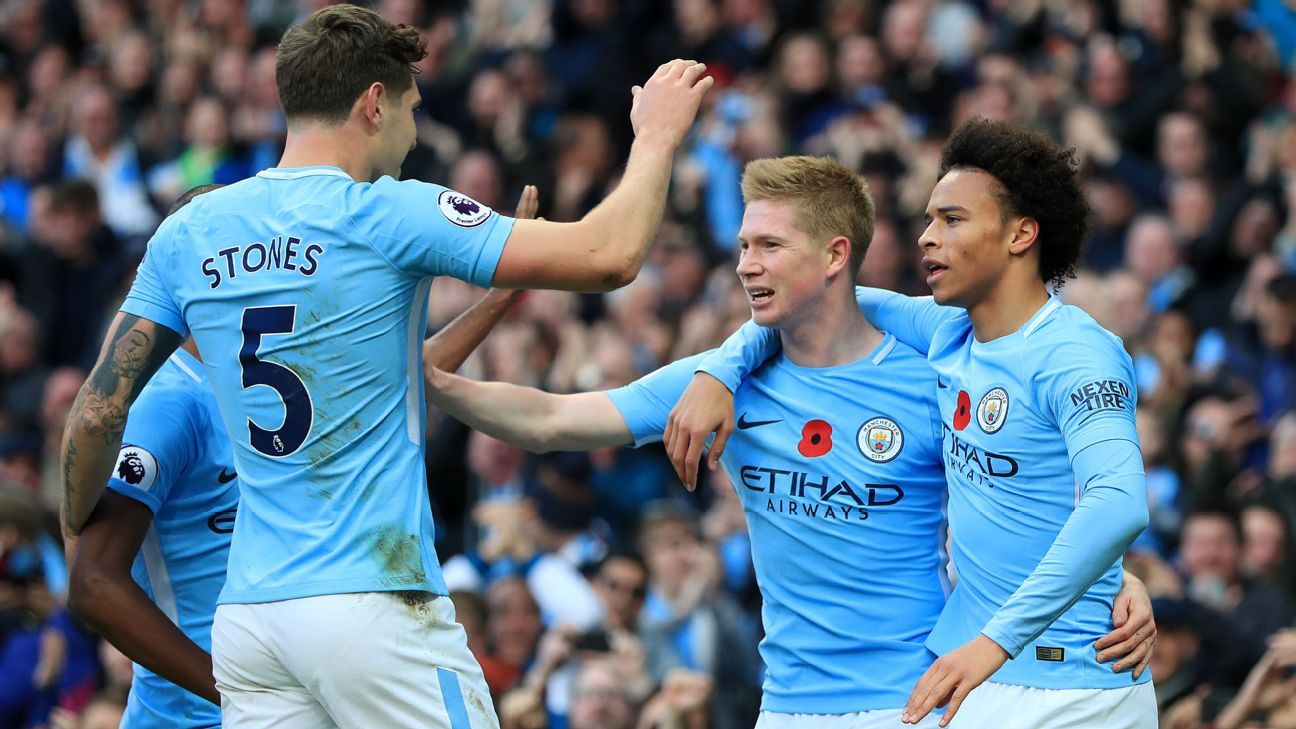 Manchester City march on and, these days, Arsenal are just another team that cannot keep up. In the end this was a comfortable victory, Kevin De Bruyne’s first half goal added to by a Sergio Aguero penalty before Gabriel Jesus settled matters with 15 minutes to play. Alexandre Lacazette had given Arsenal, who had a legitimate claim for offside when Jesus scored, hope of a comeback but they were well beaten and continue to look well short of anything approaching a title bid.

The hosts could — perhaps should — have been ahead within 90 seconds. Aguero has certainly put away harder chances en route to becoming their all-time record scorer but, found in space by De Bruyne after a quicksilver counterattack, he blazed wide of the near post.

Otherwise, Arsenal began the game sharply enough, pressing aggressively and forcing errors inside City’s half. But they had another let off 11 minutes in when Leroy Sane, running through after fine work from Aguero, centred just in front of the stretching Raheem Sterling.

It paved the way for the sustained spell of pressure that brought the breakthrough. De Bruyne had just seen a volley parried by Petr Cech when, after Sane retrieved possession, the ball was worked back to him. His raking left-footer across the Arsenal keeper, via a one-two with Fernandinho, was clinical — although the visitors’ defence had stood off him.

A second goal should have arrived in the 35th minute when Sterling, faced with a relatively simple pass that would have put Sane through on goal, over-hit badly. Then Cech blocked from a combination of Aguero and Laurent Koscielny at point-blank range; Arsenal had barely created a chance but with the first half’s final action, Aaron Ramsey forced a sharp near post save out of Ederson to show City needed to remain alert.

Perhaps it did the trick. Three minutes after the interval, Nacho Monreal bundled Sterling over after a pinpoint 50-yard ball by Fernandinho. Aguero dispatched the spot kick via the post and the game looked as good as over. But City’s intensity dropped and Arsenal, buoyed by the introduction of Lacazette, found a response. The substitute pulled a goal back with 25 minutes left, finishing clinically from Ramsey’s neat pass, and at last the game had a genuine edge.

Jesus should have removed it but was denied by an astonishing Cech save at the far post. He fared better with his second chance although Arsenal may have had a point in claiming that Silva, who had been left alone to tee him up, was offside.

“Alexis Sanchez, he wants to be blue,” crowed the Manchester City fans during the first half. Their counterparts in the away end could not really argue with that, although whether he would really fit in at the Etihad remains another matter entirely.

Watching Sanchez here it was, for long periods, hard to see him fitting in with the rat-a-tat of movement and invention behind so much of what City do. Their interplays are so clean and instinctive; the release of the ball invariably to quick and sharp. Sanchez displayed few of those attributes on a deeply unsatisfactory encounter with his would-be employers and, watching him gift possession to City on several occasions — notably passing a short corner straight to Aguero shortly before the break — the thought persisted that he is simply not reliable enough in possession to fit into the exhilarating patterns of play Guardiola’s team weaves.

That is hardly a new idea: a criticism of Sanchez has sometimes been that he is a soloist, a gladiator who excels when leading the charge on his own terms but lacks precision within a more coherent structure. Then again, there was plenty to say in his defence. Arsene Wenger took on City with a starting XI that amounted to a 5-4-1, deploying Francis Coquelin in an unfamiliar centre-back role and demanding that Sanchez, supported by Mesut Ozil and Alex Iwobi, led the press and the counterattack. The result was that he had little to work with and a lack of movement around him, certainly until the arrival of Lacazette; Sanchez was feeding off scraps in a selection that was certainly not designed to carry the fight to City.

Yet the impression remains that he should be doing far more and there was no sign of Sanchez tracking back when Silva — offside or not — received possession on the flank he was now occupying in the build-up to Jesus’ goal. Arsenal may not have another talent to match up to Sanchez, but City have plenty. So the question that rang out here was: who is not good enough for who?

3. Sterling still with plenty to learn

Now and again, Sterling still exasperates Guardiola. The City manager expressed his pleasure at the winger’s form last week but when that miscued pass sailed beyond Sane and took a clear scoring opportunity with it, he jumped up and slammed his arms down in frustration.

Guardiola thinks there is plenty more to come from Sterling, whose youth at 22 is still sometimes forgotten, and that room for improvement was evident at times here. The decision-making is not always spot on and at times he lacks the polish of those around him. But that is not to downplay his importance to the league leaders: at his explosive best he perfectly complements the grace exhibited elsewhere and the point was made amply against Arsenal.

It was a characteristic dart down the flank, catching Sead Kolasinac napping, from which Sterling won City’s penalty. The pass from Fernandinho had turned Arsenal around in a second: Sterling gives you that option, that chance to simplify and go for the throat. The timing of his runs has certainly improved; his all-round game has too and any idea that Guardiola could have let him move to north London in August as part of an exchange for Sanchez now looks more fanciful than ever. Sterling would walk into this Arsenal team: his spark and dynamism would outshine almost all of their options and Guardiola must take credit for the work he has done in developing him.

Sterling and City were not at their very best against an Arsenal team that, although outclassed over the 90 minutes, showed more resilience than they have in many of their away games against rival top four contenders. Guardiola may still find the occasional cause for frustration, then, but there was little to complain about here.