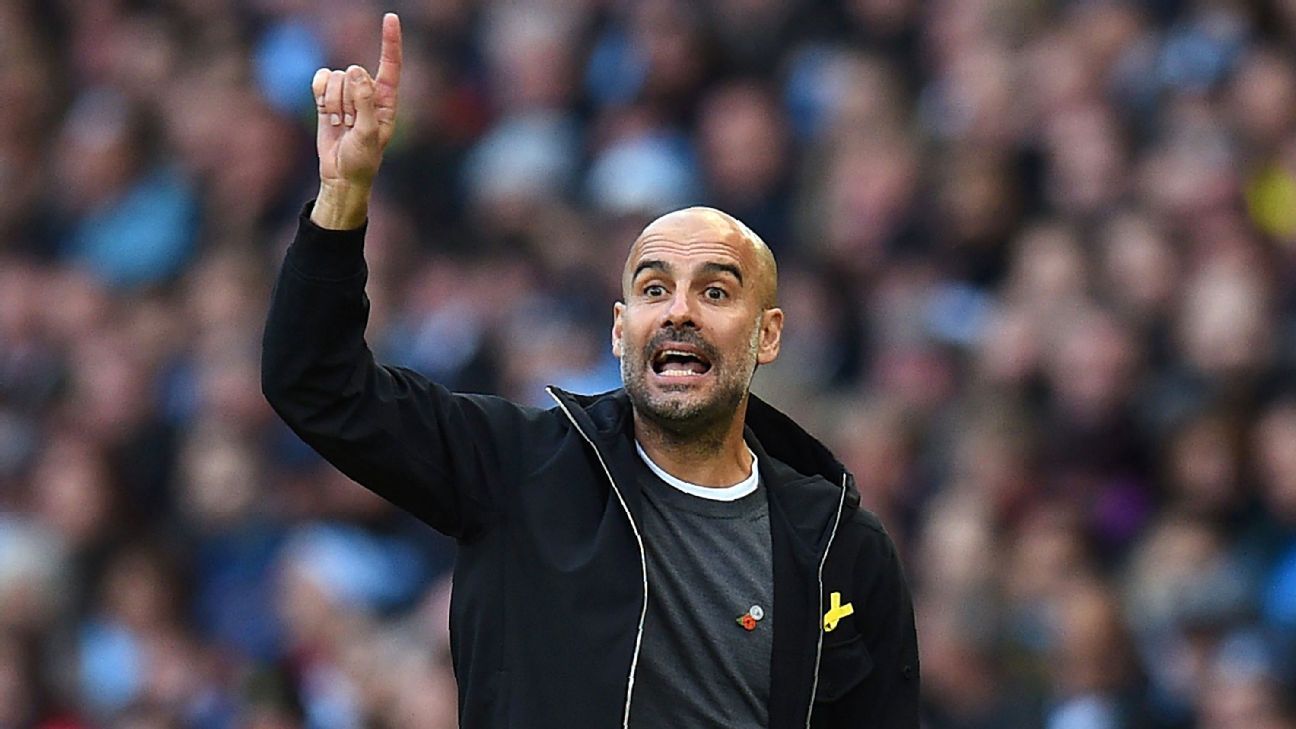 Manchester City’s start to the season has been remarkable, even record-breaking in places. They are on the joint best start to a top-flight English season since Tottenham won their first 11 games in 1960-61. If a triumph in a penalty shootout after a 0-0 draw qualifies as a win, they are on a club-record run of 15 straight victories. They are on course to finish with 107 points and 133 goals. They have prompted questions if anyone can halt them, either over 90 minutes or 38 games.

“If they have decisions at home like that, they will be unstoppable,” said Arsene Wenger, raging against an offside goal and a correctly awarded penalty after Arsenal’s 3-1 defeat on Sunday.

Yet the predictions are premature at best, ludicrous at worst. History suggests City will probably stumble somewhere during the obstacle course of a season, and not merely because they have not even faced their two closest challengers, Manchester United and Tottenham, yet. They could be caught.

There are City-specific reasons. They are already fielding a midfielder at left-back because Benjamin Mendy’s season has been curtailed and, as superbly as Fabian Delph is doing, there has to be the chance an opponent will find a way of turning him into a weak link. Another injury would mean Pep Guardiola is reduced to his third-choice left-back.

Nor, arguably, do they have sufficient cover in the middle of defence. With Vincent Kompany sidelined and Nicolas Otamendi banned for the game at Leicester, Eliaquim Mangala is poised to step in. City are one injury away from the Frenchman, who was abject against Wolves in the Carabao Cup, featuring more often. Even Otamendi, while improved this season, remains erratic. He was tormented by Mohamed Salah for 45 minutes in September. In goal, they are one injury away from recalling Claudio Bravo.

City have more strength in depth in the front six positions, but there is no duplicate of Fernandinho in their squad. Nobody else can quite replicate Kevin de Bruyne’s contribution. An injury to either would be interesting. And a brand of football that ambitious might need to be executed near perfectly to work: When City were not as slick, a second-string Wolves side kept them out for 120 minutes.

Then there are the general reasons why any team can flounder: They can encounter an in-form goalkeeper or an opponent who produces a moment of magic. In a game, they could fall victim to ill fortune, whether a decision or a deflection.

And this is why the notion they could be the new Invincibles is so wild. “Someone will beat us,” Guardiola said last Friday. The fact that Wenger’s team of 2003-04 are the only side since 1889 to complete an English league season unbeaten illustrates its rarity and its difficulty. The issue should not even be raised before January.

Tottenham went on a longer unbeaten run at the start of last season. So did Chelsea in 2014-15, City themselves in 2012-13 and Liverpool in 2007-08. Only one of those four sides even won the title. There are teams that began campaigns on undefeated sequences that were more than twice as long and still did not come close to becoming Invincibles: Manchester United did not lose in the first 24 league games of 2010-11, Liverpool in the first 29 in 1987-88 or Leeds in the first 29 in 1973-74, when they were eventually beaten four times.

And then there is the idea that City cannot be caught. They are eight points clear. Guardiola pointed out on Friday that there were 84 points still to play for. That is down to 81 now. Yet six years ago, a United side that had won four of the previous five titles were eight clear with six games remaining. City became champions.

No wonder Jose Mourinho said on Sunday that an eight-point advantage “is not the same as eight points in the Portuguese league, La Liga, the Bundesliga.” It is not an unbridgeable gap in England. Real Madrid have never come from eight behind to win become champions; United were 12 behind Newcastle in 1995-96 and reclaimed their crown. Three seasons ago, Mourinho’s Chelsea were eight ahead of City. Then Manuel Pellegrini’s side drew level in the standings before Chelsea eventually prevailed by eight.

None of this should to detract from City’s performances. They have been the best team, the most prolific and the most watchable — by some margin — so far, but excelling in a section of the season is very different from being unbeatable, unstoppable or uncatchable over the whole of it. Guardiola has shown a realism about that, but some outsiders have not. The overblown reaction, trying to read too much into a terrific start without considering either the precedents of the past or the pitfalls a season can provide, is the problem.

It shows some cannot cast their minds back six years. City made a near identical start in 2011-12, with 10 wins in 11 and while scoring one more goal, but went on to lose five league games. They were not invincible. And they relied upon a goal in the 94th minute of the final match of the season to become champions on goal difference.