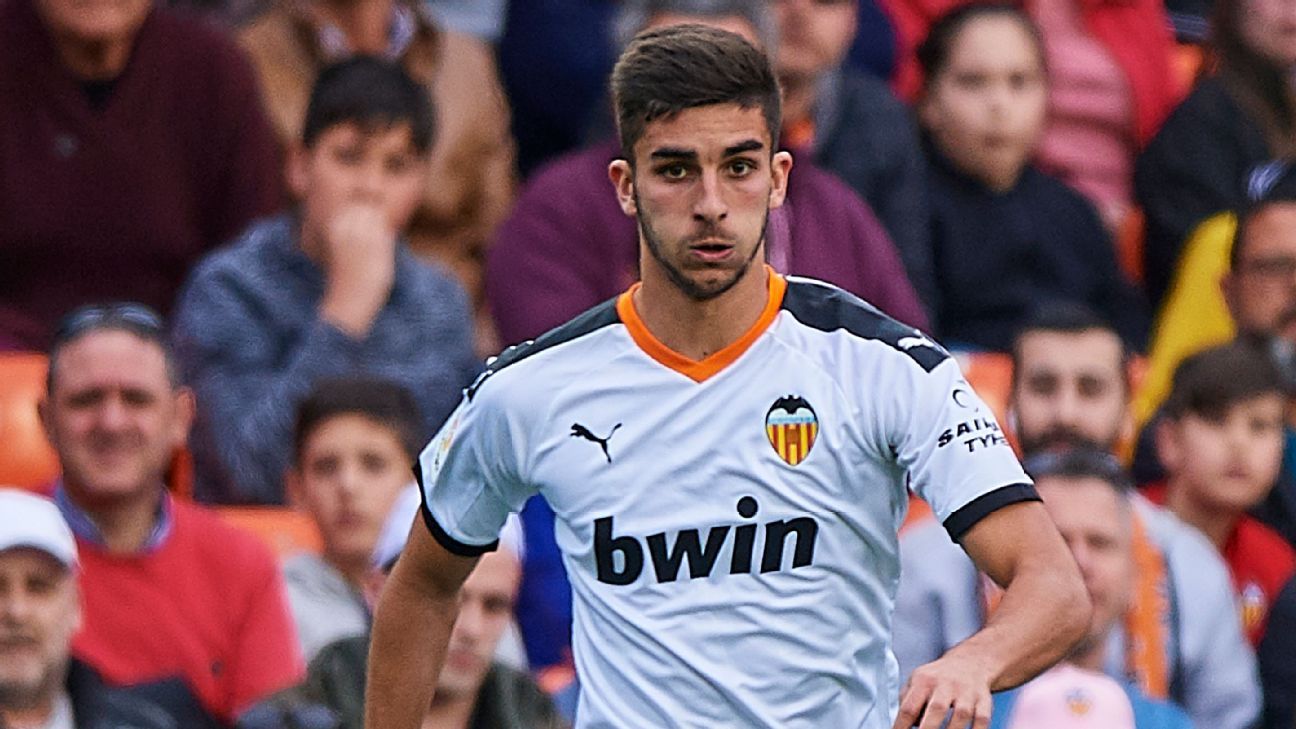 Manchester City are set to make their first big move in the transfer market of the summer after agreeing a deal with Valencia winger Ferran Torres, according to Eurosport.

The 20-year-old is seen as the ideal replacement for Leroy Sane following the Germany international’s departure for Bayern Munich two weeks ago.

Torres, who has scored six goals this season, has been monitored by European giants such as Liverpool, Manchester United, Barcelona, Real Madrid and Juventus.

Eurosport reports that representatives of the Spain under-21 international met with City on Wednesday and reached an agreement on all of the personal terms of a transfer.

Now, City must settle on a fee with Valencia, who have failed to qualify for European football next season and only have one year remaining on Torres’ contract.

09.29 BST: James Rodriguez‘s stepfather has said the midfielder will have “no shortage of offers” this summer and insisted the 29-year-old “has his reasons” for asking to be left out of the Real Madrid squad in recent weeks.

Rodriguez hasn’t featured in Madrid’s last four matchday squads at his own request as Zinedine Zidane’s team close in on the La Liga title.

The Colombia international was close to leaving the Bernabeu last summer, rejecting moves to Italy and China, while Real Madrid denied him his preferred option of joining rivals Atletico.

“He’ll have no shortage of offers because he’s one of the world’s top players,” Restrepo said. “I like Spanish football, there’s been a lot of talk about Atletico Madrid, I’d love it, they have great fans and a beautiful stadium. I don’t know if the speculation in the media is a reality. There are good clubs in Italy and England too.”

09.01 BST: AC Milan sporting director Frederic Massara says no decision has been made yet regarding Zlatan Ibrahimovic‘s future at the club.

Massara has hailed the impact that the veteran Sweden forward has had at the club since returning to the Rossoneri in December.

Ibrahimovic, 38, who has scored five goals and set up three more in 13 league appearances since joining from LA Galaxy, is tied to Milan until the remainder of the season, with an option to extend his stay until June 2021.

“We will have to make the assessment with him because it will also depend on his frame of mind and his desire,” Massara told Sky Italia. “He is giving a lot to this team, he has helped the group to grow exponentially, he has given mentality, he has brought quality and the team has changed since his arrival.

“We will see what happens together, in the meantime, we will enjoy him until the end and celebrate his 100 games at Milan, that have been spiced with so much magic.”

08.32 BST: Luis Suarez has said Barcelona must do better if they want to convince Lionel Messi to extend his contract at the club beyond the end of next season.

Messi, 33, has a deal at Camp Nou until 2021 but a report in Spain this month suggested he was considering not renewing his terms when they expire.

Sources subsequently confirmed to ESPN that he is angry with Barca’s front office about leaked reports that appeared to make him responsible for certain events at the club, such as the January sacking of coach Ernesto Valverde.

Messi, sources added, is also frustrated about the squad’s lack of quality and Suarez says Barca must strive to improve the team around him to ensure he doesn’t walk away for free next summer.

“What he would like is a winning project, an exciting project,” Suarez told Mundo Deportivo. “But it’s a situation that he has to manage with his family and, in this case, with his dad, and be conscious of the decision he has to take.”

Luis Suarez speaks about Lionel Messi’s future at Barcelona and debates whether he’ll seek a change.

08.00 BST: Arsenal manager Mikel Arteta has said that he is concerned about not having enough funds in the offseason to strengthen his squad.

The former Gunners captain, who took over as team manager earlier this season after the sacking of Unai Emery, said it will take investment if the club is to compete for titles.

“You need it to build a squad. It’s not magic,” Arteta told Sky Sports after Arsenal’s 2-1 win over Liverpool. “You need to improve with quality, quality players in the squad and you need bigger squads to compete in this competition. There’s the challenge.”

Arteta does have Arsenal in contention for silverware this season as they will face Manchester City in the FA Cup semifinals on Saturday, but stressed that there is a chasm between the London side and the likes of City and Liverpool, despite Wednesday’s win.

“The gap between the two teams [Arsenal and Liverpool] today is enormous,” he added. “We can not improve it in two months, but the accountability, the fight is now equal and I am very proud of that. The rest will take some time.”

Manchester City are keen to find a new defense partner to play alongside Aymeric Laporte next season, and Pep Guardiola is being linked with Kalidou Koulibaly and Raphael Varane.

The Daily Star says that the City boss will have to spend £65m to take Koulibaly away from Napoli, where he has three years left on his contract in Naples.

Koulibaly, they say, is Guardiola’s top target, and the Spaniard is said to be willing to pull out all the stops in an effort to strengthen his side ahead of their fresh assault on the Premier League title.

Meanwhile, it was discussed on the Transfer Window Podcast that with John Stones leaving the Etihad, Guardiola is keen to tempt Varane away from Real Madrid. They say that Varane is City’s top target, not Koulibaly, but that it would be hard to lure him away from the Bernabeu.

What is most clear is that Guardiola is intent on finding a new defense partner for Laporte this summer.

Christian Eriksen could be on his way out of Internazionale just six months after joining the club from Tottenham Hotspur.

The Mail, citing reports in Italy, suggests that the Nerazzurri are willing to listen to offers for the Denmark international after he has failed to impress under Antonio Conte at the San Siro.

The 28-year-old has struggled for form since his move in January and was even dropped to the bench for the recent 3-1 victory over Torino, with Conte himself hinting that Eriksen’s reputation isn’t enough for him to guarantee a starting place.

Inter are said to be willing to listen to offers of around £55 million.

– Stream Serie A games on ESPN+

Real Madrid are desperate to offload Luka Jovic this summer and they might have found themselves a buyer, with German side Hertha Berlin keen to take a punt on the Serbia star, according to Marca.

The Spanish outlet reports that Hertha, thanks to the backing of new major investor Lars Windhorst, see Jovic as the perfect addition to help them mount a serious title challenge next season.

Jovic has struggled at the Bernabeu under Zinedine Zidane but Hertha believe his form in Germany, in which he scored 27 goals during the 2018-19 campaign for Eintracht Frankfurt, is evidence that he can return to form in the Bundesliga.

Hertha could splash the cash this summer and Jovic could be the first of several big-money signings as they look to close the gap on Borussia Dortmund and Bayern Munich.

– The Illawarra Mercury says that Wollongong Wolves’ Thomas James is a target for A-League side Perth Glory. The Australian top flight resumes this Friday after a four-month hiatus and the Glory are reportedly looking to bolster their forward options with the 2019 NSW NPL Golden Boot winner.

– Paris Saint-Germain sporting director Leonardo is keen to sign Luca Pellegrini, who is currently on loan at Cagliari from Juventus. Leonardo is looking for reinforcements on the left side of defence and Le10sport are suggesting that Juventus could be willing to sell the Italy under-20 international. Pellegrini hasn’t had a chance to impress in Turin since his move from AS Roma last summer, and he might need to leave the Italian league leaders to play more first-team football.

– Napoli and Inter Milan are looking to raid AC Milan for Ivory Coast midfielder Franck Kessie, according to Calciomercato. The Rossoneri are keen to keep the 23-year-old but might be tempted to sell given that his price has risen dramatically in recent weeks, the result of three goals in consecutive games, against Juventus, Napoli and Parma. Kessie could return as much as €40m, which is why his agent is set for showdown talks with the club’s management at the end of the season.