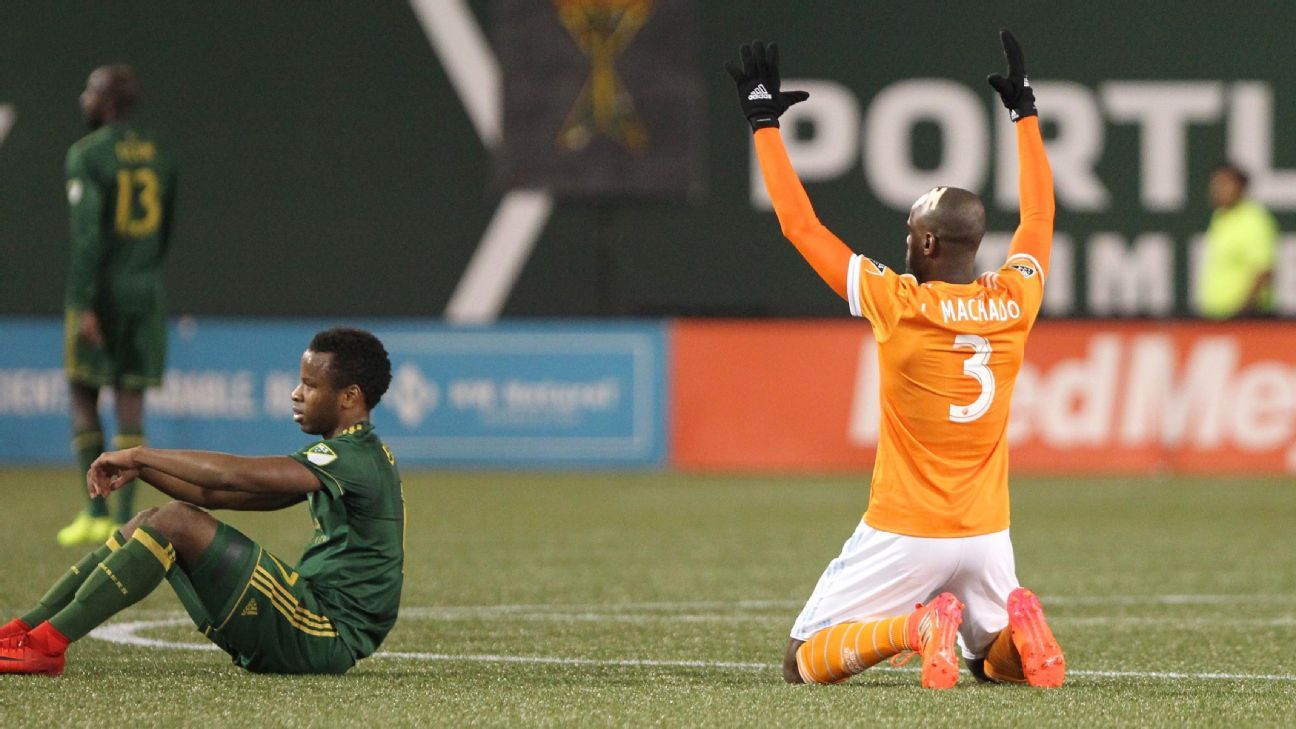 
After a weekend that had a little bit of everything, Major League Soccer’s final four is set. As is so often the case in the MLS Cup playoffs, the postseason has seen its share of upsets, with the Houston Dynamo’s victory over the Portland Timbers, the top seed in the west, the most notable.

The Dynamo’s win sets up a date with the Seattle Sounders who booked their place in the conference final by overcoming the Vancouver Whitecaps. There was drama and bad blood as well in the east, with Toronto outlasting the New York Red Bulls, while Columbus continued its run (despite plenty of off-field distractions) by hanging on to get past New York City FC.

Here are the storylines to follow in the conference finals.

1. How will the international break affect the teams that are left?

The four remaining teams must now wait over two weeks before they play again thanks to the international break. For sides like the Sounders and Dynamo that are banged up, the respite isn’t the worst thing to happen, as it will give some preferred starters the chance to heal up and get closer to their best. That said, the Dynamo’s Honduran contingent (Alberth Elis, Romell Quioto and Boniek Garcia) will be contesting a World Cup qualifying playoff against Australia, so the concern there is that Houston won’t be as rested as Seattle will.

Toronto won’t mind the break either; the time will be needed to get its collective head — one that it lost to a degree against the Red Bulls — back together.

About the only team that might rue the time off is the Crew. Columbus saw its 12-game unbeaten streak across all competitions snapped in Sunday’s 2-0 defeat to NYCFC but, overall, the Crew has been in arguably the best form of any of the remaining sides. At the very least, the break will give Gregg Berhalter ample time to come up with a tactical plan to thwart TFC.

2. Crew’s date with destiny still on

The Crew’s run so far has borne an uncanny resemblance to the movie “Major League.” As a consequence, #SaveTheCrew isn’t just what goalkeeper Zack Steffen has been doing during the playoffs, but it’s become a galvanizing force of fans backing the team, this despite owner Anthony Precourt’s public flirtation with moving the franchise to Austin, Texas.

But give Berhalter and his players credit. They’ve managed to tune out the noise surrounding the team’s future and have been playing for the present. The concerns about the team’s defense, and in particular central defender Jonathan Mensah, will persist, but Berhalter has enough pieces playing well that a trip to its second MLS Cup final in three years is well within reach for the Crew.

3. Toronto’s depth to be tested again

TFC’s deep roster has been lauded throughout the season, and with good reason. It seemed like no combination of injuries and international absence was enough to knock the Reds off their stride. But now manager Greg Vanney will have to look to his bench again when the stakes are highest. Starting forwards Jozy Altidore and Sebastian Giovinco will be suspended for the opening leg against Columbus on Nov. 21 — Altidore for his rather foolish exchange with the Red Bulls Sacha Kljestan, and Giovinco for the silly pair of yellow cards he received over two legs.

It seems likely that Tosaint Ricketts will be asked to deputize for Altidore, while Victor Vasquez will slide into the Giovinco role, leaving one of Jonathan Osorio or Armando Cooper to move into Vasquez’s normal role deeper in midfield.

The situation certainly isn’t unfamiliar for Vanney. Toronto’s record when both Altidore and Giovinco weren’t on the field this season is 2-2-0, but the playoffs are a different beast, and how TFC copes on the road in front of what will no doubt be an intense Columbus crowd will largely determine if the Reds will be hosting MLS Cup for the second year in a row.

The MLS Cup playoffs haven’t always been kind to Seattle forward Clint Dempsey over the years. Prior to the second leg against Vancouver, Dempsey had managed just four goals and three assists in 19 postseason appearances. His strikerate with the Sounders was a bit better, but still a rather pedestrian three goals in 10 matches. But after bagging both goals in the second leg, Dempsey’s numbers are now a quite respectable five in 11.

Given that Jordan Morris, Victor Rodriguez, Ozzie Alonso, and Gustav Svensson have been nursing injuries, Dempsey’s performance came at an opportune time. The aforementioned break figures to help the Sounders heal up. But this seems like the playoff year where Dempsey will really shine, and a repeat performance will almost certainly catapult Seattle into its second consecutive MLS Cup final.

Not many expected the Dynamo to prevail against top-seeded Portland on the road, but Wilmer Cabrera’s side did exactly that. This is a side that on the one hand seems like a mish-mash of spare parts, but it’s also one that has grown over the course of the season, and in the process it has revealed that there is more to its game than just the simple defend-and-counter. It has also shown it can get results on the road when it needs them.

The two teams split the season series at one win apiece, though it’s worth noting that they haven’t played each other since early June. Defensively, Houston has been stellar over the last month, conceding just three goals in its last seven matches across all competitions. Offensively the team has done just enough.

Given its outstanding home form this season — it went 12-1-4 — as well as the recent history of lower seeds prevailing over higher seeds, another Dynamo ambush could be in the offing.