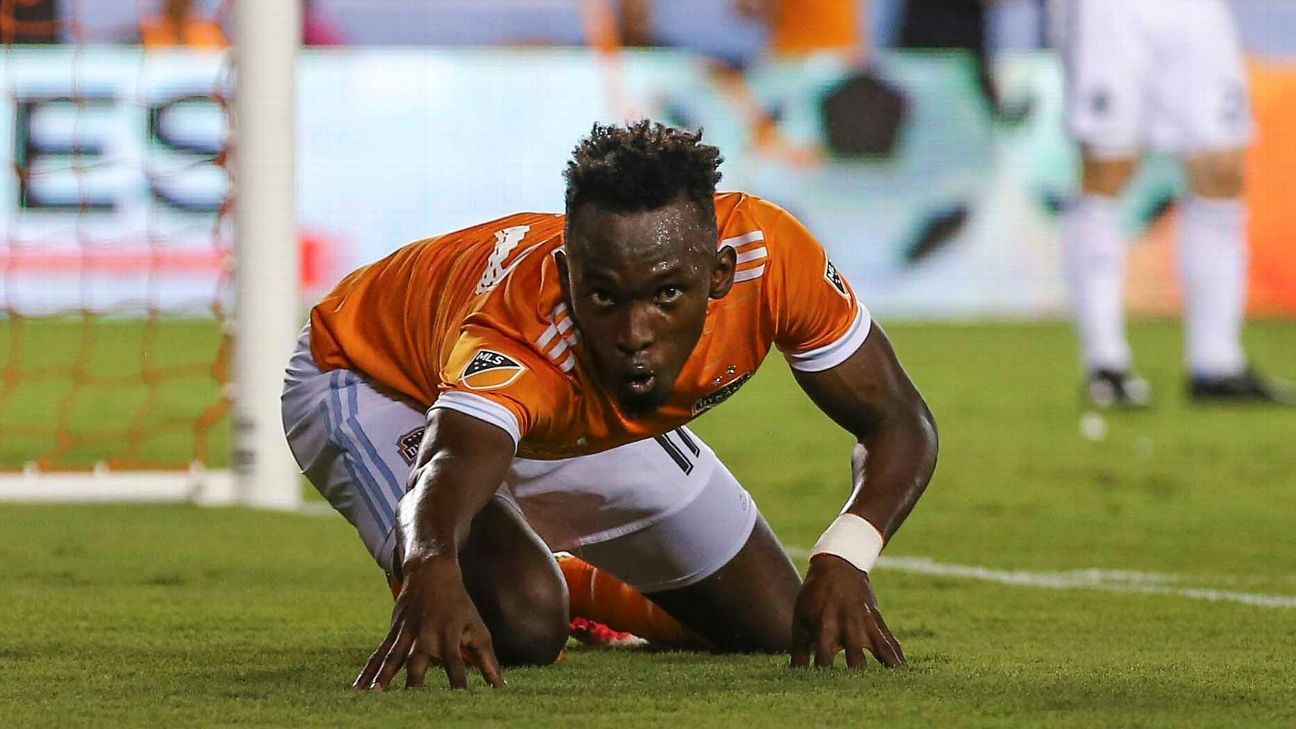 
The genesis for a great goal celebration can come from anywhere. Just ask Alberth Elis. The bolt of inspiration for his panther crawl started with a video game. And it wasn’t even his idea.

“During preseason, I was playing FIFA with some teammates,” the Houston Dynamo forward told ESPN FC. “Someone scored a goal and did that celebration. Someone told me to do that in a game. I did it after my first MLS goal.”

Maxi Urruti’s trademark celebration, in which he pantomimes an archer, emerged from a conversation he had with a teammate.

“During my time in Portland, I was playing around with Norberto Paparatto, and the archer celebration was what we came up with,” he said. “I scored against Montreal [in 2014], did the celebration, and it stuck. It’s something I’ve continued doing.”

For Kei Kamara, one of MLS’ biggest personalities and a man who has an entire highlight reel of goal celebrations, the key is to be genuine and in the moment.

“My signature celebration, which is the heart-shaped hands, is all natural,” he said. “It just comes.”

“[What makes a celebration special] is the intention,” he continued. “Sometimes it might not be the greatest goal, but the intention to do it and to make it realistic is important. You want to let the fans know that you’ve put some thought into it and that you want them to enjoy it. The game is about entertaining people, entertaining the fans, entertaining yourself.”

Kamara understands that being a professional, especially a professional goalscorer, is about more than simply putting the ball into the back of the net. That’s a player’s first, and most important, job, of course, but there’s something more, too. The pure elation of scoring is something to celebrate, a time to let loose and show the fans that you appreciate their support. It’s a time to have a little fun, whether that’s with heart-shaped hands, a tribute to Michael Jackson or a goofy, slow-mo dance. Are you not entertained?

MLS needs personalities desperately. It’s easier to fall in love with a sport when there’s some heart — in the shape of hands or otherwise — behind the players scoring beautiful goals. It needs Elis with his panther crawl, Urruti’s archer, Kamara’s everything and other players like Dom Dwyer’s selfies, Cubo Torres (whose robot celebration inspires students) and Alan Gordon’s sheer, unadulterated joy. Our informal panel of experts singled him out as having the best celebrations in the league.

Of course, sometimes a player can go just a bit too far. Kamara did when he twerked, a moment of magic that earned a deserved yellow card.

Yet even a caution-drawing celebration isn’t that much of a caution in the grand scheme of things. If anything, MLS should encourage these harmless displays of joy following a goal. It makes for fun moments and strong advertisements for the league.

I asked a few players if there were celebrations they wanted to perform but were afraid to because they were against the rules. They had some thoughts.

Kamara: “I do have a special one which I hope I do it one day. There’s one good team one that I want to do. I’ve been choreographing that one for a long time. I hope people get to see it. It’s a risky one. One day when I do it, it’s going to go viral.”

Elis: “I would like to wear [a] Black Panther’s mask. I already have the mask. Let’s see when I am able to do it.”

Dwyer: “I’m waiting to score in the last minute, throw my shirt off into the crowd and just go nuts. It would be quite fun seeing the reaction of the guys on the side trying to find another shirt just for the last 30 seconds of the game. But I think I get too many yellow cards in the run of play to do that.”

Ask yourself this: Would any fan complain if one of these celebrations went down after a tally? All of them might be outlawed by the letter of the law, but perhaps there should be a bit of leniency. Sports should be fun. As long as a goal celebration focuses on just that — celebration — rather than antagonizing an opponent, it’s pretty harmless. Let them dance, Commissioner Garber.

And finally, there’s Sebastian Giovinco. He earned votes for his motorcycle celebration, which was later immortalized in FIFA 17.

But while the Toronto FC forward concedes that he occasionally thinks about his celebrations and plans what he’s going to do, he prefers to let inspiration come in the moment. That’s probably good news for TFC manager Greg Vanney. The “Atomic Ant” is on pace for another 20-goal season. Constantly coming up with new inspiration for goal celebrations could get time-consuming.