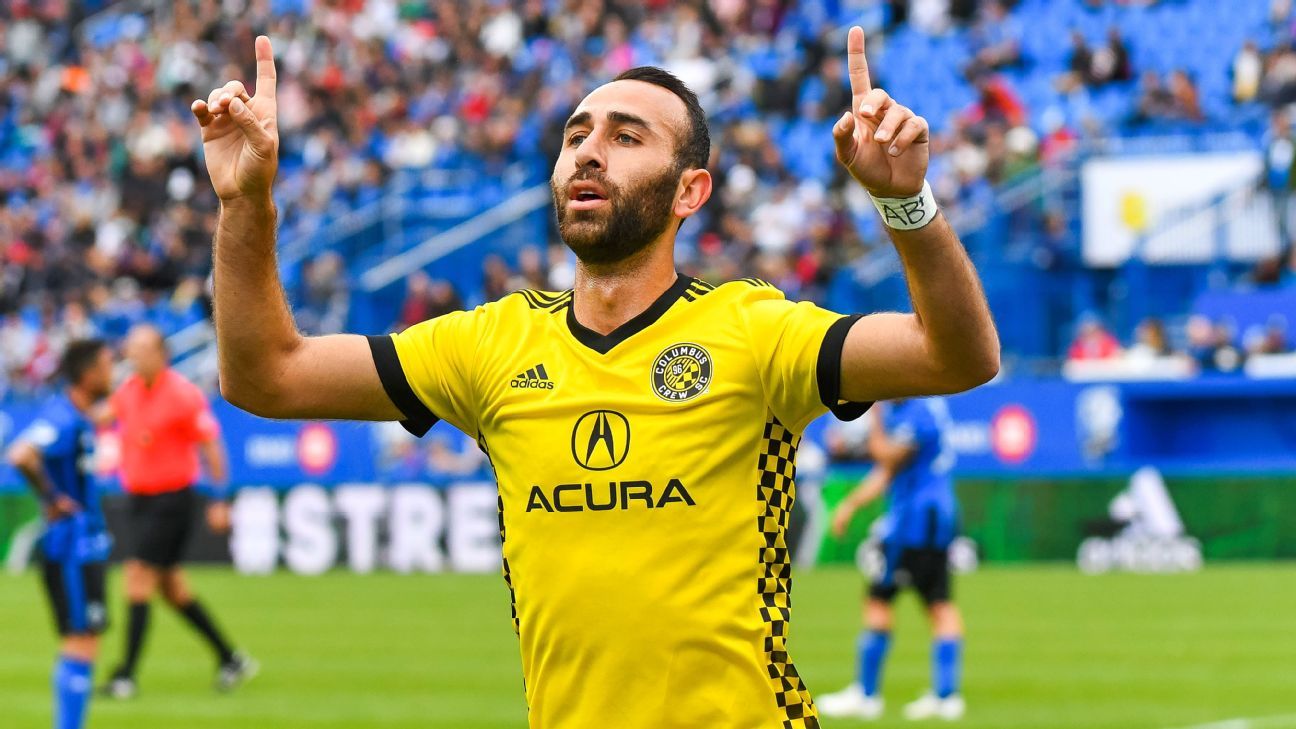 
Justin Meram literally circled the globe during this most recent international window.

To get from Columbus, Ohio, to Bangkok, the Crew SC and Iraq national team forward connected first through Atlanta, then Tokyo before finally landing in Thailand. From there, he flew to Amman, Jordan, by way of Bahrain for another World Cup qualifier against the United Arab Emirates. And then, finally, the return leg: Amman to Frankfurt to Chicago to Columbus.

All told, Meram hopped on eight flights in 11 days, scored a goal and played nearly two full matches for Iraq and is still expected to feature in Columbus’ home showdown against Sporting Kansas City on Sunday (1 p.m. ET on ESPN/WatchESPN).

“It’s always worth it, when you play for a country that has gone through so much hardship, to bring it joy,” Meram told ESPN FC in a phone interview.

Of his goal against Thailand in Iraq’s 2-1 win on Aug. 31, Meram added: “I get chills thinking about it. It will always be worth it.”

If Meram’s itinerary was uniquely arduous among MLS players representing their countries over the past fortnight, his decision to represent Iraq in the first place was also under unique circumstances.

Born and raised in Michigan as the son of Iraqi immigrants, Meram developed a lasting appreciation for his parents’ origin story — though their families were relatively close in Iraq, his parents actually first met on American soil, having come to the country nearly a decade apart.

Their suburb in the northern part of Detroit’s urban sprawl was something of a catchment area for fellow Iraqi Christians, and Meram grew up surrounded by extended family and friends with a keen sense of their shared culture. That community, and the solidarity it fostered, was especially important in the aftermath of the Sept. 11, 2001 terrorist attacks and the U.S. invasion of Iraq two years later.

“It was very difficult for me,” Meram said. “I have a distinct look. You know where I’m from. After 9/11 and the invasion of Iraq, it was difficult. I wouldn’t say that I was bullied, but it was difficult, having that stigma.”

He could have withdrawn from or rebelled against his family’s culture but instead further embraced it. When the Iraq national team reached out in 2013, Meram didn’t hesitate. The U.S. national team had never paid him much mind anyway — perhaps justifiably, at the time, when Meram was still just breaking into MLS and not the potent goal scorer he is today — and it offered a chance to pay homage to his parents.

“I’m very thankful that both of my parents made the sacrifice for a better life,” said Meram, a sacrifice he’s gotten a better sense of while with the Iraq national team. Many teammates in more desperate circumstances long for what he already has. “That could have been me.”

So it was with much consternation that he turned down a call-up into the national team for pair of crucial World Cup qualifiers back in March in the wake of President Donald Trump’s travel ban. Iraq was one of seven Muslim-majority countries targeted by Trump’s executive order, and although it was quickly struck down in federal court — and despite assurances from the Iraqi federation — Meram still didn’t feel secure traveling to Iran for the qualifier against Australia.

“To be honest, it came down to myself, my comfortability to travel during this time of complication between America and many countries in the Middle East,” said Meram, who is a dual American-Iraqi citizen with two passports. “Like many players, you play your best when your mind is free and your anxiety was low. At that time, I wasn’t in the right state of mind. It wasn’t just about the travel ban. It was where I was at personally.”

Meram only just returned to the fold for this past window, for the wins over Thailand and the UAE.

“As things cool off, and I’ve been playing great [with Columbus], the timing was right with this window,” Meram said. “When I explained my side [to my teammates], that was that.”

As Meram alluded to, he’s been on fire with the Crew, too. Coming off a 2016 in which he tallied a career-high 13 assists, Meram has already netted a career-best 11 goals this season with six games still to go. And importantly, Columbus is unbeaten in four matches and in fourth place in the Eastern Conference after missing the postseason a year ago.

That’s part of why, as weary as Meram had every right to be after his week and a half of globetrotting, he sounded rejuvenated ahead of the stretch run.

“It’s nothing new to my body,” Meram said.

Nor is the phenomenon of outsiders calling into question his motives because of his ethnicity. That’s rarely stopped him before, and at 28, in some of the best form of his life and finally back in the Iraqi fold, don’t expect it to do so anytime soon.