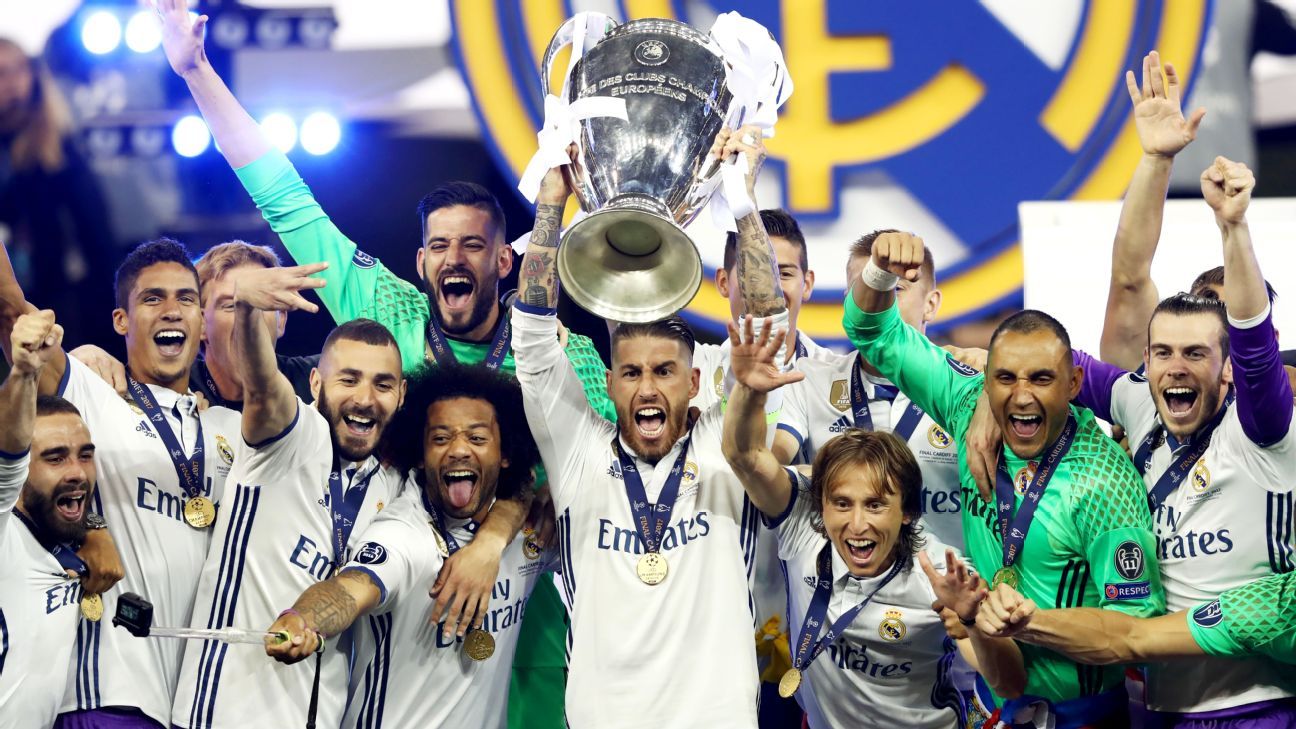 
Already I can imagine fans of hundreds of smaller clubs all around the world getting out the smallest violins in history to sarcastically mimic a song of sympathy, but ahead of the Spanish, European and world champions facing Juventus this week, my argument is that Real Madrid don’t get enough respect.

So many who have to suffer relegation battles, dream of a trophy every eight years — rather than the eight Madrid have lifted since Zinedine Zidane took over. Anyone whose team has conceded five or six at the Santiago Bernabeu will be spluttering into your coffee and doughnuts right now.

Madrid are wealthy, they are mega-successful, they are privileged. Ninety-nine percent of teams they compete against firmly believe that Madrid get friendly refereeing decisions in their favour. As a club, they enjoy huge swathes of favourable, you might even say biased, newspaper and media coverage — they are the establishment.

But they merit oodles more kudos than they actually get for their domination of the Champions League in the past four years.

Ask almost anyone this week: “Are Madrid going to the final again?” and unless they are wearing a black-and-white Vecchia Signora football strip and worshiping posters of Giorgio Chiellini and Paulo Dybala, then they’ll likely shrug their shoulders, nod and answer: “They’re Madrid — it’s what they do!”

Resignation, complacency, expectation. No sense of awe that Zidane’s squad is, arguably, just three good performances from winning a third straight Champions League. Precious little admiration that a team that couldn’t cope with Girona away or Real Betis at home this season is suddenly in shape to dismantle Paris Saint-Germain and also fully capable of eliminating their recurring bete noire, Juventus.

A squad that was at 6s and 7s in terms of attitude, fitness, form, competitive aggression and reliability on either side of the turn of the year is now regularly turning out devastating attacking football, has almost all of its top 18 players on blistering form and goes to Turin bristling with self-belief and ambition.

Listen up, people: it’s specifically not a lesser, easier-to-ignore phenomenon when a club consistently reaches the elite European final and wins it. This isn’t hum-drum, this is history.

This isn’t a byproduct of some institutional favouritism, this is finesse and deeply embedded competitive aggression. We should venerate it for what it is — absolutely remarkable.

I’m pretty sure that I know the reasons that Los Blancos aren’t always given their dues: everyone likes to see giants fall. Underdogs are romantic.

It’s also, admittedly, to Los Blancos‘ detriment that they have only won their national title eight times in the past 28 years — not a great return — and only retained the Spanish championship once in that period. That certainly undermines the sheen of a club’s credibility.

More, when some of Madrid’s lap-dog media trumpet their bias and ridicule other teams, it grates. Some parts of an audience that might otherwise admire, turn their heads and affections away.

Also, people seem to find the caricatures easier to dislike than it is to laud or admire the real characters. Cristiano Ronaldo is a proven phenomenon, possessed of one of the great sporting mentalities we’ve ever seen.

But the haters have him down as a preener, a diva — nothing more than an egotist.

Sergio Ramos is cut from similar cloth. Innately athletic, innately a leader, ferociously competitive, but also very football savvy, indeed. When he first moved to Madrid, as Florentino Perez’s debut Spanish signing, he appalled the old guard by immediately declaring that he wanted to inherit Fernando Hierro’s No. 4, and that he wanted, in due course, to mean the same to the club as the brilliant Andaluz sweeper had done.

And, hey, look now. Ramos has indeed become, I’d argue, just as iconic, just as important to Madrid as his one-time idol was. It’s a massive achievement.

However, he’s more likely to be pilloried for his perpetual love of a red card in La Liga, mocked for his increasingly vibrant fashion sense or dragged into yet another “will they, won’t they” in his trumped-up love-hate relationship with Gerard Pique.

Then there’s the nonsense that Zidane always has to face.

If he resuscitates Marco Asensio and once again trains him up to look like the next great Spanish international, then, immediately, that’s obscured by the tsunami of stories that Isco is being ignored or badly treated or punished. Yin, but no yang.

So far we haven’t had anything suggesting that Zidane is in the huff because Isco once named his dog “Messi,” but expect that any day.

Instead of being quizzed, routinely, about what it takes to fine tune the tactics, rest, training, mental recuperation, competitive hunger and squad morale in order to coach Madrid to three out of the past four Champions League titles; the Frenchman is badgered about signing Neymar. This is a player who is injured, contracted to PSG, doesn’t have a buyout clause and who chose not to join Madrid on the two occasions when he clearly could have done: 2013 and last summer.

I’m old enough to remember the last time a club won three European Cups in a row — not that Madrid have achieved that in the Champions league just yet. First Ajax, then Bayern Munich in a straight line from 1971 until 1976.

Yes there was jealousy, certainly some fans of other clubs resented them, but they were venerated. The star players became iconic, in name, shirt number and haircut.

These Madrid stars are marketed, sponsored and squeezed for financial return until their pips squeak, and the mass-media era means that they are much better known than Johnny Rep or Uli Hoeness were back then. But are Zidane & Co. given as much respect, constructively analysed for their remarkable achievements? I think not.

Very few results, in the entire history of the European Cup and Champions League have stunned the football world like Bayern Munich 0-4 Real Madrid in 2014. Especially after the tight, evenly balanced first leg at the Bernabeu, which Pep Guardiola’s team could easily have won.

Add that to the eliminations of Schalke and Dortmund, and Madrid won their knockout rounds against top German opposition that season on a 17-3 aggregate. Impressive, not to say epic.

Atletico outplayed them for 89 minutes in the Lisbon final that year, but if you want ultradrama, don’t go to the cinema or Netflix — just follow Ramos’ career. You know the goal I mean.

The 2015-16 campaign might have provided fewer elite moments, but Ronaldo’s hat trick to haul Madrid back from the precipice of 2-0 down to Wolfsburg will not easily slip the mind. Then the pageant of colour, noise and football culture in Milan, where it was the second Madrid derbi in two seasons, was a spectacle. Believe me.

Last year saw Napoli utterly demolished, an all-time European classic in the quarterfinal as it ebbed back and forth whether Madrid or Bayern would reach the last four, and then — again — a Ronaldo semifinal hat trick to rob poor old Atleti of their last shreds of romanticism or hope. The Cardiff final was brimful of great goals, titanic competitive spirit and, ultimately, one of the great European Cup/Champions League showpiece displays.

Now Juve are back, doggedly. And many are suggesting that they’ll be firmer, more streetwise rivals than Massimiliano Allegri managed to make them last June. Maybe so, maybe so.

For my money, though, Madrid aren’t just the holders — they’re the group of players who know, and show, how to get the job done.