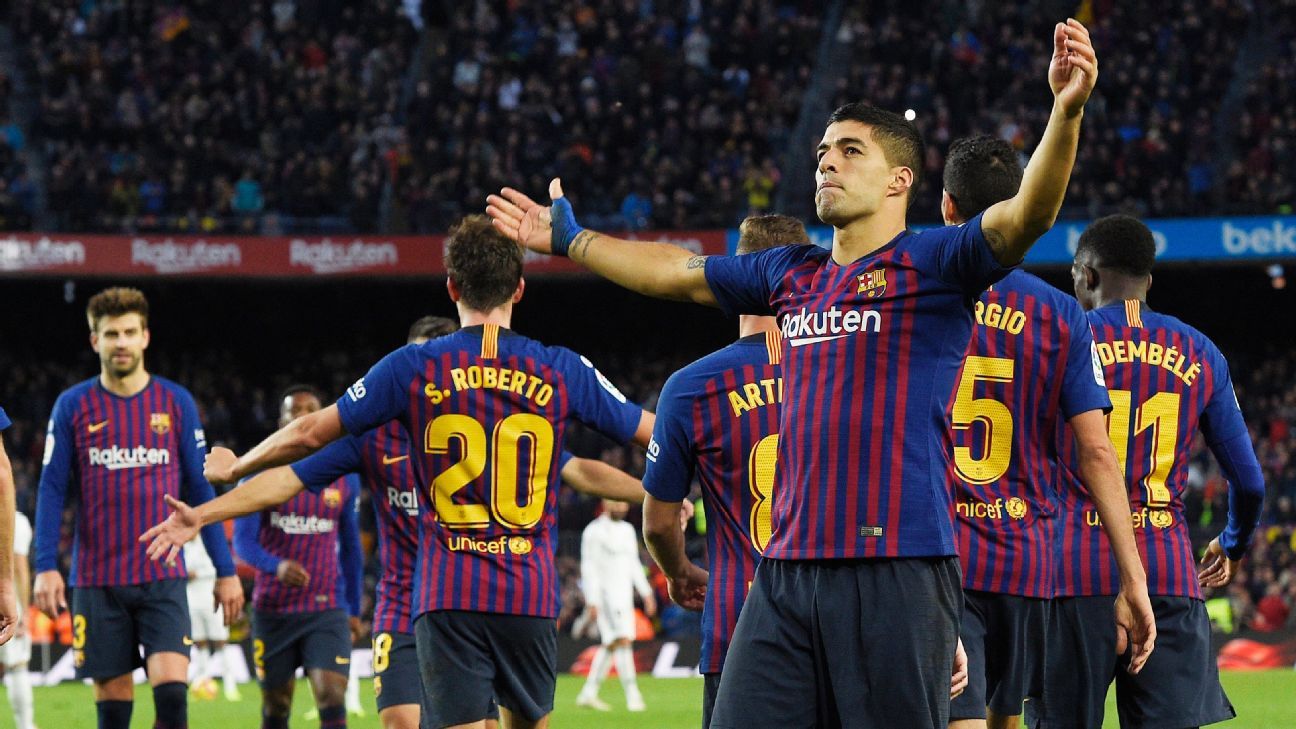 For the first time in 11 years, there was no Lionel Messi or Cristiano Ronaldo on the pitch when Real Madrid took on Barcelona, but there was no dearth of drama in what turned out to be an absolute rout (5-1) for the Blaugrana.

So, could we possibly start from any other place? Here are the best numbers from the 239th Clasico and the rest of the weekend’s football.

Barcelona have won El Clasico for the first time without Lionel Messi since he made his debut in the fixture (1 draw, 1 defeat, 1 win).

Also, the first VAR penalty in Clasico history was won, and scored, by Luis Suarez.

No Messi? No Problem! Excluding the Argentine, Luis Suarez became the first Barcelona player to score a hat trick in El Clasico in La Liga since Romario in 1994.

Also, Real Madrid have lost three straight league matches for the first time since a run of five losses in May 2009.

No one — not even Ronaldo or Messi — has scored more Clasico goals than the nine Luis Suarez has bagged since he joined Barcelona (2014-15). Ronaldo and Messi both have five in that same timeframe.

When it rains… Real Madrid’s 14 points are their fewest after 10 games in La Liga since 2001-02. They are now ninth in the league, seven points behind Barcelona and look a shadow of their former selves.

There were 30 passes made in the build-up to Philippe Coutinho’s goal for Barcelona against Real Madrid, the most of any goal in El Clasico in La Liga since at least 2005-06. Tiki-Taka‘s going nowhere just yet.

There, was, though, plenty of action elsewhere. We’ve captured the best of the lot in 10 fascinating numbers.

That 4-0 defeat to Borussia Dortmund in the Champions League was an aberration, a glitch in the matrix. In La Liga on Saturday, Atletico Madrid were back at it. They are the only team from the top five European leagues yet to concede a goal in the first half of games this season. They won 2-0 at home against Real Sociedad.

Sadio Mane is only the seventh African player to score 50 Premier League goals — his brace helped Liverpool to a comfortable 4-1 win over Cardiff City on Saturday. The other Africans to reach the milestone are Didier Drogba (104), Emmanuel Adebayor (97), Yakubu (95), Yaya Toure (62), Kanu (54) and Efan Ekoku (52).

Magpie madness. Newcastle have failed to win any of their opening 10 matches of a league season for just the second time in their history, last doing so 120 years ago, back in the 1898-99 top-flight campaign. They drew 0-0 with Southampton last weekend.

Both teams are 19th in their respective leagues (both off the bottom only thanks to goal difference).

Same number, different emotion. Kylian Mbappe is the first player to score 10 league goals in Europe’s top five divisions this season after he came off the bench to open the scoring in Le Classique against Marseille for PSG with a brilliant goal.

Yeah, we all live in an Mbappe world.

In 1960-61, Tottenham Hotspur started their league season with a record 11 straight wins. This season, PSG have equaled that record (top 5 leagues).

Fulham have conceded 28 goals this season — the most after 10 games in Premier League history. Their latest debacle? A 3-0 hammering by Bournemouth at home. It has not been a happy return to the top tier for the Cottagers.

Forty is the new 30. Well, for Claudio Pizarro anyway. The Peruvian veteran became the second-oldest player to score in the Bundesliga after he netted one of the consolations in a 6-2 spanking for Werder Bremen at home by Bayer Leverkusen.

Boy, do they love some Toffees. Manchester United have now scored 100 Premier League goals against Everton; only the second team to score 100+ goals against single opponents in the competition (the first? Arsenal. They have 107 — also vs. Everton). On Sunday, United beat Everton 2-1 thanks to goals from Paul Pogba and Anthony Martial.

Luka Milivojevic’s first penalty ended a run of 417 minutes (six hours, 57 minutes) without a goal at Selhurst Park for Crystal Palace in the Premier League. He scored another late in the second half as Palace held high flying Arsenal to a 2-2 draw.

Many home grounds are called fortresses — and they rarely mean anything more than common marketing hyperbole. Anfield, though, has been rather impregnable recently. Callum Paterson’s goal for Cardiff this Saturday was the first goal Liverpool conceded at Anfield in the Premier League in 917 minutes. The last time they let one in at home was against West Ham on Feb. 24.