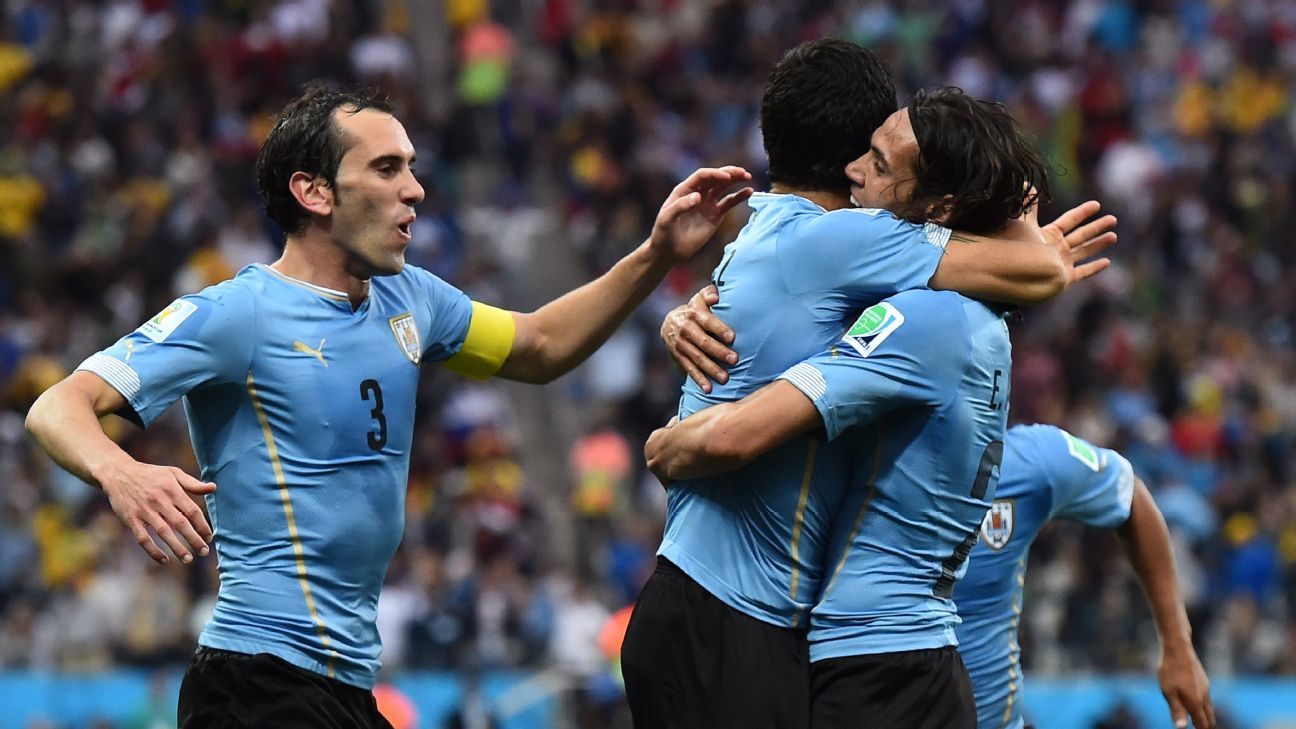 
The 2017 ESPN FC 100 was released on Monday and the reactions have been strong around the football world. Wednesday saw Man City and Belgium star Kevin De Bruyne discussing his ranking as the top attacking midfielder in the world.

On Thursday, Bayern Munich stars Manuel Neuer (No. 1 goalkeeper) and Robert Lewandowski (No. 1 striker) shared their thoughts with ESPN FC. So too did three of the most prominent South American stars in the list, Luis Suarez (No. 2 striker), Diego Godin (No. 4 centre-back) and Edinson Cavani (No. 10 striker), in conversation with Diego Muñoz, a journalist for ESPN in South America.

One of the deadliest strikers in the world, Luis Suarez shared some of the reasons for his success but also commented on his friendship with other top stars in La Liga, such as teammate Lionel Messi of Argentina and Uruguay teammate Diego Godin of Atletico Madrid.

ESPN FC: What is it like to play with Messi, someone who has been called the greatest in the history of the game?

Suarez: I feel a mixture of pride and admiration for everything he does. I read and anticipate his plays expecting he will do whatever he wants. It is definitely a privilege to share a team with him, who for me is the best ever.

ESPN FC: Recently, a video of you joking with Messi’s son during the Golden Boot awards went viral. What is the origin of your friendship with Leo?

Suarez: I think it was born out of mutual respect as colleagues but it grew stronger with hours of early morning talks, including those sharing mate, a drink that forges a relationship. Every time I look back, I realize he has been great to me from day one in this club.

ESPN FC: And that helps to play better together…

Suarez: Of course! Several times I have been in a position where I think of someone else “if he does not talk to me outside the field, why would I give him the ball now?” The relationship you build outside definitely shows inside.

ESPN FC: Talking about friendship, you once mentioned you do not like to face Atletico Madrid and Diego Godin in particular. You are good friends outside the field, but what happens once you are on opposite sides?

Suarez: That is something I try to put on hold once we are playing. I won’t do anything wrong, but if I can get and edge, I will. I even had him sent off once! [Suarez laughs]

ESPN FC: How would you describe your style of play and your approach to the game? What makes you such a lethal striker?

Suarez: I’ve always played the same way and didn’t try to change when I became a pro. I remember when I joined Ajax I did not try to play nice: my style was always physical. I wanted to get an edge, tried to be first to the ball. And I never say “enough!” whenever I accomplish a goal. Rather than stopping and relaxing, and I could have done that several times, I carry on and focus on the next objective.

ESPN FC: Being so successful in this city, Barcelona, is surely special for you, since this is where you and your wife met again.

Suarez: It is, for sure. Sofia and I reunited here after so many sacrifices when I started my professional career. We are now living a dream, happy together after so many hardships. And I never forget that she is the one that keeps me focused, reminding me that there is life after soccer and that I need to be a better husband and father every single day.

Uruguay has a world-class defender, leader and captain in Godin, a must-have in the FC 100 ranking for top centre-backs. We asked him about his beginnings in the game and the clues for the success of his national team.

ESPN FC: Does the name William Lemos ring any bells?

Godin: Of course it does! He was the one who trusted me to become a central defender in Cerro. I tried to join the youth divisions of Defensor as a midfielder and failed. I went back in disappointment to Rosario, my home town, but my father said that I should keep on trying. He got me a chance in Cerro as a right midfielder and got in, then I moved to central midfield until in a game, one of our central defenders was sent off and I played the last minutes there.

William Lemos saw something in me for the position; as games went by I felt comfortable and never looked back.

ESPN FC: Still, how difficult was it to move to Montevideo at a young age?

Godin: For someone from the provinces, it is always tough to move to the capital city. You miss your friends and your family a lot. But it made me grow up. Something clicked on my head and I realized I had an enormous opportunity.

ESPN FC: If it shaped your character, it probably helped you become the captain you are today. How do you work on being a good leader?

Godin: There is always a natural leadership that comes from being appreciated and respected in a group. And then you add what you get by watching and listening to others and having teammates who help you become better.

ESPN FC: Besides, you lead a team that has a tremendous will and power to fight against adversity…

Godin: In Uruguay, that is probably genetic. And this national team has rebounded back from several slumps. Starting with the qualifying process for World Cup 2010, we learned to talk to each other, find solutions and move on to become better every time.

ESPN FC: That 2010 team made a great run that ended in fourth place and won Copa America a year later. In 2014, after getting past England and Italy in the group stage, the Suarez suspension seemed to hit hard. What are your expectations for 2018?

Godin: I think Uruguay has now not only world-class players, but also a perfect blend of youth and experience, as well as world-class players. When you go to the World Cup, you want to enjoy the event but at the same time, you have maximum expectations: you need to go and be convinced that you’re going to win it.

Cavani is one of the strikers in the FC 100’s select list. He talked about what makes him such a prolific scorer and life in Paris… including, of course, Neymar.

ESPN FC: You have been in Paris for some years now and it looks like at the stadium, PSG games are parties…

Cavani: The club has worked on it and it is really a very enjoyable atmosphere. Besides, we have been getting results and that helps: we are all on the same page.

ESPN FC: And your scoring record gets better every season. Has that helped you gain more recognition?

Cavani: Being recognized and admired by the fans is something that fills me with happiness. But apart from the goals, I always had my clear objectives as a professional and sometimes it’s not easy to get results quickly. You need time.

ESPN FC: What are your thoughts, if any, as a striker when a scoring chance is near?

Cavani: You always imagine the play as it develops. And when you see the closing moment comes, you are ready. I always try to get to that moment in the best position possible and that depends on how you have read the play seconds before. It is a mental strategy.

ESPN FC: And as a player, you once said you tried to be the best, or at least know that you had devoted your best effort to being so…

Cavani: That is a definition that talks about how you want to face life. You want to be the best but not feel the best. Give your 100 percent, respect others and go to bed in peace.

ESPN FC: This takes us to a topic that has been discussed broadly — your relationship with Neymar. I heard you say that you do not need to be friends with everyone but just give your best in every game.

Cavani: In soccer, and especially at this level, you don’t have to go out looking for friends or allies. I believe collective goals are above individual goals. You have to be a professional and give everything at every training session and game. Whatever we achieve as a group is what will resonate with the fans and make history for the team.

Personal trophies may go home with you but tomorrow, your son may throw them away just because he doesn’t like soccer! [Cavani laughs]