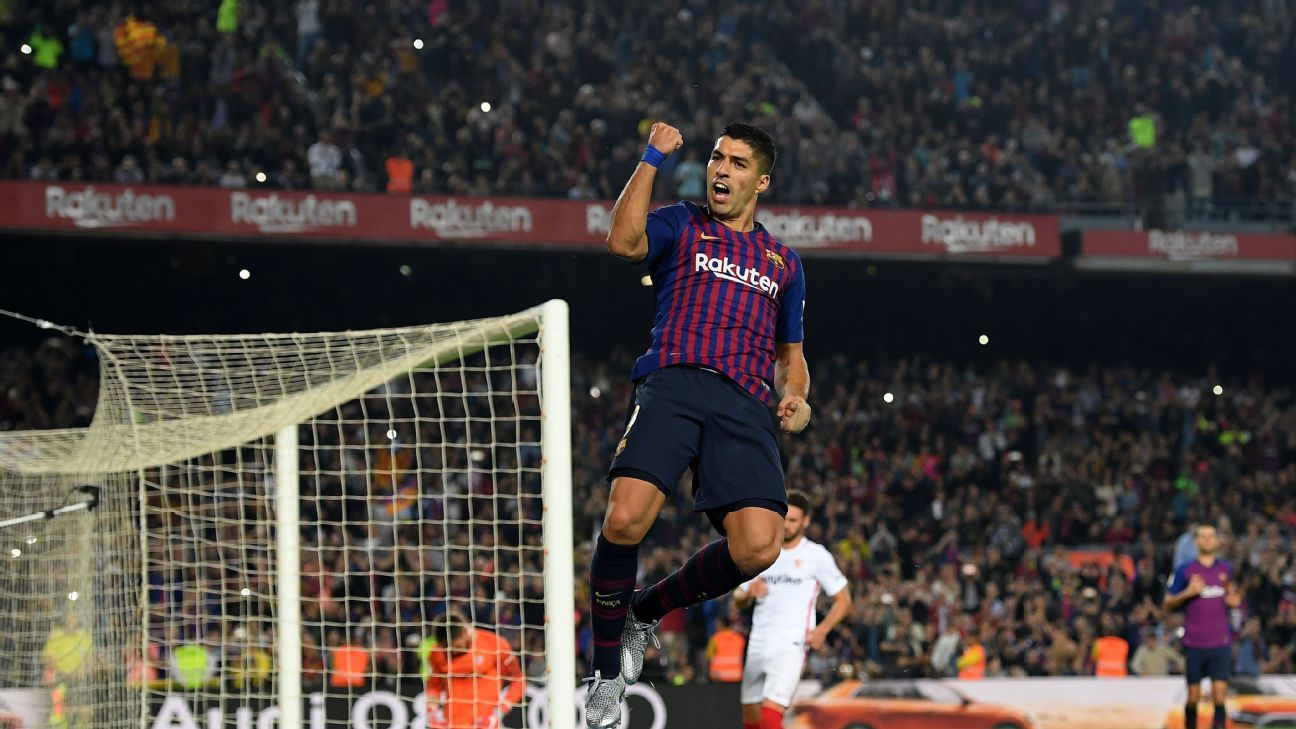 
Barcelona moved back to the top of La Liga with a 4-2 win Saturday against Sevilla but they were left with concerns over an injury to Lionel Messi.

Messi set up Philippe Coutinho for the opener and scored the second himself before being forced off with an arm injury after 26 minutes.

Luis Suarez added Barca’s third from the penalty spot in the second half after a remarkable double save from Marc-Andre ter Stegen at the other end.

Sevilla pulled one back through Pablo Sarabia, with Ivan Rakitic and Luis Muriel exchanging late goals in between another fine double stop from Ter Stegen.

With Real Madrid and Atletico Madrid both dropping points earlier in the day, Barca were able to take advantage of their rivals’ slip-ups with a win against another direct rival. The victory brings a four-game winless run to an end and they go into next weekend’s Clasico against Madrid at the top of La Liga.

Suarez’s performance was also a reason for encouragement, as were Ter Stegen’s heroics. Is there a better goalkeeper in the world right now?

Messi’s injury will keep worried supporters up on Saturday. With Inter Milan and Real Madrid to visit Camp Nou in the next week, Barca need their Argentine talisman. Any serious injury would be a nightmare for coach Ernesto Valverde.

Speaking of Valverde, he will be concerned with how his side managed the game, conceding goals needlessly when they had a good lead.

6 — Valverde picked his best side and the players, just about, delivered. However, his team didn’t always look in control of the game despite their advantage on the scoreboard. Will have to answer plenty of questions if he’s left without Messi for any length of time.

GK Marc-Andre ter Stegen, 9 — Wow. Made not one but two vital double saves in the second half. The only blot on his performance is the two goals he conceded — although he could do little about either.

DF Nelson Semedo, 7 — Has made the right-back spot his own in recent weeks. His pace is an outlet in attack, but it also helps provide cover in defence for the centre-backs. Some great moments against Sevilla.

DF Gerard Pique, 7 — A more reliable performance than some of his recent ones. No mistakes and some good defending. Barca will need him on song against Inter and Madrid.

DF Clement Lenglet, 7 — With Samuel Umtiti and Thomas Vermaelen injured, he’s Pique’s only partner at the moment. Did well and can consider himself unlucky to have deflected home Sarabia’s consolation goal. Made a brilliant interception at 3-1 late on.

DF Jordi Alba, 6 — A recent switch in shape has benefitted him, but he was one of the players to suffer most from Messi’s departure. His link-ups with the Argentine are such a big part of Barcelona’s game.

MF Sergio Busquets, 7 — Still not at his best but made some vital interceptions. One moment comes to mind when he swivelled and plucked the ball out of the air to stop a Sevilla counter.

MF Ivan Rakitic, 6 — On the fringes of the game before he popped up to score an impressive volley in the final five minutes, killing the game off.

MF Arthur, 7 — Increasingly becoming part of the Barcelona midfield. A third comfortable appearance in the middle of the park, with an outside-of-the-boot pass to Ousmane Dembele the pick of his night’s work.

FW Philippe Coutinho, 7 — A splendid finish to open the scoring but didn’t show as much as Valverde would have liked after Messi was forced off injured.

FW Lionel Messi, 8 — Had already set up the opener and added the second when disaster struck. Fell on his arm awkwardly after clashing with Franco Vazquez. After several minutes of treatment, the decision was made to take him off.

FW Luis Suarez, 9 — A vintage performance from a striker who has been called into question this season. Scored and won a second-half penalty but offered so much more than just his goal. Set up Messi’s effort with a fine pass and caused problems with his twisting, turning and passing all evening.

FW Ousmane Dembele, 6 — Came on earlier than expected due to Messi’s injury. Had an instant impact, slaloming through the Sevilla defence and slicing into the side netting. Other than that he lost the ball too much, irritating the home crowd.

MF Sergi Roberto, 6 — Returned from a back injury as a second-half substitute for Arthur. Sat in midfield and kept things simple.

FW Munir El Haddadi, N/R — A late introduction for Suarez. Had one chance, but his shot was blocked.