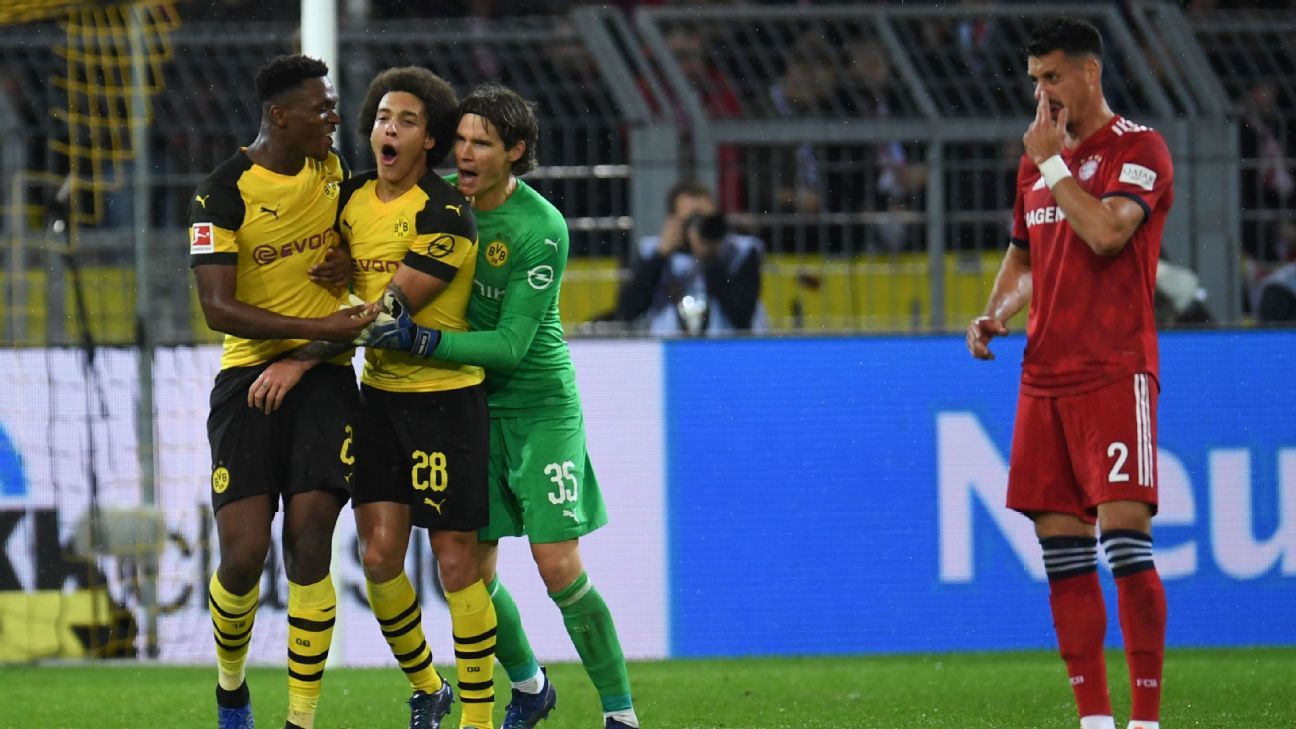 
DORTMUND, Germany — Dortmund coach Lucien Favre said that his team deserved to win in a thrilling Klassiker over Bayern Munich, calling it a “crazy game” and an “advert for the Bundesliga.”

Saturday’s night lived up to the billing as the Black and Yellows managed to separate themselves by seven points over their Southern rivals in a 3-2 come-from-behind victory.

Bayern striker Robert Lewandowski headed past goalkeeper Marwin Hitz after 26 minutes for a deserved lead with the guests dominating the opening 30 minutes. BVB captain Marco Reus equalised in the 49th minute from the spot after being brought down by Manuel Neuer but the Polish centre-forward found another response just three minutes later to reclaim the lead.

Dortmund, however, overpowered a tiring Bayern team. After 67 minutes, Reus once again equalised and in the 73rd-minute substitute striker Paco Alcacer slotted past Neuer for the 3-2 final score.

“[Hat’s off] to my team and how they fought back after two setbacks,” Favre said in a post-match news conference. “After 95 minutes I can say that it was not an undeserved win — after the first half, my assessment would have been the opposite. Bayern dominated the game for 30 minutes. They played with an enormous intensity in that period.

“I’ve seen many games of them but I haven’t seen them as strong before as in the first half hour. I was glad that we were only 1-0 down at halftime because I knew that they were not going to able to keep their pace up. That and some adjustments were the reason why we were much better in the second half.”

The BVB coach fielded midfielder Julian Weigl in midfield next to Axel Witsel with the intention to retain possession against Bayern but his plan backfired. At halftime, Mahmoud Dahoud replaced Weigl as the hosts wrestled back control.

“Dahoud controlled the game well together with Axel Witsel in the second half. That was instrumental for our win,” Favre said.

Despite the win, the coach warned that the seven-point lead over Bayern was no cause to talk about the title race as his team “has a lot of details to improve.”

Meanwhile, team captain Marco Reus explained after the match that the vocal Dortmund fans were a crucial help in the win.

“The fans were outstanding. Before the game, I had hoped that they would put it one notch up and they did. In the second half, the boost of the fans gave us the courage to press Bayern hard and force them into errors. We needed our fans today and they delivered. With the euphoria from the stands, we were able to hunt the Bayern players and force them to revert to long balls as they chased the game in the latter stages,” Reus said.

Reuss added: “In the first half, you didn’t see much of Bayern’s struggles also because we invited them. We lacked courage and hardly pressed them but that changed in the second half and then Bayern’s problems became evident.

“I need to score but it’s Manuel Neuer in goal — that makes a difference but in the end, I can smile about it because we won. The team spirit is really exceptional — even though Bayern are not in top form, it’s special to come back against them twice. We will now really enjoy the win. “

While the Dortmund camp remained coy on accepting the role as favourites to win the title, Bayern centre-back Mats Hummels told reporters after the game: “Everyone can read the table. I think it’s safe to say that it’s a realistic scenario that we won’t win the league this year.”

BVB head into the international break with a four-point advantage over second-placed Borussia Monchengladbach.