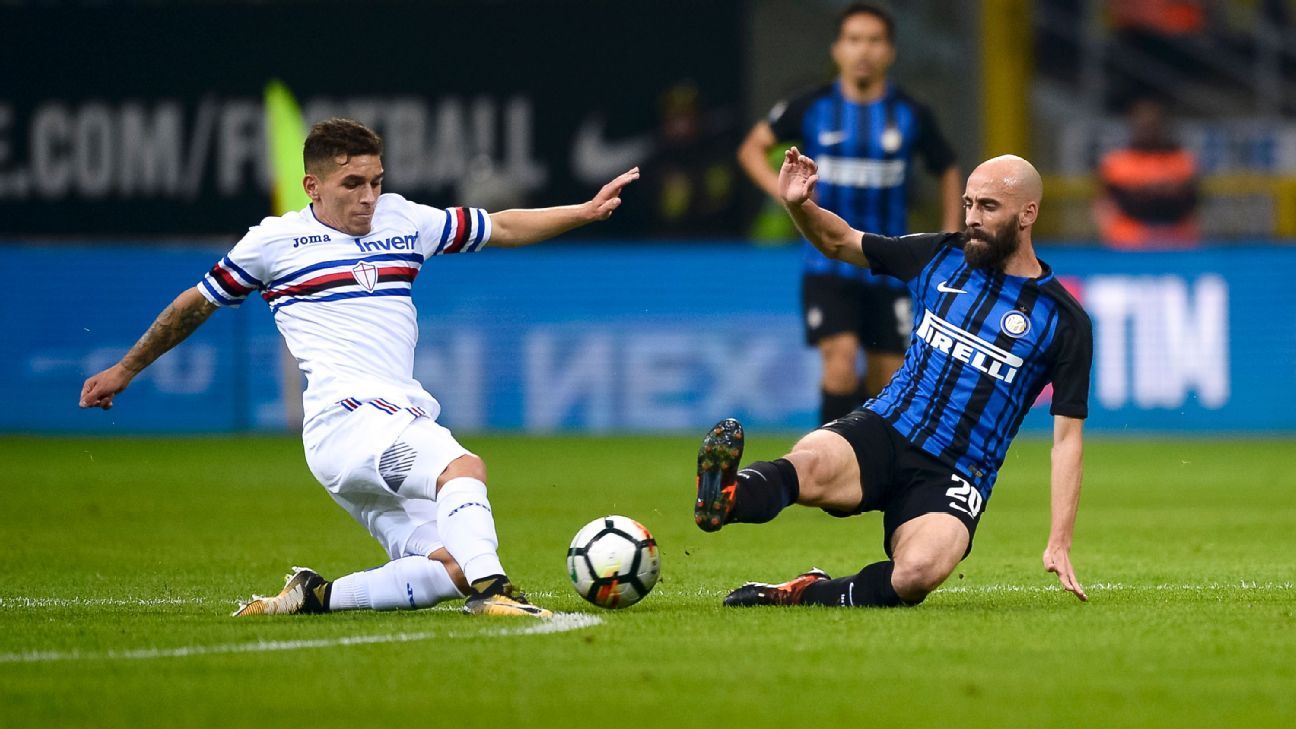 Arsenal could finally have found the defensive midfielder they’ve been looking for, with reports in Italy claiming the Gunners are stepping up their interest in Sampdoria’s Lucas Torreira.

News agency Ansa claims the Uruguay international is moving “closer and closer” to the Emirates after Sampdoria reached a deal for Lovro Majer as his possible replacement.

While any potential move to London still seems to be a way off, Torreira makes for an intriguing prospect for a Gunners side who are badly in need of a natural ball winner in the middle of the park.

Here are five things to know about the 22-year-old Uruguay international:

The first thing that’s notable about Torreira is his size. At 5-foot-5 (1.68 metres), he’s not a massive physical presence. But there’s still plenty of steel in the Uruguayan, who uses his size (or lack thereof) to great effect. He is a natural ball winner with an uncanny ability to nip in at the feet of his opponents to win possession, and has the quickness to harass attackers across the pitch.

His diminutive stature means he’s not much of an aerial threat in either box, but Arsenal are used to that: Santi Cazorla and Francis Coquelin weren’t tall either. Paired with someone like Granit Xhaka or Aaron Ramsey, Torreira’s size shouldn’t be an issue — although playing him next to the similarly short Jack Wilshere could be difficult in the physical Premier League.

Mix between Kante and Verratti?

Torreira’s playing style often draws comparisons to Chelsea’s N’Golo Kante, although his defensive statistics aren’t quite as good. Torreira averaged 2.8 tackles and two interceptions per game in Serie A last season according to Whoscored.com, compared to 3.3 tackles and 2.5 interceptions for Kante. And some people think he’s more similar to Paris Saint-Germain’s deep-lying playmaker Marco Verratti — including the scout who helped bring him to Sampdoria. Roberto Druda told Calciomercato last yearthat “[Former Pescara manager] Massimo Oddo and many others are convinced that Torreira can be even stronger than Marco Verratti.”

Experienced for his age

Torreira, 22, has been a regular starter in Italy for the last three years. He joined Serie B club Pescara in 2014 from Montevideo Wanderers and stayed there on loan for the 2015-16 campaign after transferring to Sampdoria — cementing a first-team place with 29 league starts.

He has been a crucial part of Sampdoria’s midfield for the past two years, starting a total of 71 Serie A games.

New Arsenal head coach Unai Emery has made it clear he wants to deploy an aggressive press when Arsenal are without the ball, and Torreira fits that kind of system well. Sampdoria have been one of the hardest-pressing teams in Serie A for the last few years, with the Uruguayan a key part of those tactics. He has the speed to close down attackers quickly and is excellent at instigating counter-attacks once the ball has been won back.

Torreira only made his debut for Uruguay in March but he has been tipped as one of the players who could have a breakthrough at the World Cup in Russia. That would probably increase competition for the midfielder, meaning Arsenal could be eager to get a deal done before the tournament starts. Reports in Italy say Torreira has a €25 million release clause that needs to be paid in one go, but that the Gunners are trying to negotiate a deal where they pay slightly more but spread the installments out over the next few years.