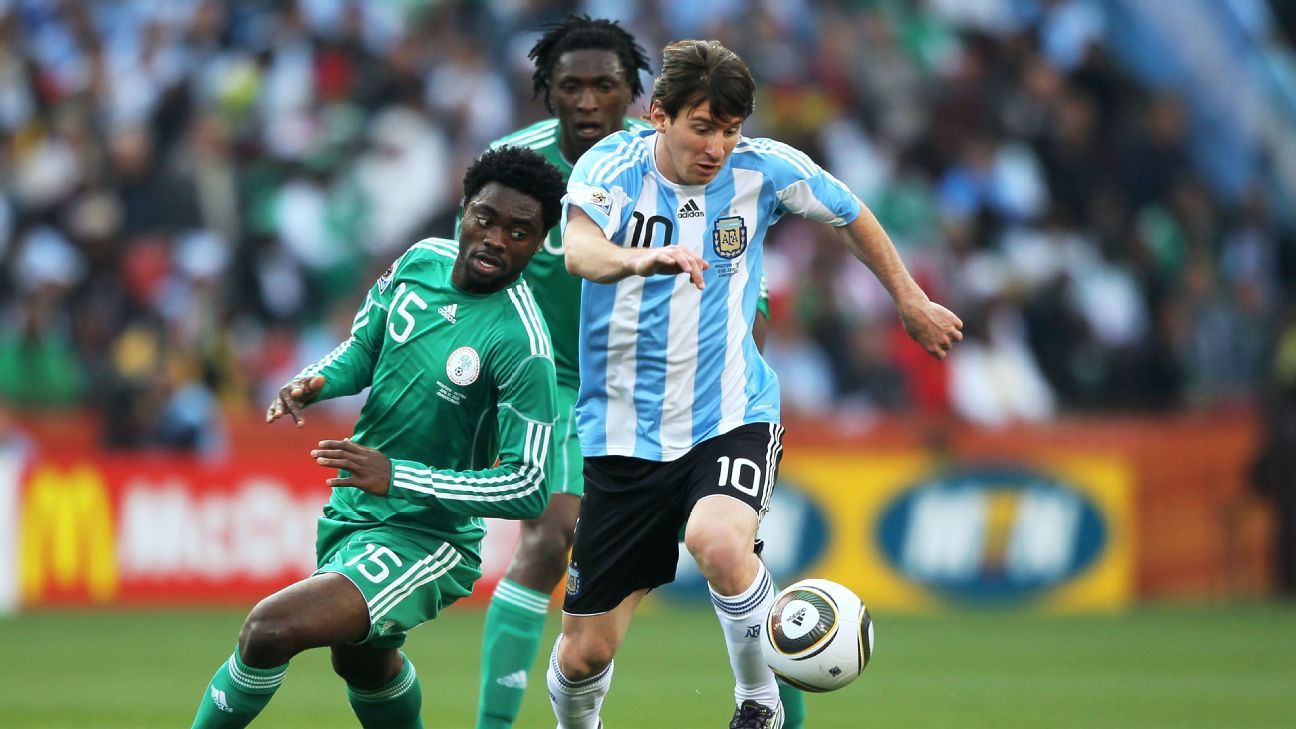 
Nigerian football has never been inured from controversy, especially at major tournaments.

Their first FIFA World Cup appearance in 1994 saw allegations of indulgent behavior come to light post-event; in 1998, players revolted against Philip Troussier and his “unfamiliar” deployment of the 3-5-2 formation, leading to the last-minute appointment of Bora Milutinovic; and then 2002, when coach Amodu Shuaibu and about two-thirds of the team suffered a cull for supposed indiscipline and disrespect.

Those events of 2002 were particularly earthshaking, as they led to the early International retirement of many of Nigeria’s “Class of 94”, who were part of the Super Eagles‘ legendary 1994 Africa Cup of Nations and World Cup story.

But for the first World Cup to be held on African soil, Nigerian football ramped things up to a whole new level of drama.

Chaos reigned absolutely, from qualifying through to their last day of participation, with events leading up to, during, and after the 2010 World Cup in South Africa, taking controversy and scandal to depths never before plumbed.

With all the drama happening off the pitch, it was no surprise that Nigeria limped out at the group phase, as on-field events played catch-up.

Unlike their three previous appearances, 2010 World Cup qualifying for the Super Eagles proved to be a very laborious experience — at least during the final phase.

Amodu, who had been fired as coach in 2002, after qualifying Nigeria for the World Cup that year, had been recalled in the wake of German Berti Vogts’ departure; but his conservative approach to games did not align with the fans’ or federation’s thirst for expansive attacking football, and his firing appeared to be a matter of when not if.

His side ran neck and neck with Tunisia for the single group ticket until the very last kick of the qualifiers, and Nigerians, impatient as ever, were understandably stressed and calls grew for his sacking.

At the World Cup Draw in Cape Town, I asked Nigeria Football Association (NFA) chairman Aminu Maigari and general secretary Taiwo Ogunjobi if they had enough trust in the coach to keep him.

“He has qualified us for the World Cup, I don’t see any reason why he should not be there,” Maigari responded, with Amodu beside him.

Two months later, Amodu was out and Swede Lars Lagerback was in.

But even that process was fraught with contention.

Forner England managers Glen Hoddle and Sven-Goran Eriksson, who were high on the list of prospective coaches approached for the job, each claimed they had turned down the offer because they had been asked to publicly inflate the value of their contracts.

While that was ongoing, scandal broke over the quality and state of preparedness of the lodgings the NFA (as the Nigeria Football Federation was then known) had picked as the team’s base camp. A newspaper investigation had discovered irregularities, and the federation was forced to cancel and pick a new hotel. They did so against FIFA advice, however, hence the NFA was fined $US125 000.

If only that were the end of it.

On the football side, Lagerback had to reject claims that he had picked skipper Nwankwo Kanu under pressure from football officials, and, to carry on with the theme of disorganization, multiple pre-tournament friendlies were announced and then cancelled.

No prizes for guessing that things took a turn for the worse during the one game that did take place: A stampede broke out during the friendly against North Korea, leaving one policemen crushed and at least half-a-dozen fans hospitalized.

That was a foreshadowing of what was to come, on the field at least.

They looked to be well on course and cruising when Kalu Uche gave them the lead, but then it went pear-shaped when Sani Kaita inexplicably kicked out at Vassilis Torosidis.

The midfielder was shown a straight red card, and Greece smelled blood and immediately took advantage — rallying to a 2-1 win that left Nigeria’s qualification hopes hanging by the slimmest of threads and Kaita fielding death threats from home.

Then followed the most infamous moment of any World Cup for Nigeria.

Needing a win against South Korea in their last group game to qualify, Yakubu Ayegbeni found himself presented with a golden chance for a tap in; with the goalkeeper sprawled helplessly, and the Yak barely two yards from goal, the striker unbelievably side-footed the ball wide.

Thousand of Nigerians at the stadium and millions more at home were paralyzed in shock. Yakubu became the poster child for Nigeria’s 2010 World Cup shambles, and his moment of infamy was immortalized by Nigerian rapper MI.

Even before the team slunk back home, desolate after finishing bottom of the group, they were met by news that new president Goodluck Jonathan had announced a two-year ban on international football. That decision was reversed after threats of a counter-ban by FIFA, and, thankfully, it was the final chapter of what had been a dreadful few months for Nigerian football.

As bad as all of that was, it did serve the purpose of providing useful lessons for the country going forward; all but issues of bonus payments were resolved before the 2014 tournament.

The Nigerian Football Federation also hired a match agent to whom they outsourced the organization of friendly games and tournament lodgings. Which partly explains why in 2018, there were practically no issues at all.

So the good news is that Nigeria appears to have learned the lessons of their 2010 campaign, and the scandals and controversies may have served some good purpose in the end.