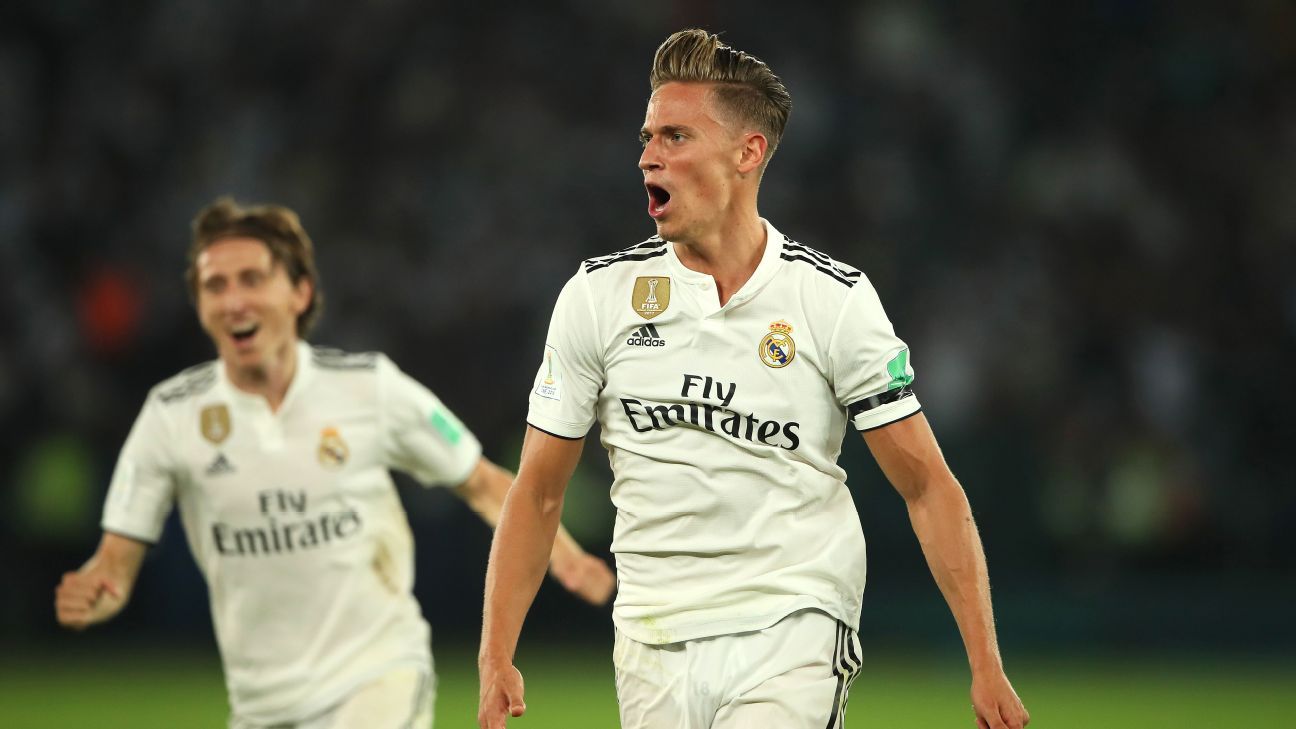 A fourth CWC in this current format means Madrid have won this tournament in its current format more than any other club — most important, they’ve won it more than La Liga rivals Barcelona. Goals for Modric and Llorente were just rewards for their previous efforts this year.

Sloppiness in defence could have seen Al Ain take a shock early lead. Being at this competition means a shorter winter break for Madrid than all their domestic rivals, with the rearranged La Liga fixture meaning they return to action with a tricky trip to Villarreal on Jan. 3.

7 — Santi Solari will have pleased his boss Florentino Perez both by winning a first trophy as Madrid manager just a couple of months after moving up into the job, and also by giving Brazilian starlet Vinicius Jr some minutes in the global spotlight.

GK Thibaut Courtois, 7 — First called into action with 74 minutes played, when he rushed from line to block well from Al-Ain forward Caio. Could do nothing about excellent header from Tsukasa Shiotani, which gave hosts a late consolation.

DF Dani Carvajal, 7 — Always plays at full intensity and kept pushing forward all game, while having little to do in defence.

DF Raphael Varane, 7 — Fortunate not to be punished for poor early touch in his own box, but otherwise untroubled with Al-Ain’s Swedish forward Marcus Berg barely having a touch.

DF Sergio Ramos, 7 — Made a goal-line clearance with the score still 0-0 and then used a goal celebration after typical trademark header at a corner late on to “shush” local fans who had been whistling at him all game due to his past with Liverpool and Egypt attacker Mo Salah.

DF Marcelo, 6 — A smile when his attempt to catch Al-Ain goalkeeper Khalid Eisa off his line from 50 yards at 2-0 up showed how seriously he was taking all this. But it was his misdirected header that gave Al-Ain their early golden chance.

MF Luka Modric, 8 — Ended a pretty great 2018 for him personally by curling home the opening goal with his left foot from the edge of the box. He may have had another with a sweet volley set up for him by a pinpoint Toni Kroos corner as the party tricks came out.

MF Marcos Llorente, 8 — His focus and commitment was never in doubt as the youngster covered each blade of grass and got just reward, catching a dropping ball 18 yards out just perfectly to make it 2-0 for his first senior goal for Madrid.

MF Toni Kroos, 8 — First player ever to play, and win, five CWC finals, and did not have to break a sweat as he and Modric controlled the game completely from the centre of the park.

FW Lucas Vazquez, 6 — Hit the post from close range in early stages, while again being more prominent for his energy and workrate than his quality on the ball.

FW Karim Benzema, 7 — His lay-off for Modric opener was Benzema’s 100th assist for Madrid. He may have scored himself, but he was another Real player who knew this was in the bag from early on.

FW Gareth Bale, 7 — Kept trying to mark the occasion with something special and almost matched his UCL final goal with another spectacular bicycle kick, only this time, the ball flew just too high.

MF Dani Ceballos, 7 — On for Kroos with 20 minutes remaining and enjoyed the party with the game long over.

FW Casemiro, N/R — The fit-again, former first-choice holding midfielder replaced the excellent Llorente in the closing stages. How Solari handles that situation will be very interesting to follow in January.

FW Vinicius Jr, N/R — The future superstar (Madrid are hoping) got the last few minutes in the spotlight, with his direct run and mishit shot provoking the late own-goal by Al-Ain defender Yahia Nader.