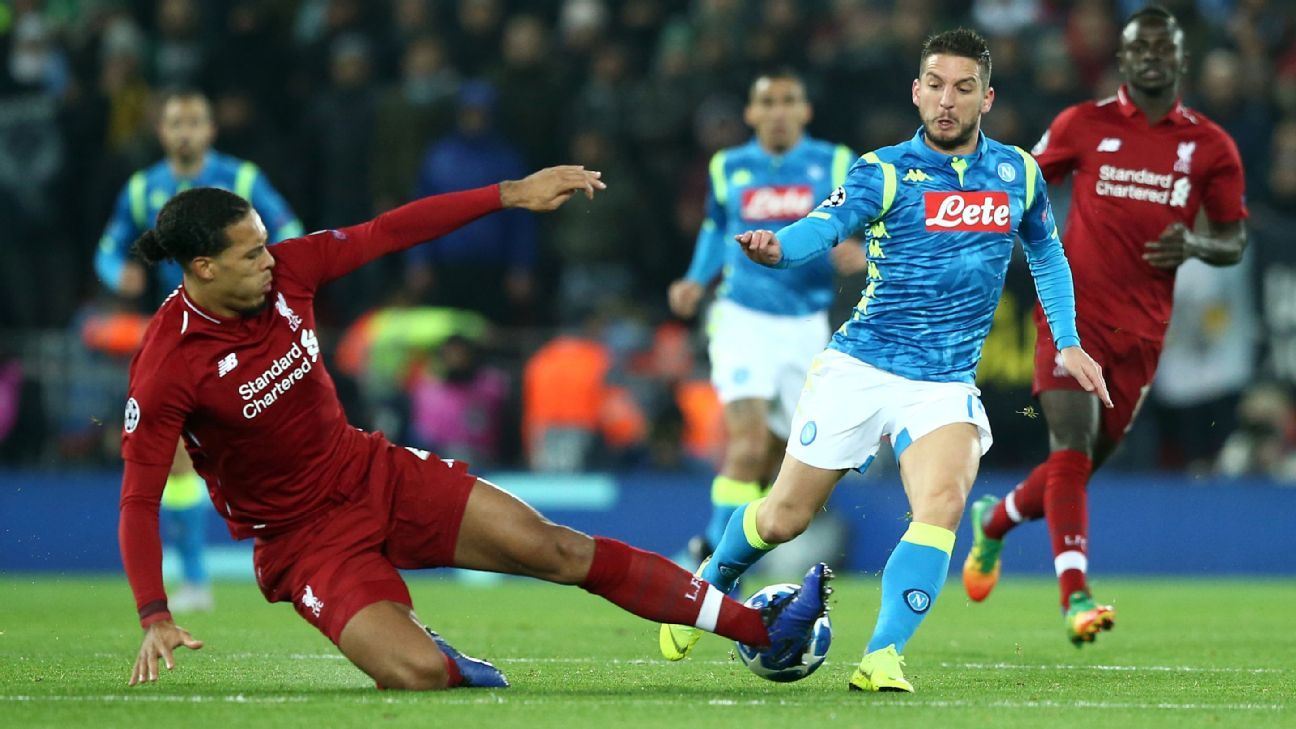 
LIVERPOOL, England — Virgil van Dijk believes his challenge on Dries Mertens early in Liverpool’s 1-0 win over Napoli on Tuesday was a fair tackle.

Mohamed Salah scored the only goal of the game in the 34th minute at Anfield to send Liverpool into the round-of-16 of the Champions League, although they could have been down to 10 men before the goal was scored.

With 13 minutes on the clock in the must-win tie, Van Dijk slid in on Mertens, winning the ball before catching the forward high on the ankle in the follow through.

“I don’t think it was a bad challenge at all,” Van Dijk said. “Unfortunately I touched him, but I would never go in to hurt him or anything like that.

“I had the ball and obviously [with] the wet pitch you slide through and I touched him, but that’s football.”

Slovenian referee Damir Skomina saw the challenge and showed a yellow card to the Liverpool centre-back.

The booking means Van Dijk will be forced to sit out the first leg of Liverpool’s round-of-16 tie.

“Unfortunately I’m suspended now for the first game,” Van Dijk said. “I heard it after the game so I was a bit disappointed about that.

“But we have plenty of quality players to fill my gap.”

Napoli manager Carlo Ancelotti disagreed with the referee’s decision and could not take solace in the fact video assistant referees will be used in the knockout stages of the Champions League.

“From the video, it is a red card,” Ancelotti told a news conference. “There are a lot of questions about VAR, but when VAR comes in the Champions League it will be too late.”

Meanwhile, Van Dijk saluted the heroics of Alisson for his stoppage-time save to deny Arkadiusz Milik from close range and preserve Liverpool’s Champions League status.

Liverpool manager Jurgen Klopp said his £65 million goalkeeper was a “lifesaver,” with Van Dijk expressing his gratitude to the Brazil international immediately after his crucial intervention.

“[Alisson] was there to do his job,” Van Dijk said. “The save was unbelievable, you saw my reaction as well, it’s very important to have such a guy behind.

“I think it was a bit of a classic performance. In the Champions League. In the home games we played, we showed our class. Big chances, a lot of pressure, a lot of great moments.

“They needed one goal so it could fall [apart], but in the end we did well and we got the job done.”