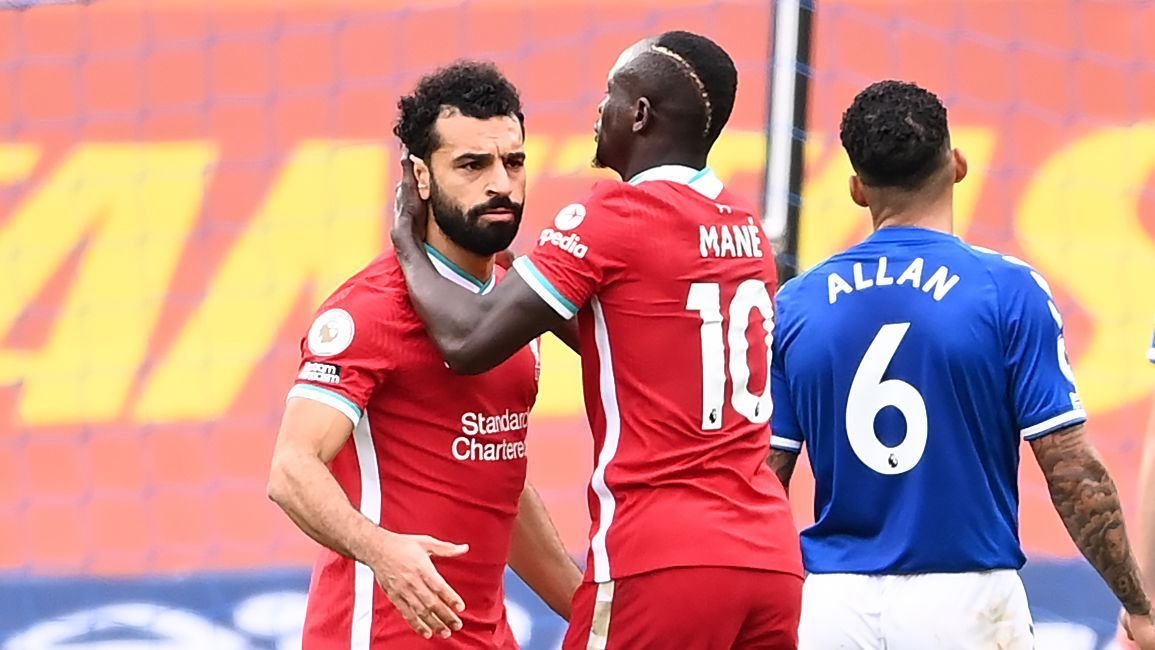 
Liverpool were held to a 2-2 draw with Everton in a dramatic Merseyisde derby at Goodison Park on Saturday.

The Premier League champions as Sadio Mane clinically put them ahead in the first few minutes, but things quickly took a downturn as Virgil van Dijk was forced off just minutes later as a consequence of Jordan Pickford‘s challenge, which went unpunished by the officials.

The frustration of that was added to when Michael Keane got an equaliser for Everton when the England defender’s header was too powerful for Adrian in the Liverpool goal.

The Reds were able to get another goal, thanks to Mohamed Salah‘s brilliantly struck half-volley in the second half. However, the Toffees got back on level terms again through Dominic Calvert-Lewin‘s late header.

Jordan Henderson thought he had secured the three points with a late winner, but it was ruled out for offside.

Liverpool’s brilliant start was exactly what they would have wanted on such a big occasion — especially after the 7-2 defeat at Aston Villa before the international break. The visitors were able to control the ball for large periods of the game and carried a major threat.

Losing Van Dijk was a massive blow in the match for Jurgen Klopp and his team, and they will be hoping the Netherlands defender isn’t out for too long. It was perhaps a consequence of the injury, but there were periods in which Liverpool looked shaky defensively. Allowing Everton to score a late equaliser will be a massive source of frustration, which is only compounded by Henderson’s late goal being ruled out.

6 — Klopp will likely leave this game feeling very frustrated, as his side let their lead slip twice. He wasn’t helped by Van Dijk’s injury, but this was far from a perfect Liverpool performance. Everton do deserve credit for that.

GK Adrian, 5 — Was beaten by the power on Keane’s header when he could have had stringer hands, and looked fairly nervy throughout.

DF Trent Alexander-Arnold, 5 — Showed his quality from set-pieces, but he looked below-par in general play for periods of the game, letting Lucas Digne get behind him for Everton’s second equaliser.

DF Joel Matip, 6 — Looked confident for much of the match, making sure that Dominic Calvert-Lewin didn’t get too many chances. Was denied a goal of his own by an incredible save from Pickford.

DF Virgil van Dijk, N/A — Made an aggressive start to the game but took a big hit from Pickford and was taken off in the 11th minute after a long delay.

DF Andrew Robertson, 8 — Such a threat down the left for Liverpool, picking out Mane for the opening goal of the game. He also put in a strong defensive performance, making a last-ditch challenge on Calvert-Lewin.

MF Jordan Henderson, 8 — Battled brilliantly throughout and showed real quality in his passing. Clearly got under Andre Gomes‘ skin. Thought he’d scored the winner but was denied by VAR.

MF Fabinho, 6 — Was far too weak in letting Keane get above him for the equaliser, but he performed fairly well throughout. Was booked for a foul on James Rodriguez.

MF Thiago Alcantara, 8 — Instantly looked comfortable in his first Merseyside derby, showing real quality and imagination with the ball at his feet. He’s someone Liverpool fans are going to enjoy watching.

FW Mohamed Salah, 8 — Having wasted some decent opportunities, the Egypt forward popped up with a brilliant strike to score Liverpool’s second, his 100th goal for the club.

FW Roberto Firmino, 6 — Linked the play well and was unlucky not to have an assist to his name before being taken off.

FW Sadio Mane, 8 — Announced his return to the team with a clinical early goal, before going to show just how important he is to Liverpool’s general play. Was booked for a foul on Digne.

Joe Gomez, 7 — Replaced Van Dijk in the 11th minute and had a slow start, but looked solid once he settled into the game.

Diogo Jota, N/A — Replaced Firmino in the 78th minute and got some good touches on the ball, but ultimately couldn’t make the difference for Liverpool.