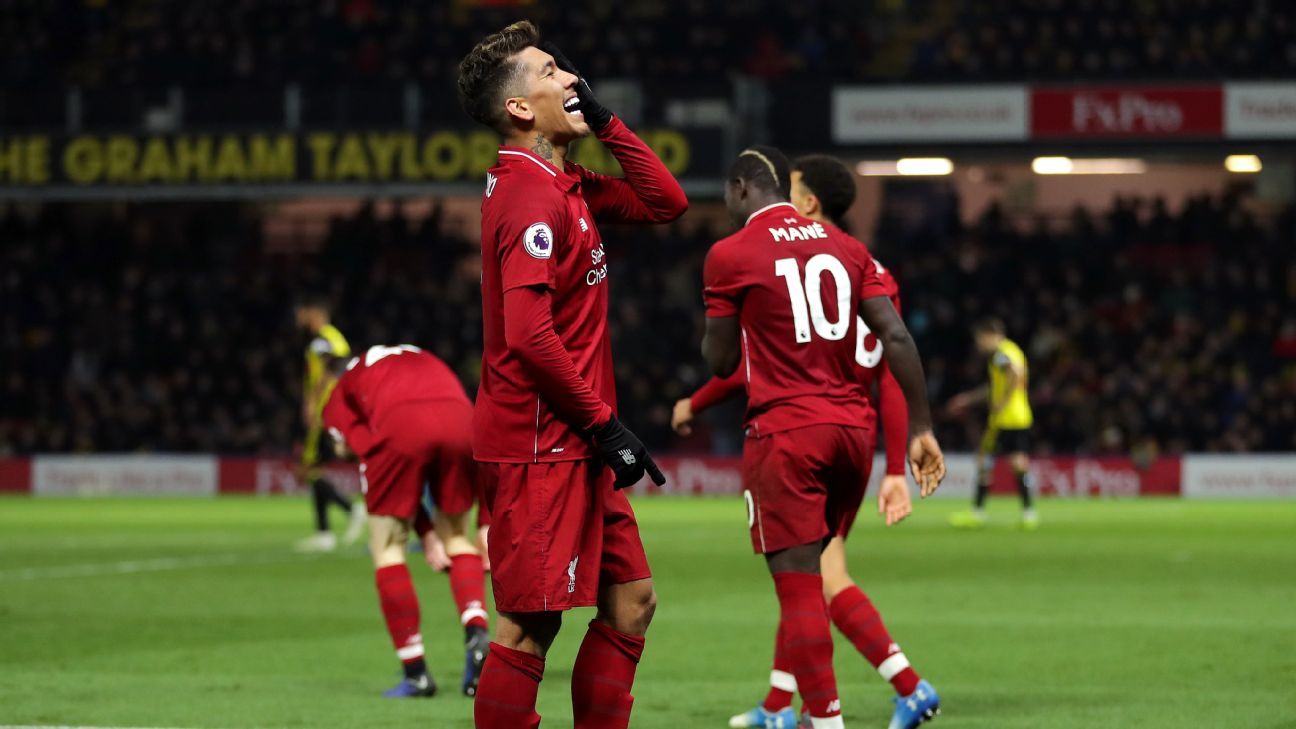 
WATFORD, England — Jurgen Klopp said Liverpool’s record-breaking start to the season is “outstanding” as they continue to keep pace with leaders Manchester City.

Liverpool took this season’s points tally to 33 — the most the club have had at this stage of a Premier League campaign — with a 3-0 victory over Watford on Saturday.

Mohamed Salah broke the deadlock in the 67th minute at Vicarage Road with his ninth goal of the season before Trent Alexander-Arnold made it 2-0 with a brilliant free-kick. Jordan Henderson was sent off for the visitors eight minutes from time, but Roberto Firmino secured the three points with a header right at the death.

“It’s nice,” Klopp said of his team’s start at a news conference. “The 33 points are brilliant. Outstanding. The goal difference is really good.

“At this fantastic big club with their outstanding teams in the past, that this group of players can get this record is nice.

“We all know the season isn’t finished, and those records don’t bring anything. But if somebody wants to end this record in the future it must beat this team. It’s not bad, but we will carry on. For the moment, it’s really nice.

“At 2-0 up, [going forward] it wasn’t too smart, but we wanted to win and keep the clean sheet as well.

“I really think this group of players, they deserve it. Today they did a really good job, and I like this game a lot because it was so difficult.”

Liverpool’s performance and second-half flurry of goals against Watford was particularly pleasing for Klopp, given the lack of preparation time.

Klopp said the team had just one full training session to prepare for the game following the international break.

“Maybe I should not talk about it but to explain how difficult things are, we had exactly one session to prepare this game,” Klopp said.

“Because they came back on Thursday — the Brazilians and Robbo [Robertson], for example. One session with a specific demands of set-pieces.

“After halftime, we have to do it again and again, better of course with more rhythm change. That was not brilliant in the first half, we could have changed the rhythm and we had to change it much more often. It was still good.

“The first goal was brilliant, the second goal was a world-class free-kick. And the third goal was one of the best counter-attacks I ever saw — it was just nice. 3-0 couldn’t have been better.”

Henderson made his first Liverpool start since October and the captain’s dismissal — two bookings for cynical fouls in the second half — will see him miss next weekend’s Merseyside derby at Anfield.

“I think they were both yellow cards, but things like this happen,” Klopp said. “You play in a defensive-midfield situation and I don’t know how many challenges Hendo had today or situations where he had to be closing the player or space. Twice, he was there with a hand. He made a tactical foul.

“With the second one, I didn’t like too much because we wanted to change in that situation. Fabinho was ready and then he got it.

“Things like this happen. It’s nothing serious. The only not-so-nice thing is that he cannot play against Everton. That’s already accepted, so nothing to say about that.”

Meanwhile, Klopp said Joe Gomez missed the game at Vicarage Road as a precaution after suffering a minor knock in training on Friday.