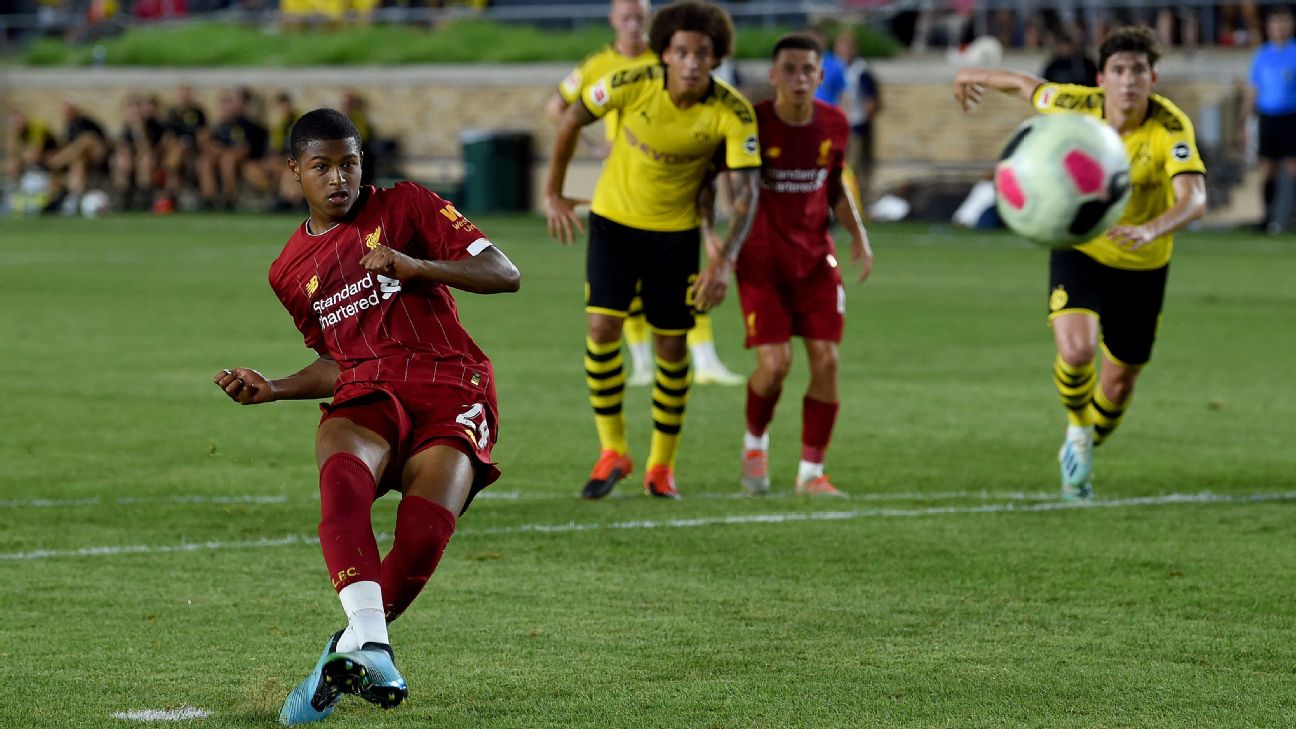 
When Liverpool reported for preseason on July 6, Rhian Brewster walked through the players’ entrance at Melwood with one overriding thought: “This is it.” The 19-year-old wasn’t just readying for a new campaign but for the opportunity to establish himself in Jurgen Klopp’s plans, a possibility that had been cruelly delayed by the striker suffering meniscus damage in his knee and severely strained ankle ligaments while representing the under-23s in January 2018.

During a gruelling 15-month rehabilitation period that included two operations, Brewster zoned in on the day he would arrive at the training ground for the beginning of what would be his breakthrough season. That mental picture provided solace during setbacks and acted as a source of motivation too.

Klopp had regularly spoken to the England youth international about his return to full fitness, and the teenager would visualise his comeback with midfielder Alex Oxlade-Chamberlain, who also was recovering from a serious injury. But Brewster’s mind wasn’t solely occupied by lining up for Liverpool’s first team.

Approaches for his services flooded in despite his status as a long-term absentee, and he needed to carefully consider them. Borussia Monchengladbach went public with their interest, but several other clubs including RB Leipzig, Monaco and Juventus also were keen on signing the Golden Boot winner of the Under-17 World Cup, who had played a big role in England’s glory two years ago. He was not interested in status or financial incentives, only a realistic pathway to regular minutes, something the German clubs in particular pitched hard.

Brewster was faced with a similar choice when he was 14 in Chelsea’s youth academy. A casual conversation with his father, Ian, led to the realisation there were no signs of progression for the club’s most talented starlets at Cobham. No matter how good the player believed he was, he knew he would reach a ceiling before reaching the first team and decided his development would be better served at Liverpool. After months of deliberation, he came to the same conclusion about his advancement last summer and signed a new, five-year deal to remain at Anfield.

Ironically, Chelsea’s transfer ban has forced club legend-turned-manager Frank Lampard to trust their academy graduates. Top prospects Tammy Abraham and Mason Mount are finally in the spotlight at Stamford Bridge, while Brewster has had to be patient for game time this season.

Brewster was on the bench in the Super Cup final against his former club, but he hasn’t had a run-out yet, which is expected to change in the Carabao Cup tie at League One side MK Dons on Wednesday. (Stream live on ESPN+ at 2.45 p.m. ET).

Brewster was 16 when he first elicited a “What a player!” shout from Klopp, who was at Kirkby to watch Academy sessions and had his eye trained on the “wonderfully skilled boy, real striker, good finisher with fantastic work ethic.” An invitation to train with the first team at Melwood followed, where Brewster scored a hat trick in a friendly against Accrington Stanley behind closed doors.

In April 2017, Brewster was an unused substitute against Crystal Palace in the Premier League, with Klopp stating: “He has a lot of respect in the squad. Nobody thought, ‘Who is this?’ They know him because he is an ugly opponent, a difficult-to-play opponent in training sessions.”

It was Klopp’s decision to have Brewster undertake his rehabilitation at Melwood, where he could not only receive the best treatment but get a high-definition understanding of what it takes to be an elite senior professional. He was not a guest at Liverpool’s “football HQ” in west Derby but was treated like a first-team player in every respect; he just hadn’t made his debut yet. It was this care and investment that convinced Brewster staying at the club would be his best shot to become a top striker, even though it was the route with the most difficulty.

Pushing past one elite attacker is challenging enough, but the task is especially tricky behind the automatic first-choice front three at Anfield. Liverpool have remained committed to helping Brewster make the next step even as their status soars domestically and on the continent under Klopp. Daniel Sturridge, Danny Ings and Dominic Solanke were moved out of the club to ensure a smoother passage for the youngster, who was in the squad against Barcelona for the Reds’ Champions League semifinal comeback at Anfield as well as in the showpiece final against Tottenham in Madrid.

During preseason, Brewster offers glimpses of why there is so much faith in him at Liverpool. A quick-reaction finish against Bradford City and a supremely confident penalty against Borussia Dortmund aligned with him being the standout player in a 6-0 victory over Tranmere Rovers with two goals and an assist. The goals and impact weren’t lost on Klopp.

“Rhian is a top striker, he is a top talent and I have told him already that he has an important role this year, but how important depends on him,” the Liverpool manager said. “He has to play different positions, as well; the centre, the wing is possible, I think. We will see how we line up, but there will be opportunities for him, I am sure.”

Understandably, those chances haven’t presented themselves yet: Liverpool’s strong start in the league, with six wins from six, has them already opening a gap on Manchester City and the chasing pack. Their opening group game in the Champions League, losing 2-0 at Napoli, was the club’s most difficult test yet, but with four fixtures in the next two weeks before the October international break, Klopp can confidently turn to Brewster.

When he was just seven years old, West Ham, Arsenal, Charlton and Chelsea all were circling around the small, skinny kid with an insatiable desire for goals who grew up in Goodmayes and Dagenham, before his family put down deeper roots in Romford.

Brewster’s father was a goalkeeper who played at a semiprofessional level and also a Liverpool supporter. When West Ham learned of his dad’s background, they invited the pair to watch a game at Upton Park against the Reds as part of an attempted charm offensive. Brewster took photos with players of both teams afterward, but one image remains a standout: The seven-year-old wearing a Hammers jacket and a beanie stands smiling in front of Steven Gerrard, who has his arms on the boy’s shoulders.

Fast forward and their paths would dovetail at Liverpool, where the club legend became manager of the under-18s and oversaw the progress of the young forward.

“I love being around Rhian,” Gerrard said in November 2017. “I think he’s a great kid, and he’s got a great mentality to work hard and improve. That’s how you get success as a footballer.

“My job and everyone else’s job at the club is to keep his feet on the ground and hopefully push him in a direction where he can be successful for the club.”

Elite sides have academies stocked with gifted youngsters who never quite make the A-grade, but there is more to Brewster than his movement, nose for goals, ability to run in behind or play short and his diligence without the ball. He is confident, incredibly mature and plugged in to the world around him. Brewster also has been unafraid to speak up on social issues, including the homelessness crisis. “It’s important to show love and care to people,” he said. “There’s already too much hate and negativity out there.” And he has used his voice against discrimination on several occasions.

Klopp has called Brewster “brave,” and at the Football Writers Awards in May 2018, the manager said: “He spoke about racism in modern football with the same power, command and composure that he shows when playing.”

Teammate James Milner previously has praised Brewster’s desire to learn, noting: “He listens to the guys around him who are trying to help him.” Dortmund’s Jadon Sancho, who lined up alongside Brewster at the U17 World Cup, said: “He spends time after training, practising and practising his technique. I always used to see him out on the pitches. Penalties, free kicks, he took them all.”

Oxlade-Chamberlain even credited the teenager with lifting him through his darkest days during rehab, while Melwood sources have told ESPN the club’s next batch of promising teens — chiefly Harvey Elliott and Ki-Jana Hoever — already look to Rhian for guidance. Meanwhile, prominent and award-winning UK rapper Dave has referenced him in the lyrics of the song “God’s Eye.”

It’s a lot of fuss around a 19-year-old with zero first-team appearances, but Brewster is itching to properly introduce himself and illustrate there is merit to the belief in him.

That starts at Stadium MK on Wednesday.