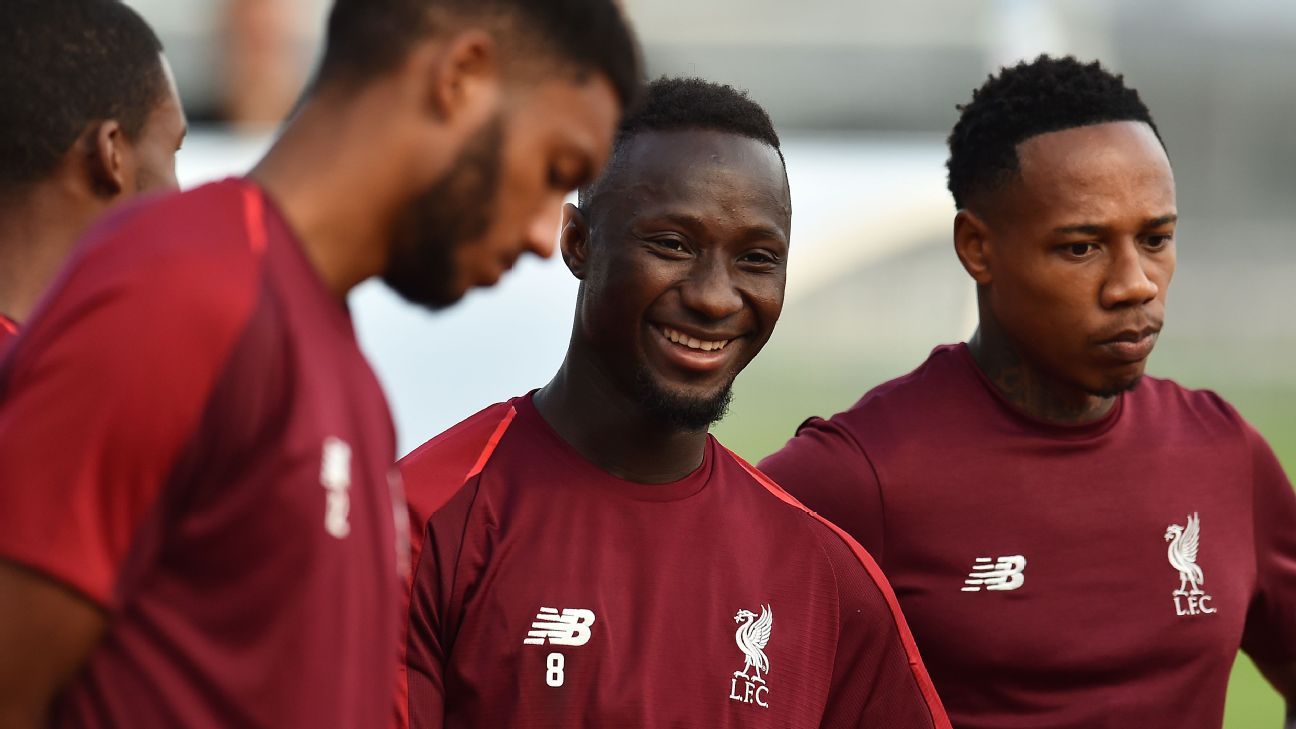 The midfielder was forced to sit out Liverpool’s final two friendlies of their preseason tour of the United States with a stiff neck sustained during an eight-hour flight delay from Charlotte to New Jersey.

But Keita was involved in Liverpool’s 90-minute training session on Thursday morning in Evian as part of their five-day training camp.

The club are hopeful the Guinea international can feature in their penultimate friendly of the summer on Saturday when they play Napoli in Dublin.

Adam Lallana, Marko Grujic and Joe Gomez did not take part in team training on Thursday morning, but a source told ESPN FC the trio were part of specially-tailored sessions.

The source added that players being taken out of certain sessions is part of the plan carefully devised by the coaching staff.

Liverpool’s session at the Stade Camille Fournier began around 11 a.m. local time and began with a lengthy warm-up. Pepijn Lijnders, who returned to Liverpool’s coaching setup earlier in the summer, then led the team through fast-paced, small-sided drills.

Mohamed Salah’s clinical finishing in the workout was loudly cheered throughout by the small group of Liverpool supporters observing, as was an attempted bicycle kick from Sadio Mane.

The fans were allowed to watch training from a distance under the condition that they did not take photography or film any part of the session.

Mane and manager Jurgen Klopp then signed autographs and posed for photographs afterwards before making the one-kilometre cycle back to the team hotel.

Jurgen Klopp and Sadio Mane stay behind after training to sign autographs and pose for photos. #LFC pic.twitter.com/V7wxlSor4B

All four goalkeepers on the tour — Alisson, Loris Karius, Kamil Grabara and Caoimhin Kelleher — stayed behind after the outfield players had left to do extra work with goalkeeping coach John Achterberg.

Liverpool’s Premier League opener against West Ham United is 10 days away, and midfielder Lallana believes he is part of a team that is more than capable of ending the club’s six-year trophy drought.

They have added Keita, Alisson, Fabinho and Xherdan Shaqiri to their squad this summer and secured the future of Mohamed Salah when the Egyptian signed a new five-year contract last month.

“I’m delighted to be at a top club like Liverpool that are going to be challenging for trophies again and I’m looking forward to playing for England again,” Lallana said. “For my club, I just want to take the next step now. We’ve been in a few finals that we haven’t been victorious in and that needs to change.

“We’ve got all the ingredients there, the experience we’ve gained and the squad we’ve put together, the signs are really good for us to go the next step.”