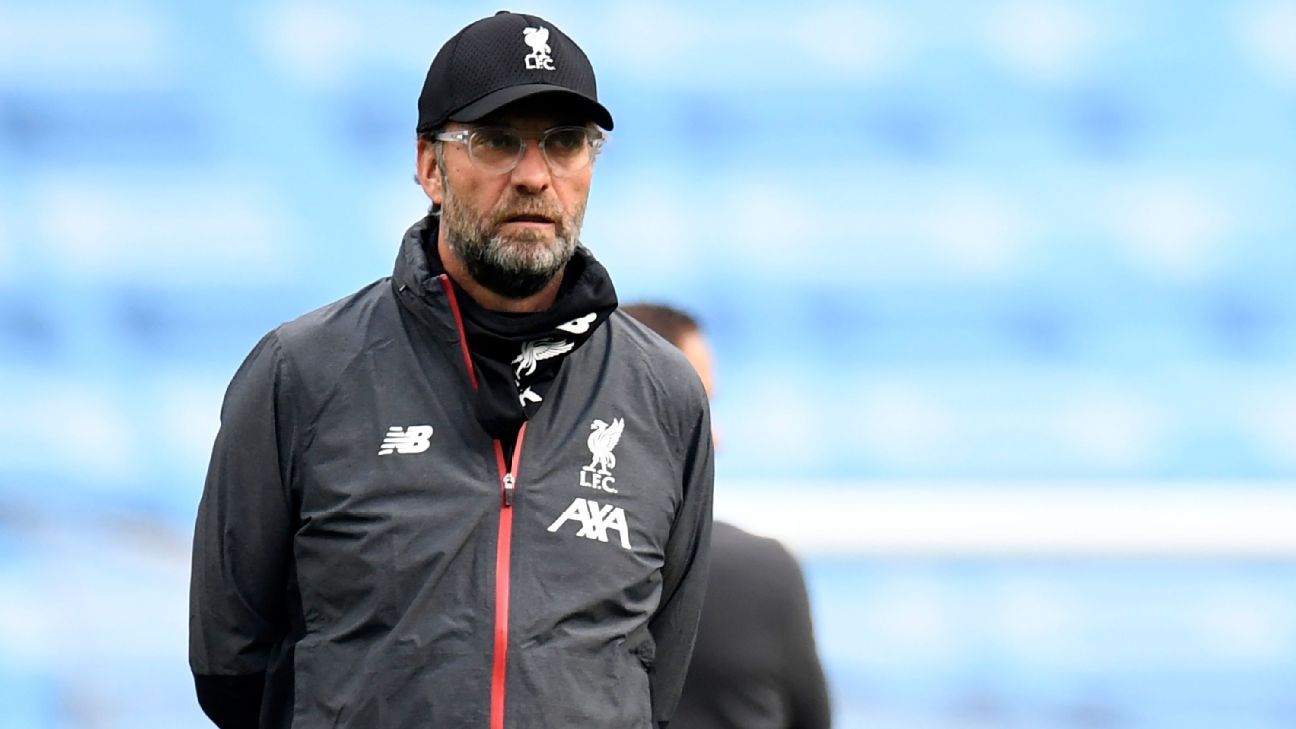 
Jurgen Klopp has said Liverpool will not be giving “Premier League games away like sweets” and will not rotate players for the sake of it despite having the league title secured.

Liverpool won the Premier League with seven games to spare but were handed a heavy 4-0 defeat at Manchester City on Thursday evening. With Aston Villa lying in wait on Sunday as they look to boost their hopes of survival with a win at Anfield, Klopp insisted he will not be using the remaining games to take a look at players on the fringe of his squad.

What did you miss? The latest from Europe’s top leagues
Insider Notebook: Pogba open to new United deal

Klopp was asked if promising youngsters like Neco Williams, Harvey Elliott or Curtis Jones may get starts in this season’s last six games, but the Liverpool manager said he will not mix up team selection despite having the league in the bag.

“I don’t think these kinds of questions will be asked to Frank Lampard or Ole Gunnar Solskjaer — we are the champions now, we should be bringing in the young boys, give them a chance, have a look…then perhaps we lose the games and everyone starts going at us, saying we lost focus,” Klopp said. “We want to win football games and to do that we need the best players on the pitch.

“They [the young boys] are so close, they really good and they are the future 100% but they will not play now because I want to see them in a Premier League game. We don’t give Premier League games as Christmas presents. We cannot do that. We are really in the competition and it’s not only about other teams, we just want to do that and win.

Klopp admitted he was “not in a good mood” after the match at the Etihad on Thursday evening and woke up like that on Friday but his demeanour improved once he arrived at Liverpool’s Melwood training ground and attention had turned to Villa.

Liverpool will seek to stretch their remarkable record of winning every home league match this season when they welcome Villa, but the club used Friday’s prematch news conference as an opportunity to remind fans to stay away from the ground as the country continues to battle against COVID-19 and wait for the right moment to celebrate their first title in 30 years.

“Now is not the time for any of us to be complacent,” Ashton said. “I want to thank the overwhelming majority of fans and residents of this great city those who have listened to public health messages, and now remind everyone those messages still stand. Avoid crowds, they have the potential for the virus to spread much more easily and if you’re not well, stay at home and get tested.

“This Sunday and for the rest of the season I’m asking everybody to stay at home and watch the match with your loved ones. We can have a big party when this is all over, but that time is not now. Be kind, be safe, be responsible.”

Klopp added: “We have to show responsibility still and we if we have to do something good for our loved ones, we will do it, 100%. This is the biggest challenge for all of us in our lives.”