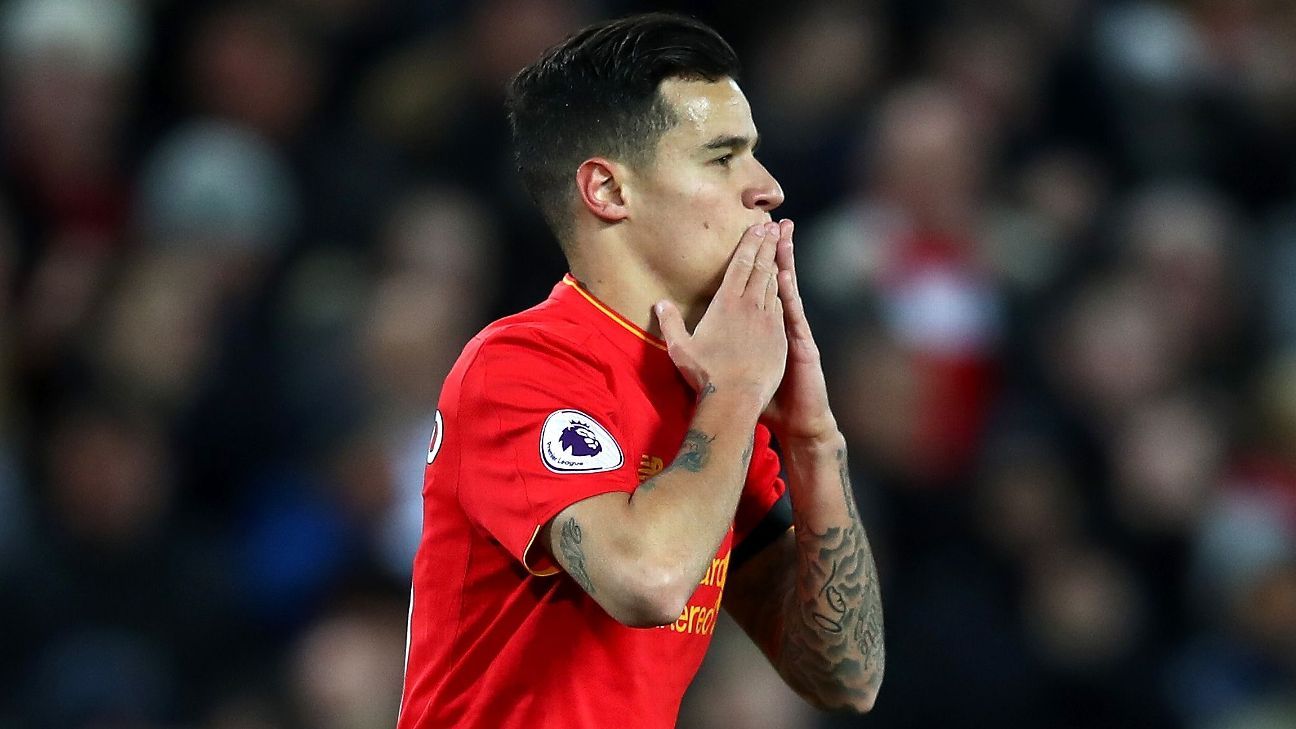 
HONG KONG — Jurgen Klopp has said Philippe Coutinho is not for sale after Liverpool rejected a £72 million approach from Barcelona.

Sources have told ESPN FC that Liverpool have informed Barcelona that their star forward will not be sold for any price.

Brazil international Coutinho signed a five-year contract at Anfield in January, with Liverpool ensuring that no release clause was inserted as part of the new deal.

The bid comes as Paris Saint-Germain are working on a world-record approach for Barcelona’s own Brazilian star, Neymar.

“But that’s not since this morning or yesterday, it’s not been any different. Phil is a very important player for us.

“He’s trying to get back his rhythm but there’s no doubt about his quality. He’s very smart both offensively and defensively.

“The nice news is that he’s still young. He has improved a lot since I’ve been here and he can still improve a lot.”

The Liverpool manager added: “I’m not surprised that any club is interested in players at Liverpool.

“The very important message is that we are not a selling club and that’s how it is.

“We have to create a situation where everybody is easily able to see which direction we want to go.

“It’s really positive. This is a fantastic club and it’s a good moment for Liverpool.”

Meanwhile, his teammate, Adam Lallana, urged the 25-year-old to stay at Liverpool for the foreseeable future, believing success can be achieved if the core of the team is kept intact.

“We’re going to achieve big things here and I’m sure Phil is going to be part of that,” Lallana told the same news conference.

“He’s in that elite bracket but there’s no reason why he can’t continue to be in that bracket and achieve huge things here at Liverpool Football Club.

“We’re a massive club. If we’re going to win competitions like the Champions League and Premier League then we need to keep our players like Philippe.”

Klopp and Lallana were speaking to the assembled media in Hong Kong ahead of Saturday’s Premier League Asia Trophy final against Leicester City.

Liverpool’s preseason tour has been somewhat disrupted by the torrential rain in Hong Kong over the past week, forcing the team to train indoors on multiple occasions.

The Reds boss admits that summer tours to exotic locations are far from ideal, but are necessary for clubs with a global reach in modern football.

“I think it makes sense to be absolutely 100 percent honest, no I don’t like to travel in the preseason,” he said. “Yes, I want to go somewhere with better conditions than Liverpool, but we have to and now we are here. It’s nice.

“It’s much better than I thought when I first came here. It was raining like I never saw before in my life. We trained in the most difficult circumstances and I loved it.

“In the preseason we want to create difficult situations. Here, the weather — first the rain and when the rain stops, the heat. But the players were outstandingly good, honestly. I was surprised by how good they used the circumstances.

“It’s a 14-hour flight [to Hong Kong] and it’s not what you would normally do. But big clubs, like Liverpool, have to do it.

“After the season we flew 24 hours to Australia [for a friendly]. It’s not that you think we have nothing else to do than this, but we were there and it was nice. We have to show up where our fans are. For this, we have to make compromises.

“Yes, it’s not perfect, but we really made the best of it.”

After returning home from Asia, Liverpool will travel to Germany for a training camp and three warm-up matches before concluding their preseason schedule in Dublin against Athletic Bilbao on Aug. 5.