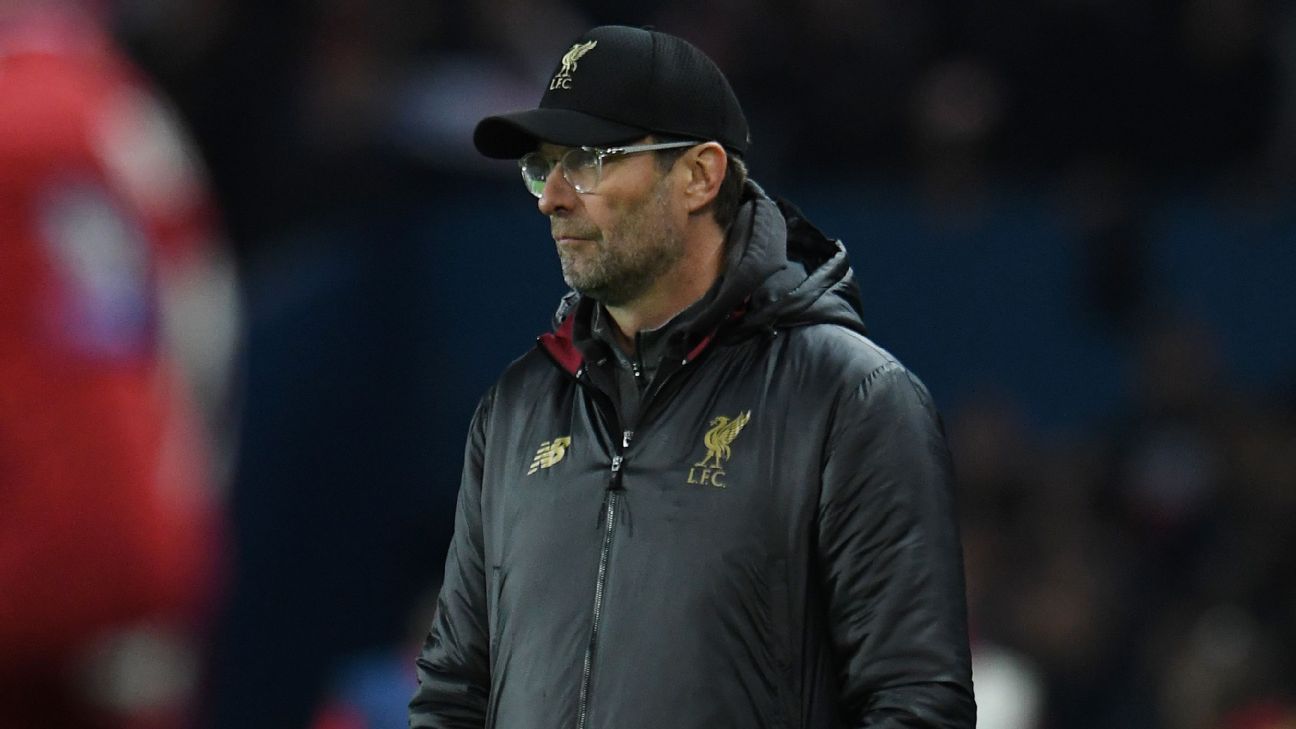 
LIVERPOOL, England — Jurgen Klopp has rejected suggestions that he has problems to solve in Liverpool’s midfield.

Liverpool’s three-man midfield of Georginio Wijnaldum, Jordan Henderson and James Milner came in for widespread criticism following the 2-1 defeat to Paris Saint-Germain in the Champions League on Wednesday night.

However, Klopp used Liverpool’s defensive record in the Premier League so far this season to defend the recent performances in the centre of the pitch.

“We have conceded five goals and you talk about our midfield being overrun?” Klopp said at a news conference on Friday to preview the Merseyside derby. “Sorry, I didn’t see that.

“Yes, we could have scored more goals and been more creative. But no, I don’t see any problems in midfield, to be honest.”

Henderson will miss Sunday’s encounter with Everton at Anfield through suspension after picking up a red card at Watford last weekend. Sixth-placed Everton make the short trip across Stanley Park with confidence as a result of their positive start under new boss Marco Silva.

“He has the best squad,” Klopp said. “They brought in players he wanted.

“Richarlison, what a player he is. Last year already [Theo] Walcott came in, this year Bernard came in, [Andre] Gomes, [Yerry] Mina. Since I am in, Everton was always really busy, but now it’s the best-tuned squad.

“One or two years ago [Wayne] Rooney came back, [Gylfi] Sigurdsson came, they said they could not play because of lack of speed. But everything is there. They have good organisation with [Seamus] Coleman back and fit, [Michael] Keane settled and fit, Mina is a brilliant player, very important in the build-up, and [Lucas] Digne is like a young [Leighton] Baines.

“And, of course, England’s No.1 in the goal, so that’s a really proper squad. It would be in all leagues in Europe a European team, I am sure. The development and improvement is obvious.”

Meanwhile, Klopp believes Sunday’s derby represents a good opportunity to put to bed the disappointment of midweek, which leaves Liverpool’s hopes of reaching the round of 16 in the Champions League in serious doubt.

Everton are winless in their last 17 Merseyside derbies, while Klopp has managed Liverpool in six of them, winning on four occasions.

“If you would have let us play a game immediately after the game on Wednesday, we would have played,” Klopp said. “And in the best case, against the same opponent again. “That was the overall feeling.

“We were not happy with what we did, or what they did. But you don’t keep that in for three or four days. We are used to that. We do not need an extra portion of motivation because of Paris and what happened on the pitch.

“The moment you sign a contract for Liverpool, you know that you understand 100 percent the responsibility for these games. Nobody has to tell you players want to be a part of these derbies before they join the club. That’s what we want to use, and of course the crowd at Anfield.

“It’s 4:15 p.m. kick-off, it will be nearly dark, no, it’ll be dark already? Yeah, perfect. Everything we need, so let’s go out and fight for each other. They were different games in the past, it was clear that Everton would be very passive, that is not the case now.

Real Madrid’s Marco Asensio gets 9/10 for hat trick in thrashing of Mallorca
Salah, Mane 8/10 as they fire Liverpool to victory against Crystal Palace
Kane needs to remind Tottenham of his brilliance when they face Chelsea
Barcelona, PSG to battle for Paul Pogba, Franck Kessie in midfielder search
Chelsea benefit from Thomas Tuchel’s tactical tweak to display Premier League title credentials