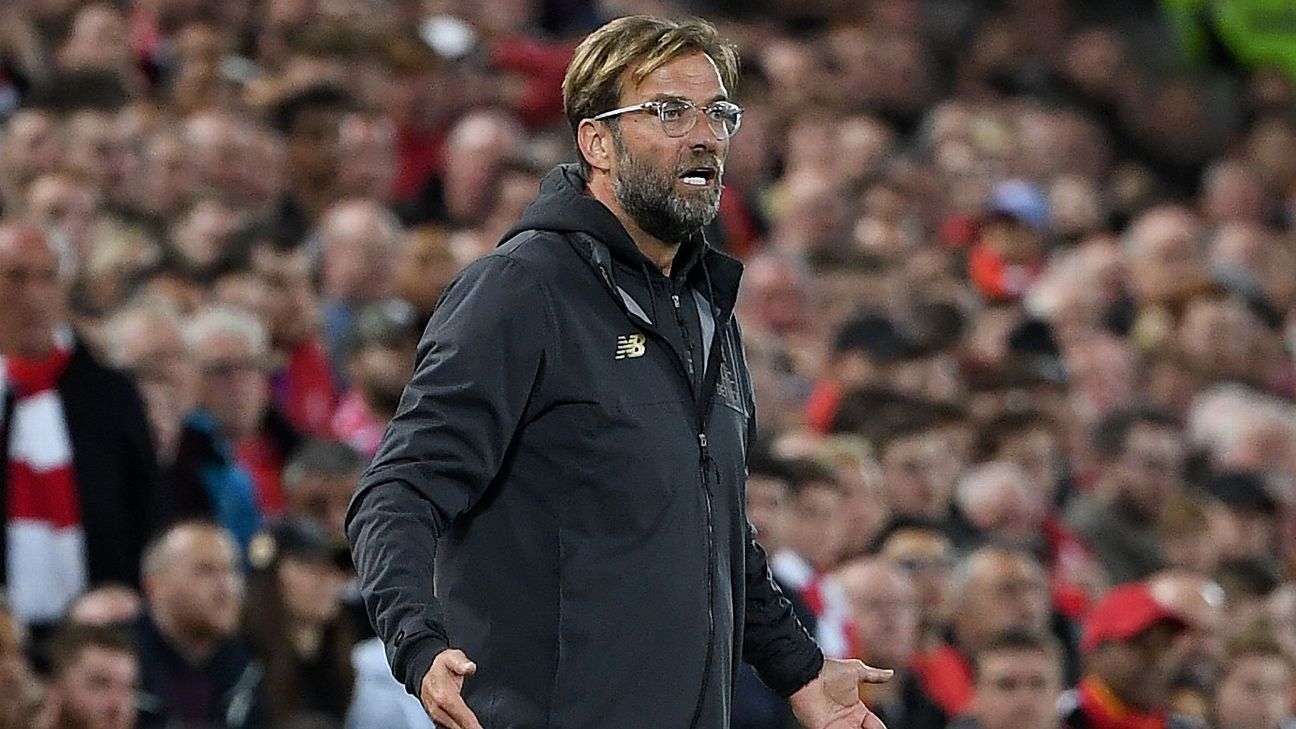 
LIVERPOOL, England — Jurgen Klopp has questioned the usage of the video assistant referee in allowing Chelsea’s equalising goal to stand during Liverpool’s 2-1 defeat in the Carabao Cup on Wednesday night.

Eden Hazard came off the substitutes’ bench at Anfield in the second half and scored a wonderful solo effort five minutes from time to eliminate Liverpool at the third-round stage of the competition.

After Daniel Sturridge had given Liverpool the lead, Emerson pounced on a rebound off a free kick to equalise for the visitors, but had to wait for the goal to be confirmed by VAR.

Klopp felt the awarding of the free kick in the buildup — when Naby Keita was adjudged to have fouled Victor Moses — was particularly harsh, adding that he believed Alvaro Morata and Ross Barkley were in offside positions from the resulting set-piece.

“Both discussable,” he said at his postmatch news conference. “I don’t think it’s a foul. He plays the ball and then he touched afterwards, but things like that happen.

“We constantly touch each other with feet, with arms and stuff like that. Not all of that is a foul. It’s a clear ball and the linesman wanted to give a throw-in. That’s it’s a foul and then a yellow card is always strange.

“And then the situation, I didn’t see it in the game, of course, but when they started using the VAR I knew it was close, obviously. It was close, it was really close. I don’t think I have the Liverpool glasses on my nose, I would say it’s offside. That’s then how it is.

“You have two players that are clearly offside and they block. Not to forget, they don’t touch the ball. They block players, my players. That means a big impact in the situation.

“Then the other one, Barkley makes the header and, for me, is offside as well — not much. But I don’t expect that the ref would see that.

“Then you have the VAR and then you have a look and it’s close. Why do you use it if you don’t want to make the decision then? That’s all. It was clear.

“I don’t feel bad, it was only unlucky. You have a free kick that was maybe no free kick. I think in a lot of situations nobody whistles it.

“And the other one, maybe in the future when you use VAR then you say: ‘OK, that’s offside’. I don’t expect using in situations like this, the VAR, to be honest. But if you use it, make a decision.”

The defeat put an end to Liverpool’s seven-match winning run as they prepare for Saturday’s trip to Stamford Bridge in the Premier League.

Both managers made eight changes for the tie, with Liverpool’s Fabinho, Alberto Moreno, Simon Mignolet, Nathaniel Clyne and Dejan Lovren all receiving their first starts of the season.

“It was a difficult game for both sides,” Klopp continued. “They have a specific style of play, that’s cool and you need to get used to it.

“Minute by minute we got more used to it, even in the start when we left too many spaces open and stuff like that, when they could play between the lines, we already had bigger chances.

“They were not really a big threat, I would say. More and more we got used to it. The first half was good and the second half started well.

“We scored the goal and could have scored before. We played much calmer football, which is another thing we could have done in the first half already because against such a dominant side like Chelsea, in the moments when you have the ball then you need to dominate them.

“Otherwise you give them the ball and they start again with all the trouble. You have to get that.

“We had five players on the pitch with their first start of the whole season, so I’m really happy that they had the game because now they are really back. It’s always a bit like this; they don’t start and after three or four weeks you think: ‘OK, now they don’t have rhythm.’

“They don’t have rhythm but in the game they got the rhythm and in the moment when we learned enough from the game we controlled it much better.”