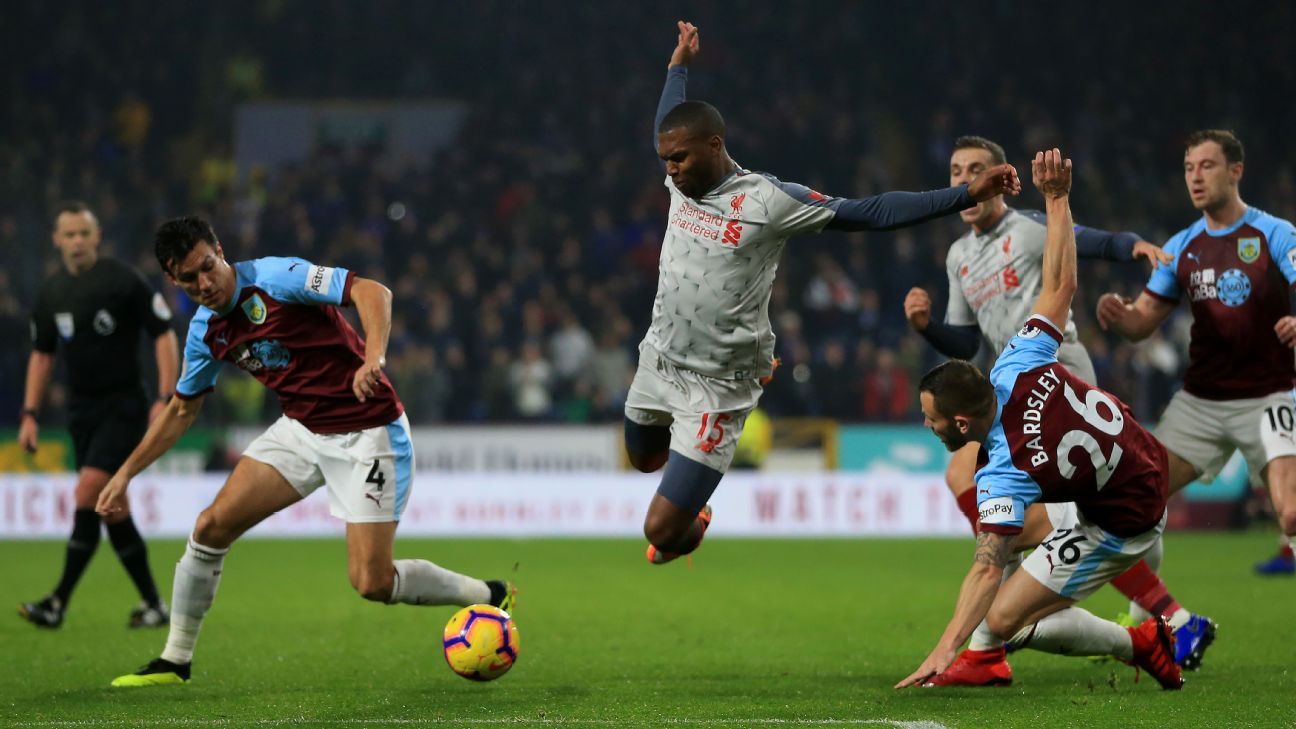 
LIVERPOOL, England — Jurgen Klopp has said he believes Sean Dyche was trying to divert attention from Burnley’s tough tackling when he claimed Daniel Sturridge had cheated during Liverpool’s midweek win at Turf Moor.

Liverpool’s Joe Gomez will be sidelined for around six weeks after suffering a fracture to his lower left leg in a challenge from Ben Mee — one of a number of slide tackles that left Klopp unhappy.

Dyche defended the physicality of his team  and questioned why his counterpart had failed to mention an alleged dive from Sturridge.

“Daniel Sturridge is no cheat,” Klopp told a news conference on Friday. “I think what Sean tried to do there is to bring up another subject so somebody could speak about that.

“I’m not sure if he spoke about the challenge of [Phil] Bardsley on Alberto Moreno. What do we talk about? We all have our own interests and aims. What can I say?

“After that game, they are talking about one situation where a player goes down without contact. I don’t know if the referee even judged it.

“It was a normal situation which can happen — sometimes a striker expects a tackle and tries to avoid it by jumping.

“I can’t avoid it if people want to discuss Daniel, but on the other side I said what I had to say about that after the game and different opinions are allowed, obviously.”

Liverpool estimate that Gomez will miss around six weeks depending on how he responds to rehabilitation. The England international has been in fine form this season, operating as a central defender or right-back.

“It’s a shame for the boy,” Klopp said. “For us, he was in outstanding shape and helped us a lot, especially because we could make these changes with Trent [Alexander-Arnold] and Joe.

“Joe improved so much with Virgil [van Dijk], and it was nice to see he did exactly what everyone in the scouting department expected him to do.

“When I came in everyone was full of praise for him, but I didn’t see him training because he was injured for the under-21s. Now this injury.

“But I would say it was a bit of luck because it could have been worse. Six weeks for us is massive, I can’t even count the games we have in that period. But that means he will be back for a big part of the season and that’s good.

“At the moment he is not too well because it is still painful, but when that has settled we can start with the rehab and go in the right direction.”

Meanwhile, Sadio Mane is unlikely to play any part in Liverpool’s game at Bournemouth on Saturday after missing the Burnley trip with a foot injury.

Andrew Robertson and Georginio Wijnaldum are expected to be available again, but Dejan Lovren is out with a concussion.

“Sadio is now out [at Melwood] and tries to run [for the] first time,” Klopp said. “That doesn’t sound like he will be ready for tomorrow. Gini is nothing — he did his own programme [this week] and is fine.

“Robbo played pretty much most of the games in a very intense position. That’s why we decided to give him eight hours off. That was actually the only thing, he was not in Burnley.

“Lovren got a knock last week and got a concussion. He is still not able to play.”