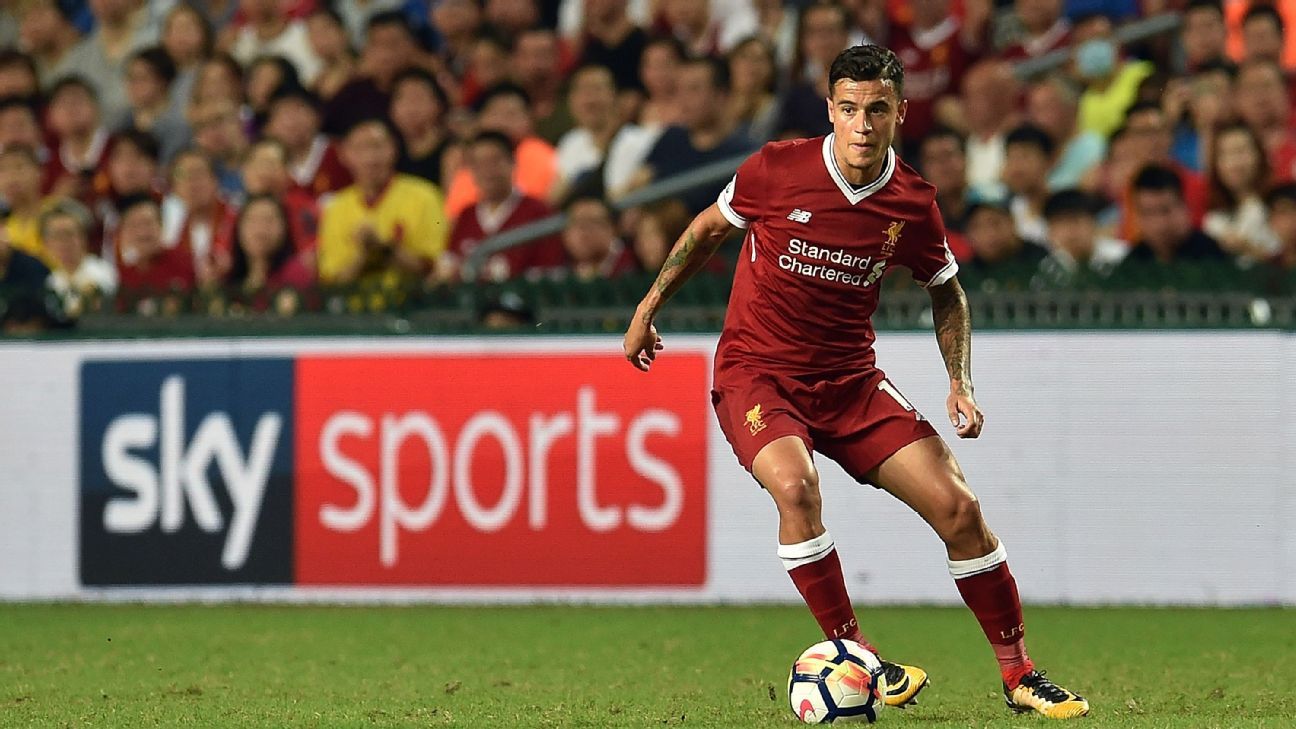 
LIVERPOOL — Jurgen Klopp has said he would welcome Philippe Coutinho back into the Liverpool squad despite the Brazilian’s attempts to force a move to Barcelona.

Liverpool have rejected three offers from Catalan side for Coutinho, who handed in a transfer request and has not featured in the Reds’ first three matches of the season.

Klopp insists there are no issues between himself and Coutinho, but added that he is unsure when the player would return to the fold, having now picked up an illness.

The Liverpool manager was asked at a news conference whether everything was OK between the manager and the player and replied: “Of course.”

In a follow-up question, he was then quizzed on whether Coutinho would be welcomed back into his plans.

“Yes. Absolutely. 100 percent.” Klopp replied. “If Phil would start tomorrow, which he can’t because on top [of the back injury] he’s now ill, it would take time because he’s had no training for a long time.

“[I have] no idea in this moment [when he’s back]. We would have to check in the moment when he is back.

“It’s 100 percent clear that nothing has changed. I said it already — my English is not good enough to give 500 different answers to the same question.”

Klopp was speaking to media at Anfield on Tuesday night ahead of Liverpool’s Champions League playoff second leg with Hoffenheim.

Holding a 2-1 advantage from the away leg, Liverpool are well placed to reach the group stages of Europe’s premier club competition for only the third time in the last nine seasons.

When asked what he was expecting on Wednesday night, Klopp answered: “A football game.”

He then added: “I think the main difference between this game tomorrow and the game last week is now everybody knows about the quality of Hoffenheim.

“I knew it before, but I’m pretty sure that a lot of people didn’t expect the quality of Hoffenheim.

“It’s half-time and at half-time you have to adjust things. You have to change things in the right direction. The first game was enough to get the result. The second game needs to be better than this.

“Anfield is a main factor. We all know it. It’s a very special place. Nothing happens by itself, we have to perform and deliver. We all know the atmosphere can — and will — help you. I really hope that everybody is ready to fight.”

Meanwhile, Hoffenheim head coach Julian Nagelsmann says he and his players will not be in “awe” of Liverpool or Anfield come Wednesday evening.

“Of course, a lot of history comes with this place,” the 30-year-old told his prematch news conference. “Some very big matches have been played here. I hope tomorrow that we can play a very big match.

“I think excitement is really what is really predominant in me now. I’m not in awe overly over this club.

“Of course, we are good enough not to hide here. We know this is a big name, this is an excellent team with a lot of history.”

For Hoffenheim’s Benjamin Huber, the second leg represents his first ever away match in Europe.

The 28-year-old defender reveals confidence is high in the Hoffenheim camp that they can cause an upset despite the defeat in Germany last week.

“It is difficult with the result from the first match, but that means we want to win even more now,” he said.

“This is a big game. We are looking forward to taking on this opportunity. Yes, the first leg wasn’t good but it shows that we are capable of winning.”

On Anfield, he added: “In terms of my career, this is my first international away match, so that’s a big thing.