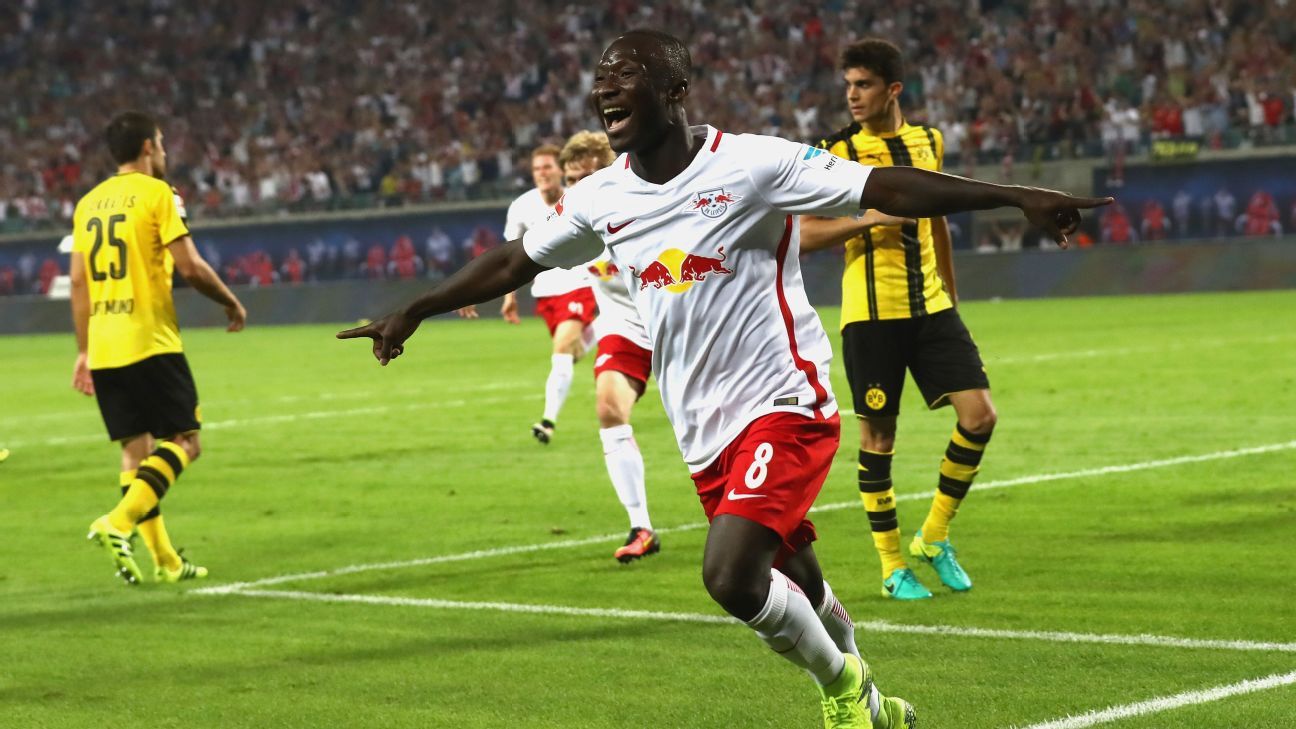 
RB Leipzig’s Naby Keita has been one of the best players in Bundesliga since arriving last summer and has certainly the best signing from his side’s former partner club, Red Bull Salzburg. But, only one year on from his move to Germany from Austria, the Guinea midfielder could already be on his way out.

Leipzig have reportedly handed him an €80 million price tag and Keita, wanted by Liverpool, is said to be open to a transfer according to ESPN FC’s Raphael Honigstein. Here are five things you need to know about the box-to-box midfielder.

He developed by playing street football

Born in 1995, Keita spent his youth playing football on the streets of Guinea’s capital Conakry. “To learn football in Guinea the street is the best school,” he told kicker earlier this year. “I believe that all boys in Africa, at least in Guinea, play on the streets and learn it there. You play football between all the cars.”

Keita, playing football with everything that was round, knew soon enough that the game was his way out of poverty. “My parents had nothing, and they put all hope on me,” he said. “Whenever I played well, I received some cash which I could pass on to my family. Folks told me soon enough I was really talented, and it goaded me into working even harder.”

His talent was soon noticed and in 2013 he made the move to France’s second division where he joined Istres following trials at Lorient and Le Mans. As the club were relegated, he moved on to Austria where then-Red Bull Salzburg chief Ralf Rangnick treated him like a son.

He turned down Arsenal for Leipzig

His progress at Red Bull Salzburg did not go unnoticed. Following two excellent seasons with the Austrian club, Keita was already on the radar of several Premier League sides. But he opted to remain within the familiar structures of Red Bull, following Rangnick, now solely in charge of Leipzig, to Germany.

Keita opted to take one step at a time instead of finding himself on the bench in England. Arsene Wenger even tried to convince him to join on the phone, but after 17 goals in 59 league matches for Salzburg he moved to Leipzig, “an exciting club with great potential.”

Though in the summer of 2016, he hinted that the up-and-coming German club were only a stopover in his career. “I do hope that in two, three years I will be on a level to be able to play for one of the big clubs,” he said.

Keita is tailor-made for a high-pressing side. He loves tackling, interceptions and is relentless in his efforts to win back the ball no matter where he is on the pitch. He runs at opponents, steals the ball and, once in possession, knows how to play the right pass.

According to WhoScored, during his season at Leipzig he played 1.3 key passes per match, with 81.8 percent of his average of 45.9 passes per match reaching a teammate. However, he has not been limited to passing only as he seeks one-on-one situations to open space for his teammates. His rate of 2.7 dribbles per match was only bettered by Dortmund youngster Ousmane Dembele last season.

Keita has mostly been deployed in a holding position by Leipzig coach Ralph Hasenhuttl, but has also featured in central attacking midfield. He linked up particularly well with attacker Timo Werner, for whom he set up five goals, only beaten in Bundesliga by the Dembele/Pierre-Emerick Aubameyang partnership at Dortmund and the Emil Forsberg/Werner partnership at his own club.

He is a box-to-box player with an elegance on the ball, and can start and finish moves.

He kickstarted the Leipzig revolution

Having moved to newly-promoted Leipzig in June 2016, Keita did not feature in the club’s first ever Bundesliga match at Hoffenheim — a 2-2 draw sealed by Marcel Sabitzer’s late equaliser for the visitors. He was instead introduced to Germany’s biggest stage on matchday two as an 84th-minute substitute with the game against Borussia Dortmund locked at 0-0.

It took him only five minutes to open his account when he hammered a ball under BVB’s crossbar from short distance. The hosts’ 1-0 win was a huge upset at the time and sent Keita’s team on a roll. They even led the Bundesliga for a brief spell in 2016 and Keita’s goal was the start of it all. The midfielder went on to score a total of eight goals and record a further eight assists in his maiden season.

He wants to become as successful as Lionel Messi

The 22-year-old has not sketched out a plan for his club career. He has made his love for Barcelona public and he has been linked with Bayern Munich, Arsenal, Southampton, Manchester City and Liverpool. But he at least wants to emulate Borussia Dortmund attacker Aubameyang by being named the best African footballer.

But his dreams don’t end there. Earlier this year, he stated in kicker that while he might not yet be a big name he will not rest until he gets near Lionel Messi’s achievements. “I want to continue to grow, and would love to have similar success one day,” he said.

Given his €80m price tag, he at least is getting closer to achieving his goals. This summer could see him enter a head-to-head race with Aubameyang to become the African player with the highest transfer fee ever.