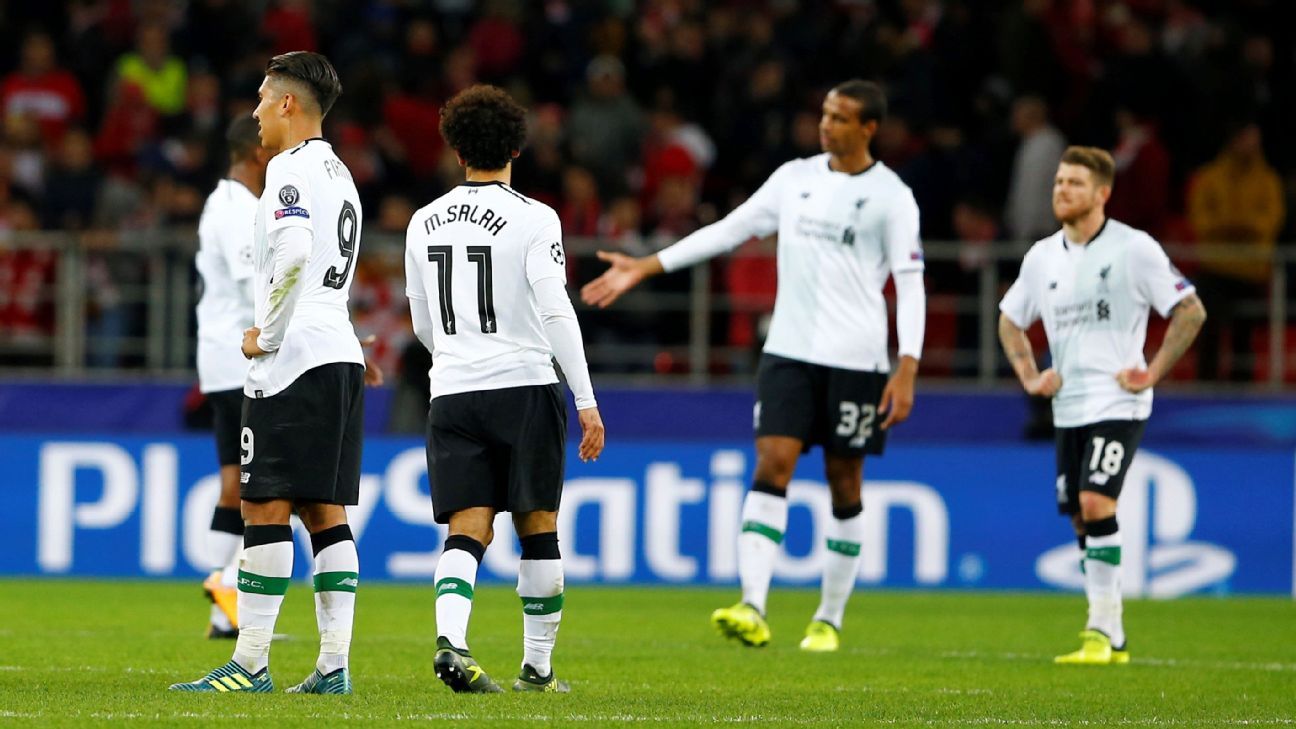 
A run of just one win in six games has left some Liverpool supporters feeling frustrated and edgy, but they should probably resist pressing the panic button just yet. The results haven’t been favourable of late but based on performances, the Reds look close to being very good.

Yes, they should have beaten Spartak Moscow on Tuesday night but there was very little wrong with their overall performance and Jurgen Klopp will no doubt be emphasising that to his squad. Despite some indifferent results, the players must not let doubt creep in because the biggest danger to Liverpool remains themselves. If they maintain belief and confidence in what they’re doing, the rewards will surely come.

Having thrown away two points in the opening Champions League fixture against Sevilla, failure to beat Spartak leaves the Reds on just two points when it really ought to be six. That’s the bad news. The good news is that these results ultimately shouldn’t make any difference when it comes to qualifying for the knockout stages of the competition. Far better for Liverpool to be held to a draw in Moscow than last weekend at Leicester, for example.

The damage from Tuesday night’s draw is likely to be minimal. With two teams qualifying from each group and Spartak already having been held to a draw by Maribor, the weakest team in Group E, Liverpool need only beat the Slovenian side home and away, and then take care of business against Spartak at Anfield, to have enough points to see them through. Whether they finish first or second in the group isn’t overly important. Topping the group increases the odds of smoother passage through the knockout stages, but it still doesn’t guarantee an easy draw. The main thing is getting out of the group, which Liverpool should still do without too much difficulty despite their profligacy in the opening two games.

Liverpool played well in Moscow and their form in general should not provide too much cause for concern. Klopp seems relaxed about it even if many fans aren’t. The results aren’t what they should be but if they continue to play as they are then the wins come, particularly now they have most of their best players available again. The Merseysiders dominated Spartak from start to finish, created a host of gilt-edged opportunities and on another night, they’d have scored enough goals to win three games, let alone one. It can go like that sometimes.

Even the much-maligned defence played well and restricted the home side to just two efforts on goal. Of course one of them went in, which seems to be the norm these days. It’s not easy creating chances against Liverpool but fortunately for opponents two or three is usually all it takes, particularly when Loris Karius is between the sticks. Please, enough with that now, Jurgen.

As you can see above, Liverpool are currently a side that requires a lot of opportunities to score but who need to give up very few for them to concede. It’s partly their own doing but there’s also an argument to be made that what is happening at the moment is something of a statistical anomaly and that better times are surely around the corner, particularly if the performance in Moscow proves to be the norm.

Tuesday night was the first real opportunity supporters had to see Liverpool’s best attackers all on the pitch together from the start. They only managed one goal but time and again they carved open the Russian side’s defence and with sharper finishing, it would have been a rout. Philippe Coutinho is playing with a swagger again, Sadio Mane has gone up a level this season and is now close to becoming world-class, while Mohamed Salah (despite his occasional wastefulness in front of goal) has six goals already and will only get better.

While Coutinho has come into some fine form, fellow Brazil international Roberto Firmino has gone off the boil. He was poor at Leicester last weekend and very wasteful in Moscow. Daniel Sturridge might now be in line for a start this weekend, though he too was disappointing in front of goal against Spartak.

Somebody soon will be on the receiving end of a mauling by the Reds. There will be a game where they convert most of their chances and they will hit some unsuspecting opponent for six, seven or maybe even eight goals. The concern is that on the days when the forwards are not taking their chances, it often proves costly because of their inability to keep clean sheets.

Unless that changes quickly, it will probably prevent Klopp’s team from seriously challenging for the title, but if they continue playing as they are then results should start to pick up and they should still feel confident of at least equalling what they did last year and perhaps even surpassing it.