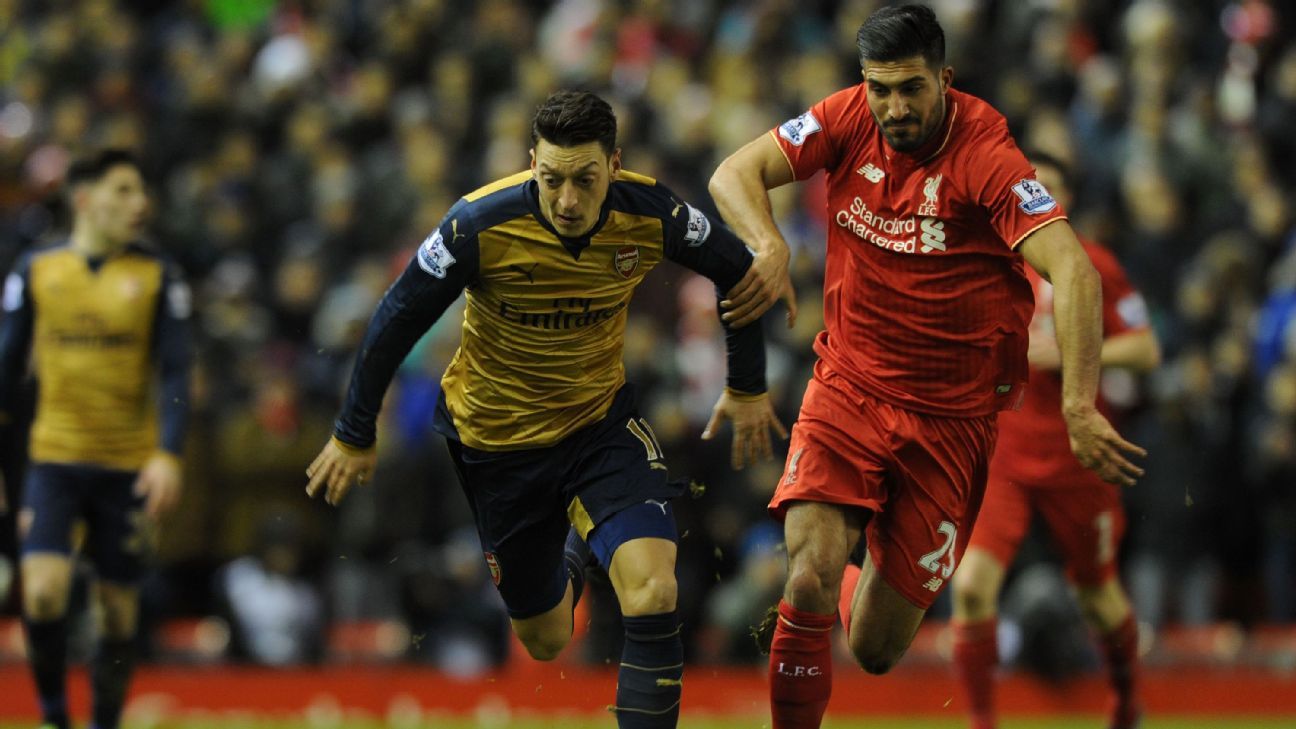 
Few fixtures over the past four years have been as entertaining as Liverpool-Arsenal: Their eight matches in that time have averaged 3.8 goals, a run that includes a 0-0 draw at the Emirates. And even that stalemate was fast-paced, frenetic and thoroughly entertaining.

Their fixture slated for Sunday seems to be a genuinely big game. It appears doubtful that both sides will finish in the top four given the competition from Manchester United, Manchester City, Chelsea and Tottenham. Three games into the campaign, it’s hardly decisive, but a loss could be a psychological blow to the defeated side.

Expect an attacking approach from both, and plenty of goals, even though these sides play in a very different manner. Arguably, it’s a test between the approaches of two Germans: Liverpool manager Jurgen Klopp and Arsenal’s chief creator, midfielder Mesut Ozil.

Klopp’s Liverpool side have started this campaign without Adam Lallana, who is injured, and Philippe Coutinho, who is “injured.” In theory, the double absence is a major issue as it robs Liverpool of their two most creative footballers, but Klopp has discovered that Liverpool attack perfectly well without them.

There were no problems (going forward, at least) in the 3-3 draw with Watford on the opening day of the Premier League campaign, or in the two-legged victory over Hoffenheim, when Liverpool smashed in six goals over two games, including four at Anfield on Wednesday. Liverpool’s 1-0 victory over Crystal Palace last weekend was less promising in an attacking sense, with Sadio Mane providing the difference via a close-range strike. Against teams determined to attack, however, Liverpool’s playmaker-less system should work perfectly well.

Without Coutinho and Lallana, Liverpool are more dependent on the counterattack. This requires teams to come at them, of course, but this was little problem against Hoffenheim at Anfield. With the German side trailing from the first leg and needing to force the issue, they used a high defensive line and left plenty of gaps in which Liverpool could counterattack. Mane repeatedly ran in behind the defence from the left, while Mohamed Salah was a threat down the right. Some of Liverpool’s flowing counterattacks were beautiful, almost reminiscent of Invincible-era Arsenal. This weekend, Klopp will be hoping Liverpool play in a similar manner against that very opponent.

In truth, even if Coutinho and Lallana were fit, Klopp would have used Salah and Mane on the flanks anyway. Lallana has always fit into midfield better than attack; Coutinho was increasingly used in midfield toward the end of last season. If anything, the midfield trio has changed in their absence. In Jordan Henderson, Emre Can and Georginio Wijnaldum, that trio is now comprised of three aggressive, physical, up-and-down players well-suited to both counterattacking and counter-pressing football.

Wijnaldum provided plenty of midfield runs last season, often popping up with important goals at Anfield, but Wednesday night’s victory shows that Can has been handed considerably more freedom in this system, effectively serving as an attacking midfielder. He scored two goals against Hoffenheim and curled another effort just wide of the far post, surely the closest the German international will ever come to a hat trick.

Playing alongside two disciplined midfielders has allowed Henderson to scamper forward more. Playing at the base of the three-man midfield, his duties are predominantly defensive when Lallana or Coutinho are part of that trio, and would surely have been almost solely defensive if Klopp had fielded both in that zone. With Wijnaldum and Can, however, Henderson brings more of his old-school box-to-box qualities: he pushed up aggressively to dispossess Hoffenheim’s Kevin Vogt in midweek, deep in the opposition half, before running through on goal and squaring with marvelous selflessness for Roberto Firmino to convert.

The focus upon mobility, pressing and ball-winning might be particularly notable this weekend. Four seasons ago, Liverpool destroyed Arsenal 5-1 with one of the most effective displays of midfield pressing and quick counterattacking the Premier League has ever witnessed. Much has changed since then — Brendan Rodgers was Liverpool’s manager, for a start — but that contest was particularly memorable for the manner in which Ozil simply couldn’t live with Liverpool’s press. For two of Liverpool’s goals that day, Ozil was left standing motionless as Liverpool shut him down quickly, turned over possession and broke ruthlessly.

Ozil was criticised heavily after Arsenal’s 1-0 loss to Stoke City last weekend, particularly for his lack of work rate without possession. That’s become a familiar and slightly tiresome criticism of Ozil; it was also a surprising theme of last weekend’s defeat considering Arsenal weren’t exactly struggling because of their lack of pressing.

This weekend, the criticism might be justifiable. If Ozil remains his usual nonchalant, borderline disinterested self, and that’s juxtaposed with Liverpool’s 10 outfielders all working hard, pressing and dispossessing determinedly in an Arsenal defeat, more reasonable questions will be asked about whether Ozil deserves to be excused from defending. But the answer is not for Ozil to suddenly change his game and, say, relentlessly sprint after opponents for the sake of it: the answer is for him to justify his freedom with outstanding attacking contributions.

Indeed, with Liverpool lacking Lallana and Coutinho, Ozil will effectively be the only footballer in his mould on the pitch. It’s a golden opportunity for him to underline the importance of a provider.

One wonders what Klopp would make of Ozil. He described the German international as “technically perfect” when his Dortmund side faced Arsenal four years ago, and there’s little doubt Klopp would find a place for Ozil in Liverpool’s side. But Ozil’s tendency to switch off when possession is lost would surely infuriate the manager; in a sense, the fact that he is considered “technically perfect,” while clearly not being a perfect player, hints at his limitations.

Those limitations might be particularly obvious on Sunday. This game is a strategic clash: 11 Liverpool men working tirelessly against an Arsenal side that allow their playmaker freedom from defensive responsibilities in order to focus upon creating. All postmatch analysis will likely focus upon this particular aspect of the contest.