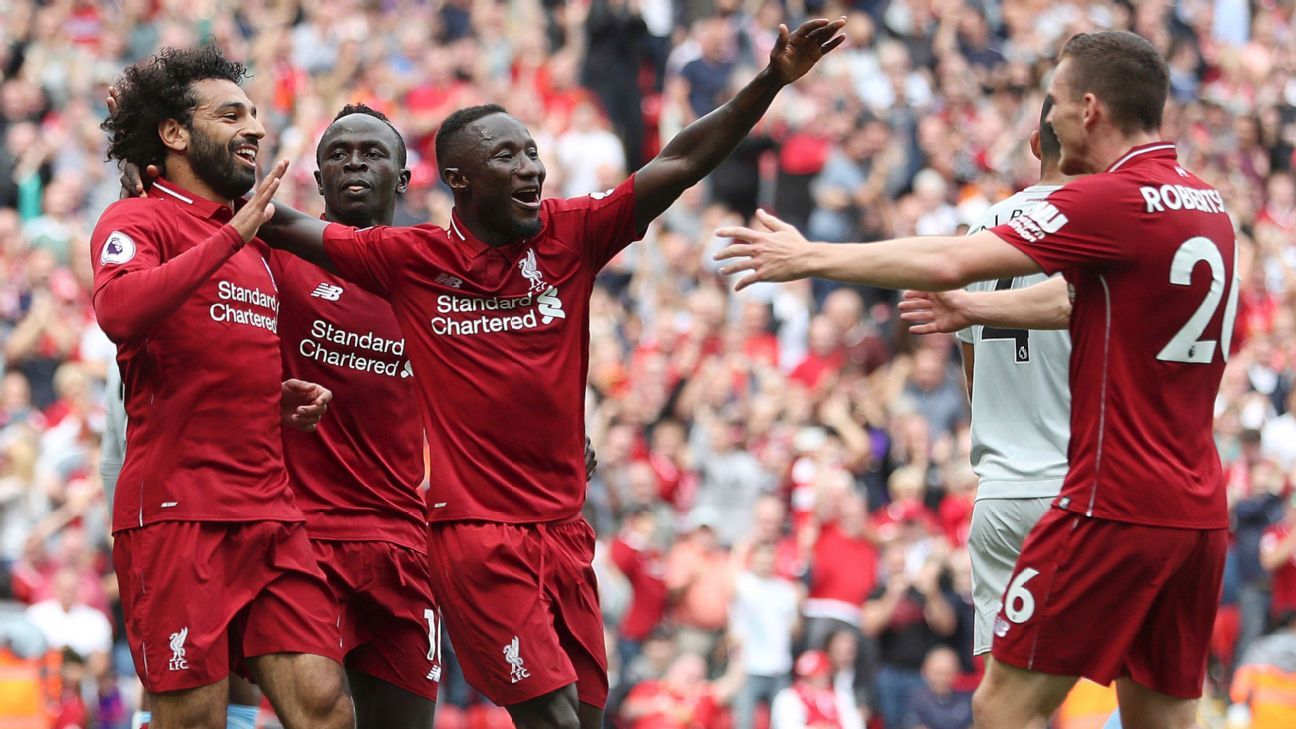 
LIVERPOOL, England — Three quick thoughts from Liverpool’s 4-0 win over West Ham in their opening match of the 2018-19 Premier League season at Anfield.

Liverpool started a hugely promising season as they mean to go on. Expectations on Merseyside are as high as they’ve ever been — and rightly so based on this compelling display.

Golden Boot holder Mohamed Salah appears to have picked up where he left off as he scored the opening goal before Sadio Mane then netted twice. Late substitute Daniel Sturridge scored with his first touch to put Liverpool top of the table.

In the buildup to the opener, Jurgen Klopp said Liverpool would have to be Rocky Balboa this season. In the campaign’s first round, his team were sharp, powerful and forever fighting for more against Manuel Pellegrini’s men.

Liverpool fans arrived on Sunday hoping to see the start of a ride that will ultimately end with the club lifting its first ever Premier League title.

There were competitive debuts for big-money signings Naby Keita and Alisson. Klopp could also call upon a strong bench, featuring Xherdan Shaqiri, Adam Lallana and Sturridge, for the first time in a very long time.

Such reasons are why Liverpool are tipped at being Manchester City’s closest competitors.

Another, perhaps most pertinent, is that they boast the player who has scored the most goals in a single Premier League campaign. And it only took him 19 minutes to open this season’s account.

Salah will score better and more difficult ones in the coming months, but he was perfectly placed at the back post to tap in Andrew Robertson’s cross and put Liverpool 1-0 up.

In first-half injury time, another one of Liverpool’s weapons made it 2-0. Again only from a few yards out, Mane converted James Milner’s pull-back.

There was simply no let-up from Klopp’s side after half-time. Firmino picked out his forward partner Mane, who was offside but turned and finished to put West Ham down for the count.

Liverpool took no pity on their on their opponent, with Sturridge converting from a corner in the 88th minute to put Liverpool ahead of Chelsea in the table on goal difference.

Liverpool are off to a flying start, but this is a battle that will go the distance.

2. Keita proves to be perfect fit for Liverpool

It’s only early days, but it would appear Keita is going to be a devastating extension of Liverpool’s front three this season. It’s a task Alex Oxlade-Chamberlain performed well in the second half of last, and his expected loss for 2018-19 means Keita had to hit the ground running — and he has.

There were countless of examples of the dynamic midfielder joining Salah, Mane and Firmino in the opponent’s penalty area. But it was his ability to feed the trio that stood out. He was crucial for the opening goal.

Between the lines, Keita picked up possession from Trent Alexander-Arnold before driving towards the West Ham back four. In doing so, most of Anfield thought he had held onto the ball for too long. That was until he laid it off for Robertson to deliver the accurate assist.

When Firmino was taken off in the 69th minute, Keita finished finished the game as the left forward.

Liverpool supporters had to wait 12 months for him to arrive. He could very well be worth it. There is a reason why Barcelona attempted to hijack Liverpool’s pursuit last summer, but it’s also becoming abundantly clear why Keita chose Klopp and Liverpool. He fits perfectly in this current setup.

The Hammers have attempted to move on from a 2017-18 season that involved flirting with relegation, a managerial sacking and on-the-pitch protests from supporters with a summer of strong intentions. It won’t be a quick fix, however. A squad rebuild means they will be a work in progress in the opening months.

Despite spending upwards of £100 million, arguably West Ham’s most high-profile incoming arrived for nothing.

Jack Wilshere, who left Arsenal upon expiration of his contract, remains an enigma of the Premier League. Will his numerous injuries throughout the years mean he’ll never been as good as some predicted when he was a teenager?

Now at West Ham, the 26-year-old is attempting to reduce his number of injuries by altering his approach. No longer wanting to go gung-ho in every tackle, Wilshere wants to be smarter in challenges, contesting ones he’s more likely to emerge with the ball.

This “new” Wilshere, though, was entirely passive against Liverpool. He began in a No. 10 role before being pushed further back after half-time. Wilshere’s difficult afternoon was compounded when Alexander-Arnold’s drilled free kick struck him in a rather delicate area.

He was not the only West Ham new boy that struggled.

Club-record signing Felipe Anderson was particularly quiet on both flanks. But as part of the entrenched 4-2-3-1, the Brazilian’s task on Sunday involved tracking the pacy full-backs far more than supporting Marko Arnautovic in attack. He was hooked in the 62nd minute.

With Bournemouth heading to the London Stadium next weekend, it should be easier for the two to make a notable impression.