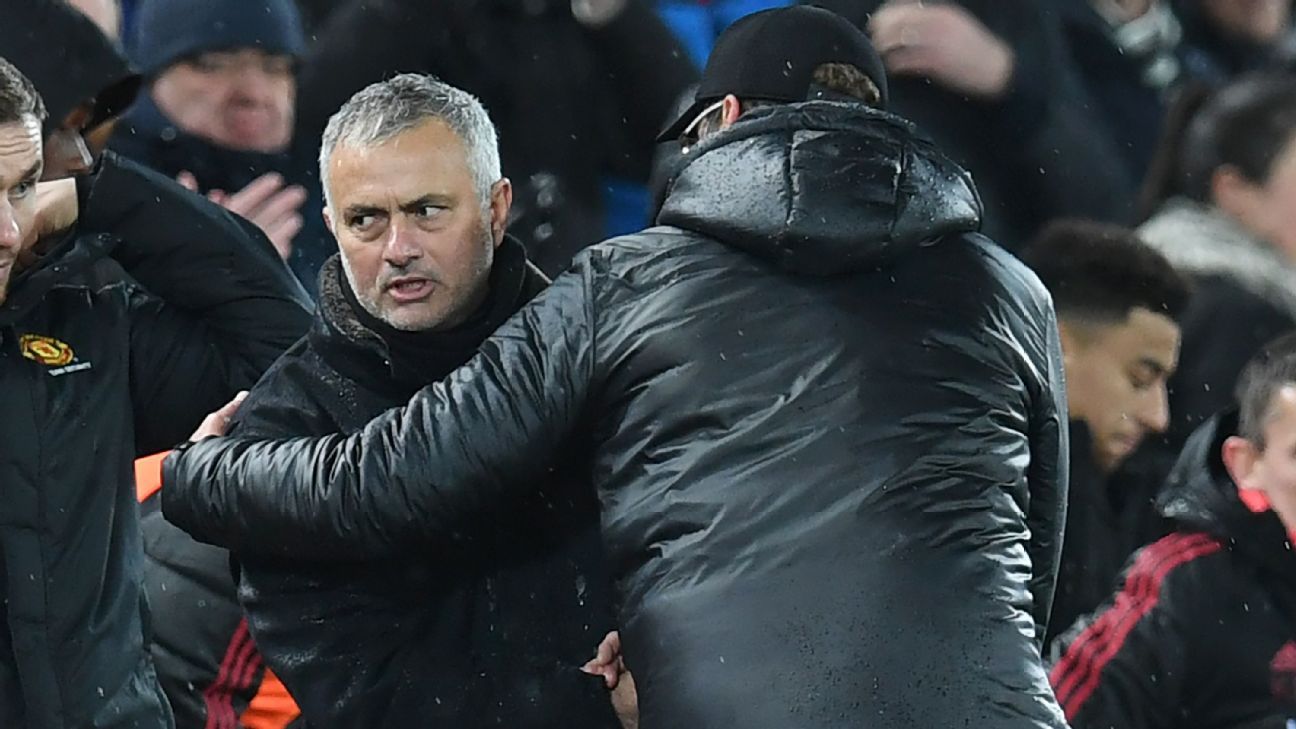 
LIVERPOOL, England — When a manager becomes the subject of ridicule, it rarely ends well, no matter who he is, so only time will tell how damaging it was for Jose Mourinho to hear Liverpool fans chanting “Don’t sack Mourinho!” in the final minutes of their team’s 3-1 win vs. Manchester United at Anfield.

It was reminiscent of Arsenal opponents serenading Arsene Wenger with “we want you to stay” songs during his latter years in charge and the buoyant Liverpool supporters were mocking not only because their team was better in every department, but also because they simply could not believe how bad United have become.

Moments earlier, TV cameras had focused on United’s executive vice chairman Ed Woodward — a gloved hand covering his mouth — chatting to club legend Sir Bobby Charlton. Who knows what Woodward was saying? While we can be pretty sure he wasn’t expressing delight at what he was watching, it would be a leap of faith to suggest he was saying that Mourinho’s time was up.

Woodward is not the man who will rule on Mourinho’s fate, although he would be responsible for breaking the news, if or when the end comes. The ultimate decision lies with the club’s owners, the Florida-based Glazer family, and specifically co-chairman Joel Glazer, who speaks to Woodward on a daily basis about events at Old Trafford, on and off the pitch.

Away from the actual football, the United juggernaut rolls on, generating huge income. However, after losing at Anfield, the team is 19 points behind Liverpool, which is as big as has existed at this stage of the season for 46 years, and 11 points adrift of the top four. After 17 Premier League games, 29 goals have been conceded, one more than in the whole of the 2017-18 campaign.

What is more, the club’s most recognisable player, for whom a then-world record £89 million was paid to Juventus in August 2016, cannot even get in the starting lineup because Mourinho does not believe he can do a better job than Nemanja Matic, Ander Herrera or Jesse Lingard.

For the third league game in succession, Paul Pogba started on the United substitutes’ bench and, for the second straight time, he did not get off it, either; when a midfielder came on at half-time vs. Liverpool, it was Marouane Fellaini.

In a nutshell, Woodward will have little in the way of good news to relay to his bosses on Monday. It will be difficult to varnish over the grim truth: United were outplayed at Anfield and the team is drifting alarmingly off course under a manager who, these days, appears to favour talking about past successes at other clubs.

Games against Cardiff, Huddersfield, Bournemouth and Newcastle over the holiday period could offer much-needed respite, but viewed another way, they look like accidents waiting to happen. Mourinho’s men are performing worse than David Moyes’ side in 2013-14, when Sir Alex Ferguson’s successor did not see out the season before being sacked.

The football was poor then and was arguably even more difficult to watch during Louis van Gaal’s two years at Old Trafford, yet the current team is plumbing new depths in terms of results and quality of play. But will the powers-that-be act? History suggests the answer is “no.”

Since Ferguson retired at the end of the 2012-13 season, the Glazers and Woodward have opted for patience whenever their managers have hit trouble.

It took 10 months in charge before Moyes was let go, despite it being clear much earlier that he was out of his depth and ill-prepared for the job. Van Gaal had a better pedigree and did win the FA Cup before being sacked — with Mourinho lined up to replace him — but he could have gone six months earlier. Moyes and Van Gaal lost their jobs after failing to secure Champions League qualification. If that same approach applies with Mourinho, then United face being stuck with him for another four months at least. Is it all his fault, though? Former club captain Gary Neville suggested after this game that the problem went far beyond the manager’s office.

“The boardroom are so naïve, it’s unbelievable,” Neville said. “There isn’t knowledge or experience above him [Mourinho] to handle him. The problem now is that it will cost an absolute fortune to lose him. United need to reset; it’s not just the manager, it’s deeper than that.”

Clubs do not clear out the management and the boardroom at the same time. Indeed, the only recent example of that came at United in 2013, when Ferguson and chief executive David Gill, who sat together at Anfield on Sunday, left at the same time. We have seen how that turned out.

Meanwhile, Mourinho does not sound like he can convince himself anymore what the real problem is. After this defeat, he complained about the “qualities” of his players, as well as their fitness record and their luck, but also said that he still believed they could finish in the top four and that he was “really, really happy with the players on the pitch.”

He is tying himself in knots with his comments and complaints and needs to change the record. As for United, they need to change the manager.