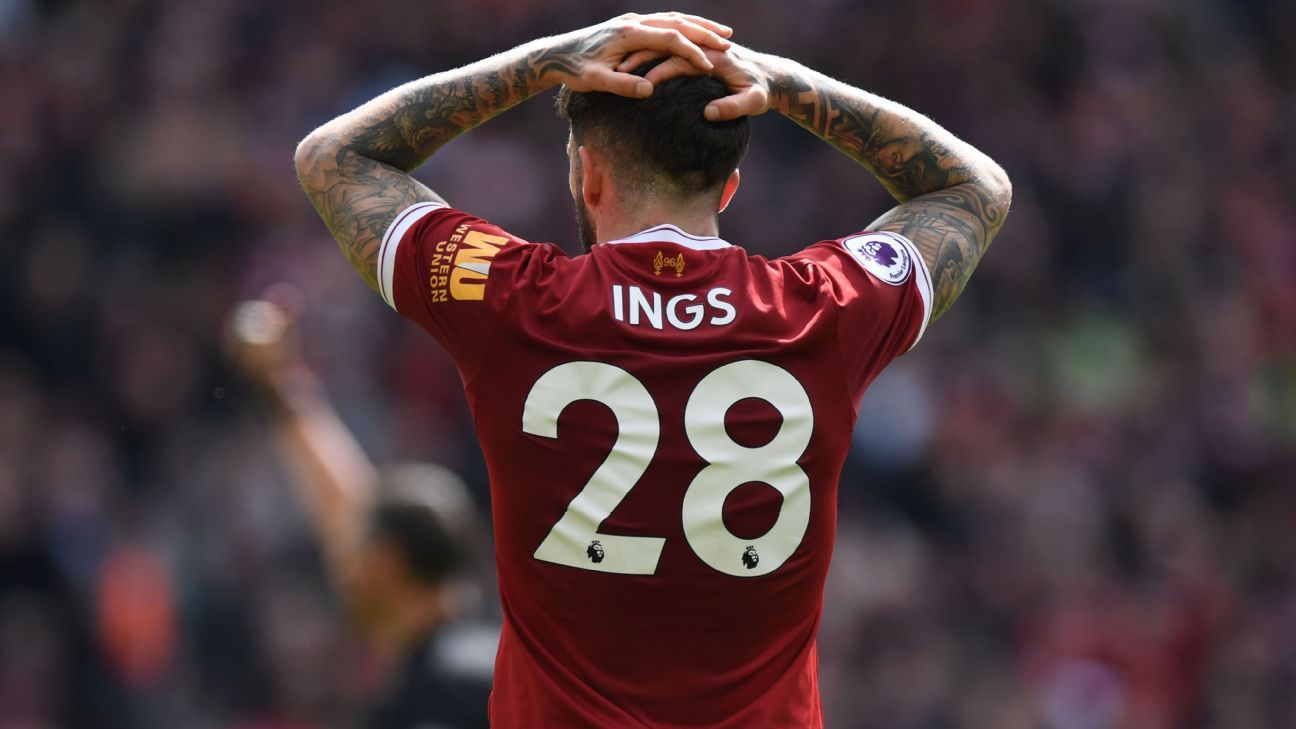 
Liverpool followed up their spectacular win over Roma in midweek with a damp squib of a performance against the Premier League’s second-bottom team. Mohamed Salah inexplicably missed a glorious early chance, Danny Ings had a goal disallowed for offside and the frustrated Reds were also denied a clear late penalty on.

It’s another point closer to Champions League qualification; a top-four spot will be secured by avoiding defeat at Chelsea next week or by beating Brighton at home on the season’s final day.

It’s becoming clear that, when Jurgen Klopp has to dip into the pool of players beneath his best 12 or 13, the drop off in quality is too great. Without the injured Sadio Mane, Liverpool’s front three never clicked and the driving midfield runs of Alex Oxlade-Chamberlain were also missed.

5 — Klopp’s options for the first XI were restricted but, nonetheless, his substitutions were utterly baffling. Only Klopp knows how the struggling Joe Gomez survived the full 90 minutes and the decision to introduce full-back Nathaniel Clyne into the forward line was even more puzzling.

GK Loris Karius, 6 — A little sloppy with his first-half distribution but, otherwise, he was a virtual spectator.

DF Joe Gomez, 4 — Started the game badly and got worse. Repeatedly gave possession away and eventually began to play far too safe to avoid making further mistakes. Improved a little in the closing stages but this was a day to forget for the youngster.

DF Virgil Van Dijk, 7 — Not exactly overworked defensively, but he was typically assured and comfortable in everything he did.

DF Ragnar Klavan, 7 — Another unfussy and composed display from the experienced Estonian. He’s a valuable player to have around, due to his ability to come in and do a consistent job when needed.

DF Alberto Moreno, 7 — Responded well after a poor display at West Brom. Not exactly faultless defensively but kept Stoke dangerman Xherdan Shaqiri quiet and made some useful forays forward. Moreno fizzed a low shot just wide and produced one brilliant cross that Salah was inches away from converting.

MF Jordan Henderson, 6 — Diligent showing from the captain, who did his best to keep his side on the front foot on an off day. Noticeably stayed close to Gomez to help the full-back through his most difficult period in the game by always being available for a pass.

MF Trent Alexander-Arnold, 6 — Started brightly and could have scored after a surging run into the box to collect a pass from Salah. The balance never seemed right between him and Gomez on the right flank. Klopp revealed after the game that Alexander-Arnold had suffered a knock.

MF Georginio Wijnaldum, 6 — Busy enough, had one or two bright moments around the box and put a snapshot into the side netting in the first half. Like the rest of the side, though, he never quite hit top gear.

FW Mohamed Salah, 5 — Started the game looking very sharp, despite a surprise early miss but, the longer it went on, the less effective he became and he grew increasingly frustrated at the physical approach of his marker Eric Pieters.

FW Roberto Firmino, 6 — No shortage of effort but the absence of Mane seemed to stifle the rest of Liverpool’s attack and particularly Firmino, who looked to be on a completely different wavelength to Ings.

FW Danny Ings, 4 — A little unfortunate with a disallowed goal that was a terrific finish, but Ings is not really a viable option in either of the wide positions of a front three. There is no chemistry between him and Liverpool’s other attackers — understandable given the lack of playing time he’s had — and he made virtually no other impression on the game before he was replaced by Clyne.

FW Nathaniel Clyne, 5 — Looked to be playing as part of a front three, which is bizarre given that his biggest weakness is end product. Unsurprisingly, he made little impression.

MF James Milner, 6 — Did his best to drive the team forward and made some thunderous challenges, but it was not to be.