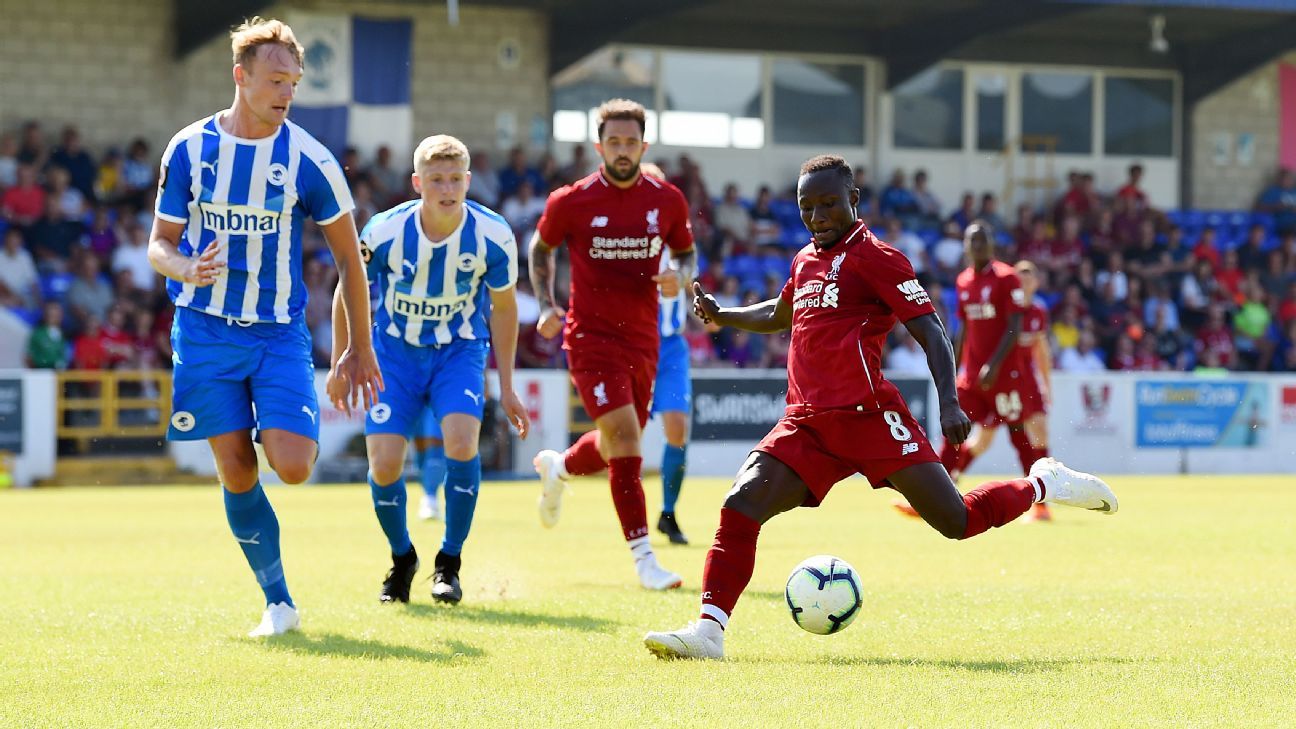 
CHESTER, England — Jurgen Klopp says he was impressed with Naby Keita’s Liverpool debut at Chester FC on Saturday, while he admitted Fabinho will need a bit more time to adjust to the team’s playing style.

The midfield pair both played 45 minutes of Liverpool’s first preseason friendly of the summer — a 7-0 victory away at the National League North side.

Fabinho, the €50 million summer signing from Monaco, started the match before former RB Leipzig man Keita was introduced after half-time with the scoreline at 2-0.

“It’s hard for them,” Klopp said of his two new midfielders. “You can see. We always measure the heart rates and if you don’t speak the language then you already have 100 when you only listen to me. So that’s how the first week is. But it’s all good.

“[For] Fabinho today it was not too easy. How I said, it was not a good half and then it’s difficult to find him in the game. Naby felt much better in the second half. That’s how it is.

“We know about the quality. We don’t test these boys. A few others have tests — the young lads need to show up in games like this, 100 percent. They, for sure, have another two, three games to do so and then we will see.”

Asked what he thought Fabinho and Keita would bring to Liverpool, Klopp continued: “You saw Naby comes from Leipzig and knows the football philosophy that’s a similar one.

“[He’s] very sharp in the challenges, very quick in mind in these situations of counter-pressing, [his] impulses look kind of natural, which is good.

“Monaco played a completely different style, so Fabinho probably needs a few more days. That’s how it is.

“But he’s a fantastic football player, a good passer, his challenges are good — a proper defensive midfielder with the option of being a No. 8 as well, his heading is good.

“So if you want to be a part of our squad then you need to be good and these two boys are.”

Liverpool played the first of their nine summer warm-up games at the same time as England’s World Cup quarterfinal win over Sweden.

Reacting to the news of the 2-0 win for Gareth Southgate’s side, Klopp feels Liverpool captain Jordan Henderson has been influential in helping England reach the last four of a World Cup for the first time in 28 years.

“So far he has played a brilliant World Cup,” the Reds boss said. “So mature, a proper leader in the team.

“You can see this team is offensively really skilled and you need a few serious people in the team to keep it together and I like how he is doing that while still being involved offensively. He had a few wonderful passes, controls the game and I really like it.

“Trent [Alexander-Arnold] won his first cap before the World Cup and then played his first World Cup game — I waited 51 years for that and he has done it already after 18. He did really well.

“I am happy for the boys but I am happy for Gareth [Southgate] as he is doing a fantastic job. England and Belgium both managers are doing an incredible job. I like it.”

Mourinho, Tottenham show they’re in title race; Barcelona in free fall; Zlatan the hero for Milan
Dortmunds Sancho admits hard spell after Man United transfer saga
How to get married and play in a semifinal on the same day!
Gerard Pique’s injury could signal end of Barcelona era
Nicolas Pepe epitomises Arsenal’s frustrations at Leeds with naive sending off in 3/10 performance