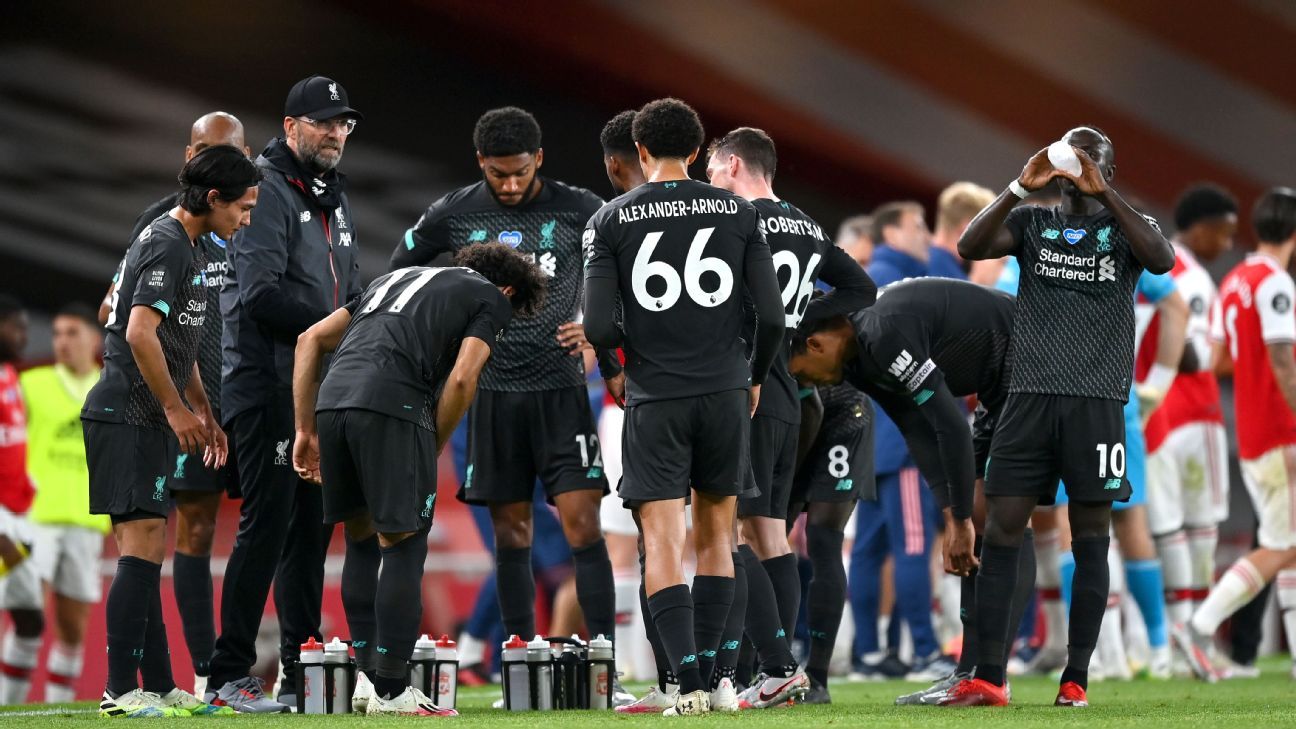 
Jurgen Klopp was right: records don’t inspire Liverpool. A sense of embarrassment almost did after Liverpool uncharacteristically gifted Arsenal their two first-half goals, but they failed to rally sufficiently and this 2-1 defeat ends any chance of surpassing Manchester City‘s record 100-point mark this season.

Nobody should be too hard on Liverpool after they ran away with the Premier League title, but the coronavirus hiatus has prolonged the sense of inevitability that has left them struggling to rally in this coda to the campaign. With the race long since won and nothing to play for beyond statistical milestones, Liverpool have drifted toward the finish at their own pace, understandably unable to replicate the intensity that put them so far ahead of the rest in the first place.

Although they responded to a thumping at City with successive wins against Aston Villa and Brighton, last Saturday’s 1-1 draw at Burnley and now defeat here at Emirates Stadium mark the first times they have dropped points from a winning position all season. And they did themselves irreparable damage by making precisely the sort of mistakes they have avoided all year long to lift their first topflight crown in 30 years.

Klopp attempted to set the right tone before kickoff. After naming the strongest lineup available to him, he spent the warm-up watching Arsenal go through their pre-match drills with typical studiousness. Discussions with his coaching staff followed as they observed Arsenal’s back five being put through their paces and it appeared normal service would be resumed when Sadio Mane put the visitors in front after 20 minutes.

Mikel Arteta could be heard coaching his players through every passage of play, in marked contrast to Klopp’s relative silence — a sign of one team learning its craft and another proven masters of it. Yet the Gunners stuck doggedly to their task with Reiss Nelson, Nicolas Pepe and Alexandre Lacazette asked to go and press to force precisely the type of errors Arsenal’s defenders made in defeat at Tottenham four days earlier.

Klopp looked bemused by an extremely rare error from Virgil van Dijk to gift the ball to Nelson, who fed Lacazette to equalise. He was left literally open-mouthed by Alisson’s 44th-minute error, passing straight to Lacazette, who returned the favour for Nelson to put the home side in front.

He ran down the tunnel at half-time and sent his players out early for the second half with no changes. They responded to the admonishment with a push to find an equaliser as Mane, Mohamed Salah and Trent Alexander-Arnold threatened in a frantic finale, but Liverpool’s usual incision was absent, a combination of their own slackness and Arsenal’s application.

“I am disappointed with the result of course,” Klopp said. “OK, for big parts of the performance it was one of the better games we played here but when you make these mistakes, you cannot win a football game in the Premier League or you need to be really lucky to win. We were not lucky today. The mistakes were too big and that’s why we lost the game. We started exceptionally well. I can’t remember such a dominant performance against Arsenal since I’m here.

“We completely deserved to be 1-0 up and then we took kind of a break. We are all humans and maybe it was just a misjudgment of the situation. We had controlled the game but in these moments, around your own box, giving these two balls away, obviously it is not helpful. In the second half, we were completely in charge. But the result is the truth and we accept that.”

Arsenal rode their luck but this was nevertheless an important victory for Arteta, who has frequently stated he wants only players who are ready to “jump on the boat” to stay at the club. Here was a clear indication that the boat could have an exciting destination if those on board can regularly replicate this level of commitment, discipline and focus.

In the long term, Arteta wants to implement a possession-based front-foot game that Arsenal produced flashes of in defeat against Tottenham, but their ability to grind out results has been questioned for years and therefore performances like this are a genuine step toward the greater resilience the Spaniard is trying to instill.

“We forced mistakes, they made them and that makes a difference,” Arteta said. “We talked a lot about how we win football games at the moment with the difference of the two teams and how we need to play to get the points. I am really pleased because they can do it. Sometimes the focus, that belief is keeping all the time the right spirit, the level of attention.”

The question remains whether they can do it on a consistent basis and when it matters most, something Liverpool have proved time and again even if records are now receding from view. They can now only tie City’s record of 32 wins in a league season. After City beat Bournemouth earlier in the evening, Liverpool are now one point short of the 19-point margin Pep Guardiola’s side won the title by in 2017-18.

“I want the points we can get,” Klopp said. “We will see what it is at the end of the season. I cannot make any negative of something really positive — becoming champions, having 93 points so early in the season. I’m not the type of person who makes now something negative of it because we cannot get the 100 anymore. We get the points we deserve and we will see where that will be. At the moment it is 93, two very difficult games to go. These boys play an exceptional season and nobody can take that away from them.”