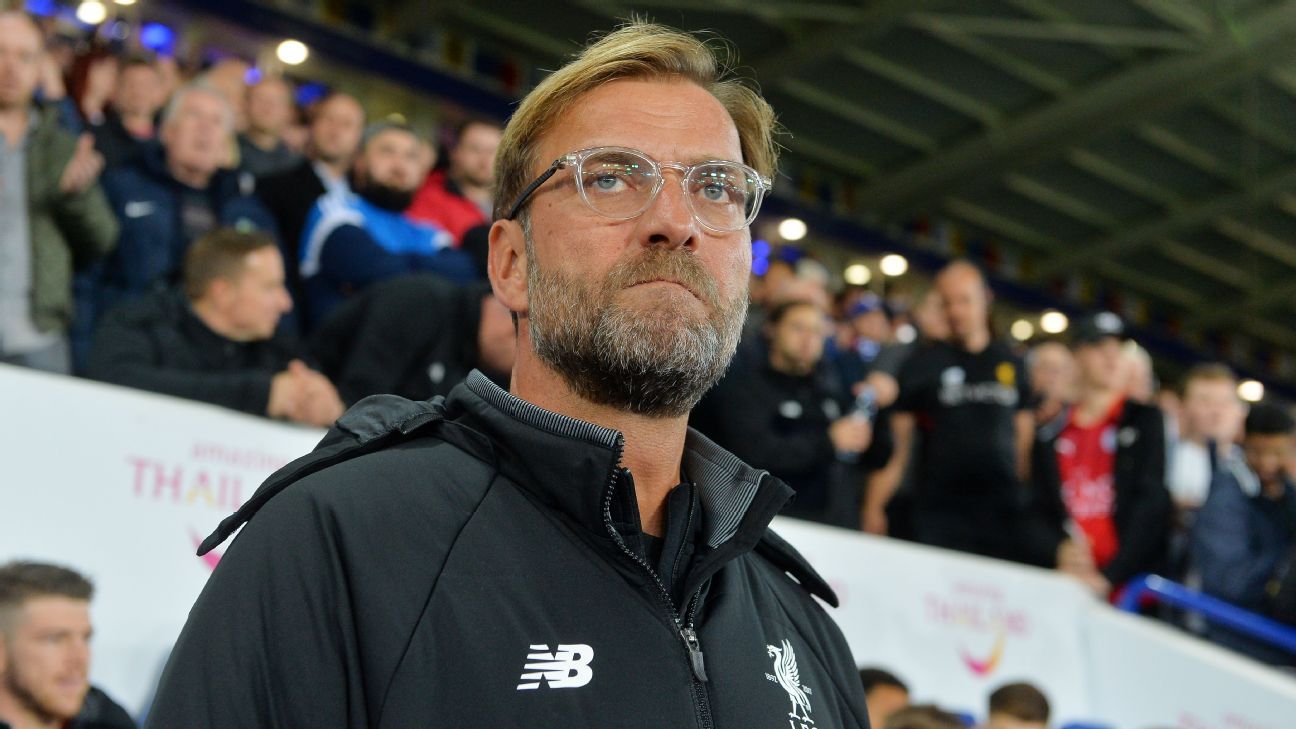 
The path from saviour to scapegoat is a short one at Anfield. Jurgen Klopp has to be careful that his career does not go down a blind alley.

Liverpool’s 2-0 Carabao Cup defeat by Leicester City is not disastrous but it adds to the pressure building on him. The Reds return to the King Power Stadium in the Premier League on Saturday and the spotlight will be on the 50-year-old. Nearly two years into his tenure on Merseyside, questions remain about Liverpool’s direction and there are no easy answers.

Klopp’s attack has been seductive and exciting. They have also been wasteful. Dominating matches is not enough if the ball is not going into the opposition net.

At the other end, the defence is insecure. They leak goals with predictable regularity. The same mistakes occur again and again. Klopp came to Anfield renowned as a manager who improved players, but the pattern of errors by his back four threaten that reputation.

The main concern is that the Liverpool manager appears to have been in denial. After the Leicester match he said he was “sick of this,” when talking about his team’s capacity to leak goals. Is this finally a wake-up call?

For the first few weeks of the season, Klopp expressed surprise (and irritation) that the focus was on his defence and not his attack. That would be a legitimate argument if Liverpool were piling up the goals. If they were winning 5-2, then the back-line’s lapses could be overlooked. The problem is that Klopp’s team are not killing off the opposition.

Too often their approach work is impressive but rival teams have learned to let Liverpool play in areas where they cannot do damage. In their last Premier League game, Burnley came to Anfield with a plan. Sean Dyche flooded the zones around the penalty area and let Klopp’s men have the ball 25 or more yards out. Shots from that range are considerably less dangerous than efforts inside the penalty area. Burnley were compact, rode their luck and looked to exploit Liverpool’s weaknesses on the break.

It’s true that the visiting side were lucky in one respect to come away with a point in the 1-1 draw. On the other hand, Dyche’s team had two late chances — from set pieces, Klopp’s Achilles Heel — and could reasonably claim that they could have seized the three points.

So much of Klopp’s appeal is his personality. On the Kop, the urge to “support and believe” is strong. He has always made a point of connecting with fans and his attempts to rouse the crowd have drawn a largely favourable response, but belief begins to ebb away when results go wrong.

The Liverpool manager responded to criticism of the summer’s transfer policy and the inability to sign a central defender when the Virgil van Dijk deal fell through by saying that there were no defenders available that he considered as upgrades to the current squad. If this is true, it defies belief. The back four is a shambles. It is one of the worst defensive units in the Premier League. Van Dijk would not have solved all the problems, of course, but in a summer where Liverpool were prepared to invest £150 million more than they eventually spent, it goes against all football logic that they could not find three or more defenders who would improve the team.

The focus on strengthening the squad is lopsided. Attacking players have arrived on Merseyside and look spectacular. Liverpool’s forwards display trickery, imagination, pace and intelligence but the balance is not quite right. They are creative, but not clinical.

Daniel Sturridge, who has the ability to be one of the sharpest goal scorers in the division when fit, has taken to shooting from distance or dribbling into traffic. Sturridge thrived in space behind opposition defences. His movement, pace and guile stretched them; now, though, teams know that by sitting deep they can suffocate Klopp’s side. The England striker has taken to ranging outside the box in search of the ball and shooting from distance.

The first angry calls for Klopp’s head are appearing on social media, but it’s too early for that. He was the best manager available to Liverpool two years ago and remains superior to any viable candidates. He retains the support of the club’s owners, Fenway Sports Group, who have bought into Klopp’s adoration as much as (if not more than) the most ardent Kopites.

Even so, this is a dangerous time for the manager. Another bad night at the King Power this weekend will ramp up the pressure. A disappointing draw against Sevilla in the Champions League has set up two away ties, against Spartak Moscow and Maribor, that are awkward but winnable. Any mistakes in Europe will be costly.

In the league, an away match against Rafa Benitez’s Newcastle United is followed by two crunch games, at home to Manchester United and away to Tottenham Hotspur. Unless Liverpool tighten up, their top-four ambitions will be undermined. Last season, the fourth-place finish gave the team a sense of progression but Klopp needs to restore that feeling of momentum. It’s currently stalling.

After 23 months on Merseyside, the goalkeeping problems remain, the defence has become worse, the midfield look no more coherent than before his arrival and the attack, as exciting as it is, has to get sharper.

Heavy Metal football? It’s more like a Little Mix video: superficially attractive with no real depth and instantly forgettable. Liverpool need to get back on track very quickly. You do not have to stray far off the correct route for the mood to turn at Anfield. Unless Klopp finds the right direction very soon, the clamour of criticism will grow louder.