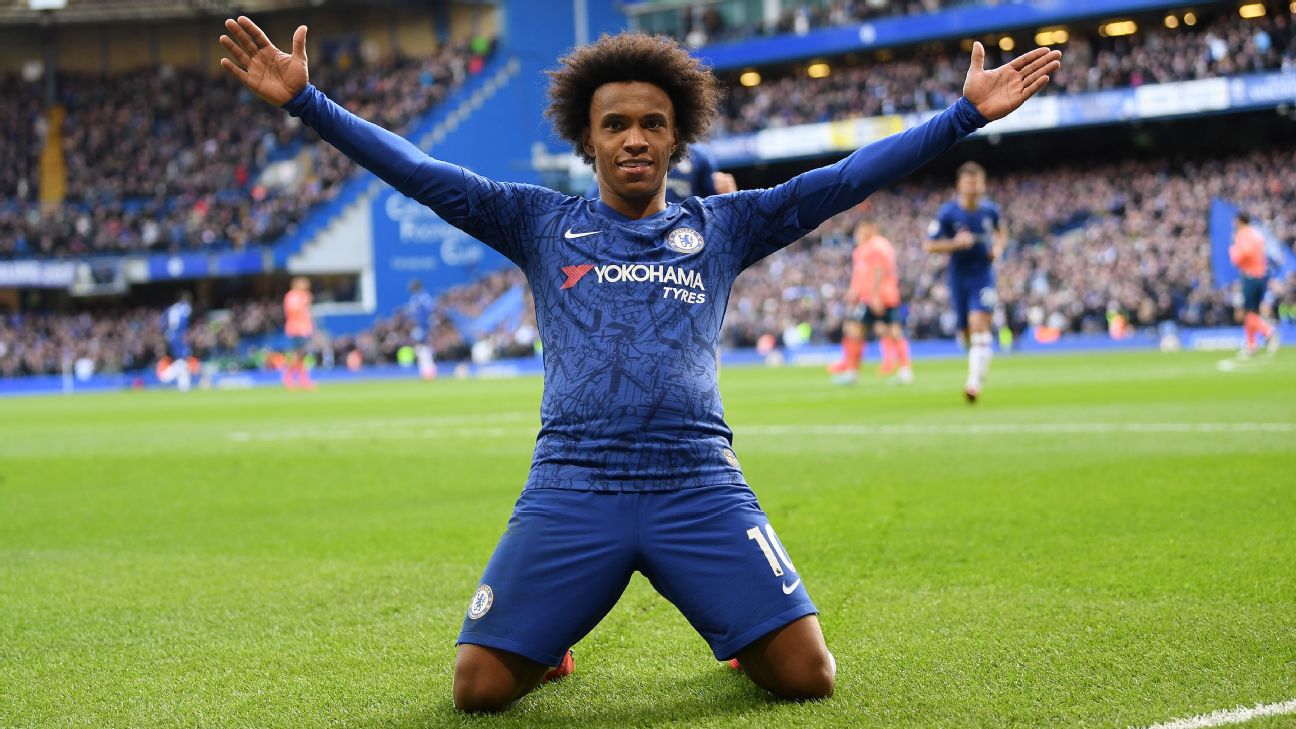 With the Mirror reporting that Willian believes his Chelsea career is already over, Mundo Deportivo goes further by suggesting that Barcelona and Paris Saint-Germain are favourites to land the Brazilian this summer.

PSG’s sporting director Leonardo has made no secret of his admiration for Willian, and he believes the attacking midfielder’s versatility would suit his side perfectly. Willian’s contract is due to end on June 30, and the player himself has suggested that talks with Chelsea have proved fruitless, and that he’s now looking for another club with his stay in London all but cut short by the coronavirus pandemic.

Barcelona have also been thinking about Willian for some time and they’re hoping agent Kia Joorabchian might hold the key to the move by helping facilitate Philippe Coutinho‘s exit from Barca to Chelsea, with Willian heading in the other direction.

Barcelona are said to be following Willian’s situation carefully and after today’s developments, may try to approach him in the following weeks.

14.28 BST: Tottenham defender Serge Aurier has said he plans to return to PSG before the end of his career.

Aurier, 27, joined Spurs from the French champions in 2017 but has revealed that returning to Paris is part of his “plan.”

He was born in Africa but raised in the Parisian suburbs and grew up supporting PSG — despite numerous social media outings in Arsenal shirts.

Speaking with Canal+ Sport Afrique, he said: “Finishing my career with PSG is my plan. I would like to finish there. Above all, it is the club of my heart.

“There is a feeling of unfinished business. PSG has been my club since I was a kid — I would go and watch matches at Parc des Princes. It was a dream for me to join PSG and that dream is not finished, at least not for me.

“If I was to finish my career at PSG, I would love that. I could have spent my entire career there and that would not have upset me at all.

“All my family is in Paris, I am Parisian, I cannot dream of better. I am following PSG from afar but they remain my club — that will not change.”

13.43 BST: Arsenal are leading the race to acquire the services of Bournemouth winger Ryan Fraser next season, according to Team Talk.

The Gunners have been monitoring the 26-year-old for a couple of years and the report claims they are in pole position to sign him on a free transfer when his contract runs out in July.

Arsenal are also keeping an eye on Chelsea midfielder Willian as Mikel Arteta looks to bolster his squad for his first full campaign with the club next season.

13.01 BST: Edinson Cavani’s future has been a hot topic since the start of the coronavirus pandemic as the Uruguay international will be a free agent whenever the season finishes.

Atletico Madrid came close to signing the 33-year-old back in January and despite recent links with Boca Juniors in Argentina, Brazilian outlet UOL reckon El Matador has already chosen to join Atleti.

Cavani still completely believes in Diego Simeone, who has persisted in his attempts to land his fellow South American from PSG, although the contract length and salary have not yet been studied.

11.52 BST: Roma boss Paulo Fonseca has said he is desperate for loanee Chris Smalling to stay at the club.

The Manchester United defender joined the Serie A side on a season-long loan deal in August and has excelled during his short stint, scoring two goals in the process.

“He surprised me,” Fonseca told A Bola.”‘He’s a defender that had never left England and he arrived in a league very demanding of tactics, where details make the difference.

“Chris adapted very quickly. He’s an extraordinary guy, very intelligent. He has characteristics that I really appreciate in the centre.

“If possible, I would like him to stay. He’s a great professional and person, it’s a pleasure to have him here with us.”

11.19 BST: A report in Marca says neither Antoine Griezmann nor Barcelona are considering the Frenchman’s exit this summer.

Griezmann, a €120 million signing from Atletico Madrid last year, has been linked with a move away from Camp Nou after struggling to take off in his first campaign at the club.

Some reports have suggested he would be offered as a makeweight in potential deals for PSG’s Neymar or Inter Milan’s Lautaro Martinez.

However, the Spanish publication insists that neither the player nor the club will give up on each other when the season, coronavirus permitting, ends.

Griezmann, 29, has made 37 appearances for Barca, scoring 14 goals, and has been a regular under both Ernesto Valverde and Quique Setien.

10.37 BST: According to L’Equipe, Paris Saint-Germain forward Kylian Mbappe will be going nowhere whenever this season ends.

Football is currently on pause due to the coronavirus pandemic but that has not stopped numerous links between the France international and a move to Real Madrid.

However, the French publication claims that the Emir of Qatar Tamim bin Hamad Al Thani (PSG’s owner via the Qatar Sports Investments group) has ordered that Mbappe is not to be allowed to leave “come wind, rain or snow.”

The report also adds that the global outbreak makes it likely that fellow superstar Neymar will also remain in the French capital this summer, although it claims “selling him would not be a problem either.”

With Financial Fair Play also on pause, it could benefit PSG in terms of potential contract extensions for both players.

09.58 BST: Mario Gotze could leave the Bundesliga for good and head south where Serie A side AS Roma have set their sights on him, Corriere dello Sport reports

Germany’s 2014 World Cup hero is set to leave Borussia Dortmund four years after returning to the Westfalenstadion for a second stint following his stint at Bayern Munich. However, the 27-year-old has only played a peripheral role, even more so this season where he only made 13 appearances in the top flights so far and completed the full 90 minutes only once.

Previous reports had claimed that Gotze would prefer a move to another of Europe’s top leagues rather than join another Bundesliga club.

Viduka, who was playing for Leeds United at the time, was in the city for talks with Ferguson when he was invited to attend one of Elton John’s concerts.

08.42 BST: Paul Pogba is back in the headlines in Spain with Diario AS reporting on their front page that the Manchester United player is “closer” to a move to Real Madrid.

Coach Zinedine Zidane remains keen on Pogba, although, as sources told ESPN last month, senior figures at the club believe the midfielder to be over-priced with United valuing him at more than €100m.

AS claims that “the Frenchman will prioritise an offer from Madrid ahead of one from Juventus or a renewal with United.”

Pogba’s agent Mino Raiola has said he hopes he can “bring a great player to Real Madrid” this summer. 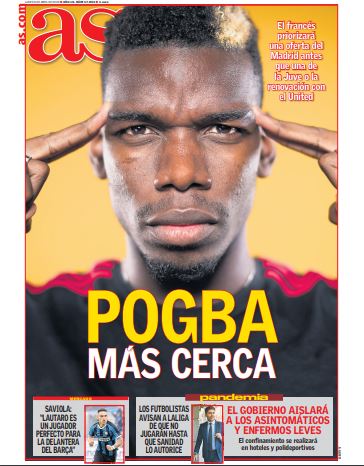 08.00 BST: Leipzig defender Dayot Upamecano, 21, was widely regarded as one of the bargains in the upcoming summer transfer windows.

Clubs such as Bayern Munich and Arsenal have long been linked with the player many rate as the Bundesliga’s best central defender, who has a €60m release clause.

Under contract at Leipzig until 2021, the Bundesliga club now hope they could profit from the current shutdown across world football and persuade Upamecano to not only remain at Leipzig for another season, but also agree to a new contract to avoid losing him on a free transfer in the coming summer.

“Such fees are rather unlikely this summer. You have to admit that,” Leipzig sporting director Markus Krosche told kicker of Upamecano’s release clause, adding that he did not want to put any pressure on the defender who has yet to make his senior debut for France. “He must find out how he sees his future, what his plans are. Maybe that has changed with the current situation.”

PAPER TALK (by Nick Judd): Pjanic could be available for €40-45m

Juventus midfielder Miralem Pjanic recently left Turin to visit family in Luxembourg, and it might not be the last time he leaves Juve this year. The 30-year-old’s long-term future could also be away from the club, said Calciomercato, who reported that he could be sold for the right price.

Pjanic has been a key player this season, and he fits Maurizio Sarri’s shape and tactical approach perfectly. However, the club’s chief football offer Fabio Paratici is realising that the Bosnian is not indispensable, and in fact could net the Bianconeri some reasonable money, which could help them strengthen their squad further.

Juve currently pay Pjanic €11.5m a year, and he has a further three years on his contract. All of which means that Juve will listen to offers of around €40-45m, a fee that has been drastically affected to the tune of €10-15m by the coronavirus pandemic, but which could still pave the way to help fund a changing of the guard this summer.

– On Sunday, Transfer Talk reported that Barcelona were looking to sign Paris Saint Germain left-back Layvin Kurzawa on a free transfer. Now the Mirror suggests that the Blaugrana face competition from Arsenal. They’re reporting that the Gunners will make a second attempt to sign the Frenchman, though the player himself is said to favour a mover to Spain over north London.

– Cagliari face an uphill battle keeping hold of loan star Radja Nainggolan beyond the end of the season, reports Calciomercato. Nainggolan would have to take a pay cut to make his loan move to Sardinia permanent, which isn’t beyond the realms of possibility, though the player himself hasn’t ruled out returning to Inter and evaluating other offers. One possible solution could be for Cagliari to offer cash plus Uruguayan midfielder Nahitan Nandez, who is being courted by Inter and other clubs.

– Radamel Falcao‘s next move could take him to Qatar or Saudi Arabia, reports Marca. Clubs from each country, including Al-Sadd and Al-Hilal, have been sending offers to his current club Galatasaray. The Turkish club are looking to cash in from the interest in the Middle East and are likely to demand €14m for the striker.