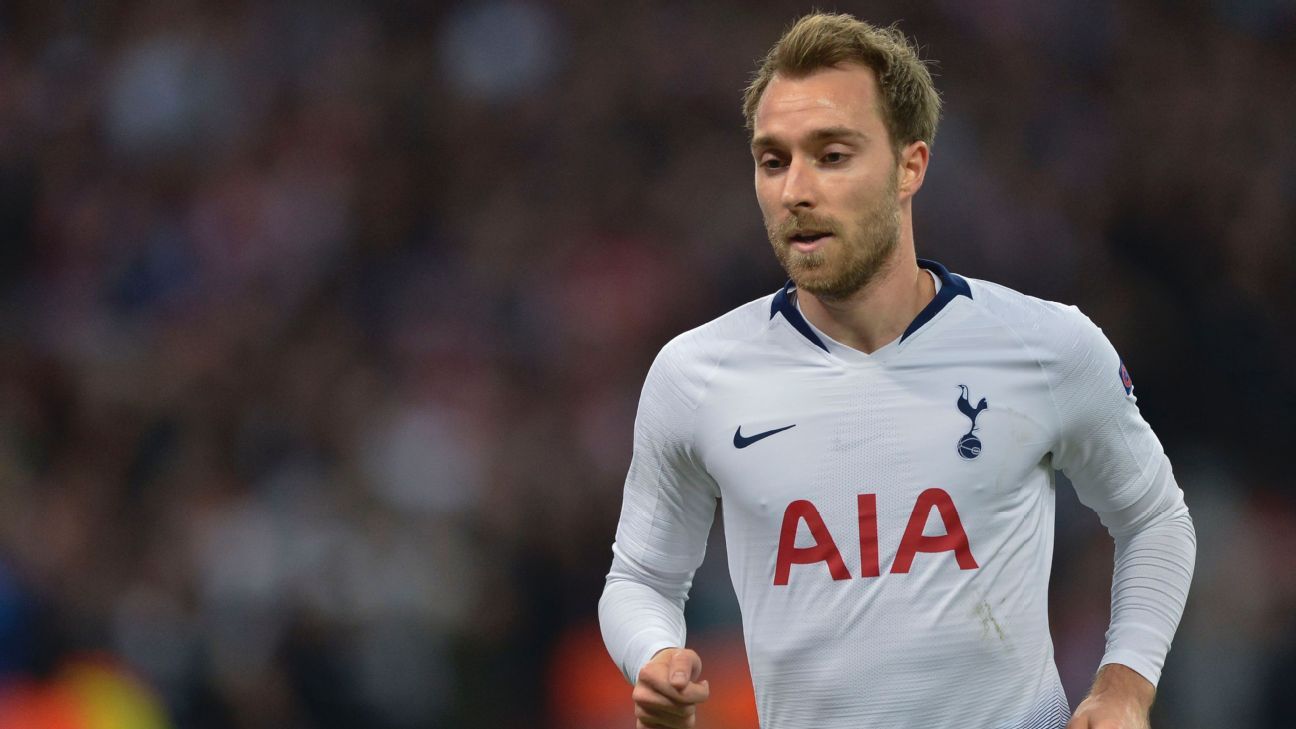 TOP STORY: Real will have to pay £200m to land Eriksen

If Real Madrid want to sign long-term target Christian Eriksen this summer it will cost them a world-record fee, according to the Sunday Star.

The British tabloid claims that Tottenham will not sell their star playmaker for anything less than £200m, despite his contract expiring in June 2020.

Denmark international Eriksen joined Spurs from Ajax in 2013 in a £12.5m move, and has gone on to score 48 goals in 198 Premier League appearances for the club.

The 26-year-old is seen as a player who returning boss Zinedine Zidane can build a new dynasty around, but he won’t come cheap, especially if Los Blancos also want to bring in Eden Hazard.

To that end, the Sunday Express. reports that Gareth Bale could be on his way to Chelsea to facilitate the signing of Hazard, both clearing a space for a forward in their squad and pretty much offsetting the cost of a transfer in one fell swoop.

Bale scored in Madrid’s 2-0 win over Celta Vigo on Saturday , Zidane’s first match of his second spell in charge, and he may feel there is still a chance of resurrecting his career at the Bernabeu.

18.30 GMT: Could Norwich move for a talented Man United youngster?

According to reports in England, the Canaries are keen on signing Man United goalkeeper Dean Henderson. The 22-year-old shot-stopper has yet to make his first-team debut with the Red Devils but has impressed this season while on loan at Norwich’s promotion rivals Sheffield United.

The report indicates that if Norwich achieve promotion Henderson could be a target for the club to upgrade the goalkeeper position, currently manned by Dutch veteran Tim Krul.

17.41 GMT: Benfica star Joao Felix has been tracked by almost every big club in Europe — Real Madrid, Man United, Chelsea … you name it. Liverpool reportedly had a £61m bid rejected in January and the 19-year-old is in no rush to make a big move just yet.

“My dream has always been to play for the big teams and in the big competitions,” he told Marca. “But I’m here and I’m very happy with Benfica, which, like those teams, is also a big one in Europe.”

16.28 GMT: It seemed certain that Juventus would sign Marcelo from Real Madrid, but the left-back now looks set to stay in Spain as Il Bianconeri report that Zinedine Zidane doesn’t want to let him leave.

15.45 GMT: Tottenham Hotspur chairman Daniel Levy has told the club’s official supporters’ trust that summer transfer plans will not be affected by the cost of the new stadium, according to published minutes from the meeting.

Last summer, Tottenham became the first team in Premier League history not to sign any players since the introduction of the transfer window, and they failed to make any additions in January either. However, THST Official released a report detailing a meeting with Levy, in which they were told that money has been set aside for signings in the summer — with more available should the club sell players.

15.09 GMT: Bayer Leverkusen forward Julian Brandt has found some fine form after switching to a more box-to-box midfield role this season. And now German magazine Kicker report that Real Madrid and Atletico are battling it out with Borussia Dortmund for his signature.

14.29 GMT: Robert Pires knows a thing or two about playing for Arsenal and he’s got some advice for Unai Emery over the potential signing of Rennes forward Ismaila Sarr.

He told Sport24: “It would not hurt Arsenal to sign him, but I do not know his price [laughs]. ‘He has the profile to evolve at the Gunners. He would adapt quickly to the way of play wanted by Unai Emery.”

13.40 GMT: Antoine Griezmann has offered himself to a number of Europe’s biggest clubs, including Barcelona, but the Catalan club are not currently contemplating a move for the Atletico Madrid forward, sources have told ESPN FC.

Griezmann, 28, turned down the chance to join Barca last summer but has grown increasingly frustrated at Atletico this season. Sources close to the France forward have said he is prepared to take a salary reduction and revealed he was even looking for an exit prior to last week’s Champions League elimination against Juventus.

But various sources close to Barcelona have confirmed to ESPN FC that Griezmann is not the type of attacker the club are looking for as they seek a long-term replacement for the 32-year-old Luis Suarez. They favour a younger option. Eintracht Frankfurt’s Luka Jovic and Celta Vigo’s Maxi Gomez have both been watched.

There would also be concerns about Griezmann’s wages, even though he’s prepared to take a cut. He earns €24m at Atletico, an amount which Barca would not be prepared to match. Even if they were, it would require shifting several big earners off the wage bill.

However, they are rather full of non-EU passport holding players at the moment, so may look elsewhere.

11.40 GMT: Sevilla have announced the return of sporting director Monchi to the Spanish club after his two-year spell at Roma ended earlier this month.

Monchi had been linked with taking up a similar position at Arsenal as a replacement for the departed Sven Mislintat but instead returns to Sevilla, who announced in a club statement that he will be presented to the media on Monday and officially begin work on April 1.

The 50-year-old had worked closely with former Sevilla coach Unai Emery, who is now in charge at Arsenal, and the pair helped the club win three consecutive Europa League titles.

Monchi joined Roma in 2017 and had been billed as one of the best transfer gurus in the game. However, while he ensured the Giallorossi brought in big fees for some of their biggest names, the replacements have generally not proved to be up to scratch. His exit came soon after the sacking of Eusebio Di Francesco as manager.

This move could see could see Marc Overmars make a sensational return to Arsenal, the club he graced with such distinction as a player. Overmars is currently director of football at Ajax and has caught Arsenal’s eye after doing an incredible job with a Dutch side that just reached the last eight of the Champions League for the first time since 2003.

He has also brought through the likes of Frankie de Jong, who was bought from Willem II for £800,000 and has been shipped to Barcelona for £65m. Not bad going.

According to Football.London, Ajax are aware of Overmars’ interest in returning to London — interest that must have grown in light of Monchi’s U-turn.

10.55 GMT: Brazil international striker Alexandre Pato has left Chinese Super League side Tianjin Tianhai, the former AC Milan forward announced on social media. Pato, who joined the club two years ago from Villarreal, released a statement on Instagram declaring his stint in China was over.

“I’d like to inform you that my adventure in China has come to an end,” the 29-year-old said. “These two years in China were full of happy moments and new experiences. I am quite sure that China made me grow up as a man, I learnt (a) different culture and habits of this great country.

The cancellation of his contract with Tianjin means Pato is now a free agent and expected to return to his native Brazil after a successful two-year spell in the CSL.

09.55 GMT: If Real Madrid want to sign long-term target Christian Eriksen this summer it will cost them a world-record fee, according to the Sunday Star.

The British tabloid claims that Tottenham will not sell their star playmaker for anything less than £200m, despite his contract expiring in June 2020.

Eriksen, 26, is seen as a player who returning boss Zinedine Zidane can build a new dynasty around, but he won’t come cheap.

09.00 GMT: Aaron Wan-Bissaka has impressed for Crystal Palace this season and they reportedly want £40m to even consider selling him, which may just put off Arsenal, say the Sun.

The Mirror says Tottenham Hotspur are stepping up their efforts to bring Ryan Sessegnon north of the Thames, as the Fulham prodigy stalls on contract talks with the relegation-bound side.

The report claims that Fulham’s attempts to persuade the 18-year-old to sign a long-term deal at Craven Cottage have hit a dead-end.

Manchester United are known to be keen on signing a player who has emerged as one of English football’s brightest young talents, but the player himself is understood to be keen on remaining in London rather than heading north.

Spurs are readying a bid of £50 million for a player who has also captured the attention of Paris Saint-Germain, who are equally desperate to lure him across the Channel, having coveted him for the best part of a year.

The paper suggests that Spurs could sign Sessegnon, who would be the club’s first signing in two transfer windows, and loan him back to Fulham who, let’s face it, will be playing in the Championship by then.

No loan for Foden

Sessegnon might not be keen on Manchester, but Pep Guardiola is insisting that his own teenage sensation won’t be heading out of the Etihad anytime soon.

Phil Foden is becoming an increasingly prevalent presence at Manchester City and scored for the club in their 7-0 hammering of Schalke midweek.

The Mirror reports that a growing number of teams have been attempting to take the 18-year-old on loan next season — to no avail.

The FA Cup escapologists are still eyeing the quadruple this season, having come back from the dead against Swansea in the competition on Saturday.

Guardiola still sees Foden as being an integral part of the legacy he’s creating.

— The Sun reports that West Ham are worried about missing out on Uruguay hitman Maxi Gomez if Celta Vigo get relegated and his release clause shrinks by a half. That clause is currently a hefty £21.3 million, but if the Spanish side drop out of La Liga, Gomez will get a whole lot cheaper.