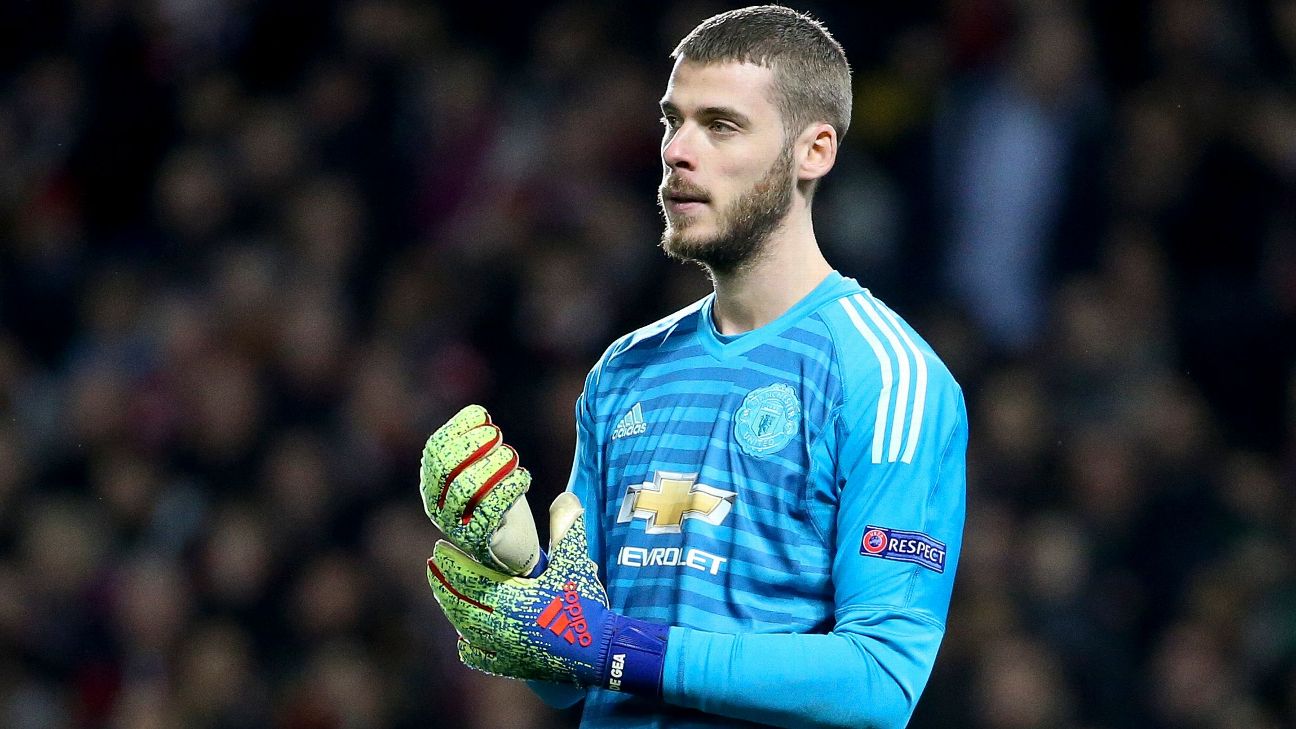 Real Madrid want David De Gea; David De Gea wants to play for Real Madrid … these are things we know. But the Manchester United goalkeeper failed to get his move a few years back and then watched as Real signed Thibaut Courtois from Chelsea.

With sources telling ESPN that United are keen to tie De Gea down to a new contract before his current one expires in 2020, you would think that might be the end of it. Not so. The Sun claim that Real, and new/old manager Zinedine Zidane, are back in the hunt and ready to offer a swap deal for Courtois in order to land De Gea.

The problem being that the Belgium keeper wants to stay and, so the paper says, “if that is not possible, he would prefer to join Paris Saint-Germain instead over the close season.”

This one could rumble on for some time yet.

Barca, Juventus, Manchester City, Liverpool and Arsenal have also been linked with the Spain under-21 international, according to reports in the Spanish press. While Madrid were reportedly closest to triggering his €50m release clause this summer.

A source close to the player told ESPN FC that several of Europe biggest clubs had shown an interest — while making it clear that no decision had yet been made over his future, with Junior focusing on getting back to full fitness, having been troubled by hamstring issues in recent weeks.

09.58 GMT: A few days ago, sources told ESPN that Atletico Madrid striker Antoine Griezmann has offered himself to a number of Europe’s biggest clubs, including Barcelona. But that the Catalan club aren’t interested.

Since then, the Spanish media have been all over the story and here are some of the ways they are looking at things.

El Chiringuita claim Barca will do everything to sign Griezmann (take that with a pinch of salt), while Sport say that the club wants to sign Eintracht Frankfurt’s Luka Jovic instead — you may remember that we reported back in November that the 20-year-old was being scouted.

Marca say Barcelona looking for someone “totally different” to Griezmann, while Mundo Deportivo insist that Andre Silva, who is on loan at Sevilla from AC Milan, is an option.

If Barcelona aren’t keen, then Bayern Munich and Manchester United are two clubs who will be.

09.40 GMT: Manchester City are closing in on an £80m summer deal for Saul Niguez after moving ahead of Barcelona in the race to sign the Atletico Madrid midfielder, sources have told ESPN FC.

City manager Pep Guardiola has identified Saul, 24, as a long term replacement for Fernandinho, having failed to beat Barcelona to the €75m signing of first-choice Frenkie de Jong from Ajax.

Sources said that Barca have been made aware of City making firm steps to seal a deal for the Spain midfielder and that Atletico will need to raise funds in the summer through player sales.

09.04 GMT: Bayern Munich president Uli Hoeness says that the club will invest like never before this summer.

With wingers Arjen Robben and Franck Ribery departing in the summer and Bayern struggling to match their previous achievements on the pitch this season, the German champions are looking at an overhaul.

“We are currently rejuvenating our team,” Hoeness said at the side of a PR event on Tuesday evening. “It’s FC Bayern’s biggest investment programme ever.”

Having already signed 2018 World Cup winner Benjamin Pavard from league rivals VfB Stuttgart, Bayern Munich are expected to strengthen and reports have linked Lille attacker Nicolas Pepe, 23, with a €80m move, while Real Madrid’s Gareth Bale has also been mentioned as an option by Spanish outlets.

In the winter, Bayern were also in the market for Chelsea winger Callum Hudson-Odoi, 18, but despite his contract expiring in 2020, the England international could reassess his situation at Stamford Bridge. Germany attacker Timo Werner, 23, and France defender Lucas Hernandez, 23, have also been linked with Bayern.

08.30 GMT: Jose Mourinho says he has turned down “three or four offers” since leaving Manchester United in the summer.

Speaking to BeIN Sports France, the Portuguese coach said: “It’s been two and a half months since I’ve been without coaching and I’m already preparing for my next challenge. I know exactly what I don’t want, that is why I’ve turned down three or four offers. I know what I want, not the name of the club, but the type of work and the workload. I want to coach a team starting in June, in time for pre-season.”

Barcelona are in pole position to sign rising Ajax star Matthijs de Ligt, according to AS.

The Catalan giants are keen to strengthen their central defense after Samuel Umtiti‘s injury-plagued season, and Barca president Josep Maria Bartomeu believes now is the right time to begin a transition at the position, before any potential decline in the form of defensive stalwart Gerard Pique.

De Ligt has been on the radar of a string of top European clubs since making his Ajax debut as a 17-year-old and becoming the club’s youngest-ever captain a year ago.

His performances in the Dutch side’s Champions League exploits this season have further accelerated his move to an elite club, and with the likes of Juventus, Paris Saint-Germain and Bayern Munich also keen on the Netherlands international, Barca want to seal a deal sooner rather than later.

The Bosnia international has consistently impressed in eight years in Serie A that have taken in spells at Roma and the Old Lady, but reports claim the 28-year-old has been identified as the man to spruce up a Los Blancos midfield that has been lacking creativity for large parts of the season.

Pjanic’s growing market value may tempt Juve to sell, especially considering pressure to balance the books after the signing of Cristiano Ronaldo from Madrid last summer. The Italian champions made no significant sales to offset the huge fee and wages paid to secure the Ronaldo deal, so this summer may well be the time to cash in on one of their most prized assets.

Former Manchester United defender Rio Ferdinand has called on the Old Trafford hierarchy to appoint caretaker manager Ole Gunnar Solskjaer on a permanent basis, and also told the Irish Independent of the type of players he hopes to see come through the door this summer.

Ferdinand, 40, who racked up more than 400 appearances for the Red Devils in a 12-year spell, said: “That display [against PSG in the Champions League] alone shows why Solskjaer has earned the right to have a chance to be the club’s next permanent manager, and I’m sure he will get that opportunity.”

When asked about who he would like to see join United, he added: “Every player needs to have a certain DNA and too many have been signed by the club in recent years that lack those qualities.

“It’s not just talent, it’s much more than that. Are you good enough to be a United player, do you want it enough, do you understand what it means to wear the shirt and represent the club?”

– Toby Alderweireld has cast fresh doubt over his Tottenham Hotspur future after saying he doesn’t know if he will be at the club next summer. Speaking to Sky Sports News, he said: “There’s a lot to play for this season. And in the end I have a year contract left at Spurs, so I don’t look further than this season. Other things I don’t know. I am very happy at Spurs, so we will see what the future brings.”

– Arsenal manager Unai Emery has been offered the chance to sign long-term Gunners target Gelson Martins, according to The Sun. The 23-year-old signed for Atletico Madrid only last summer, but after failing to impress under manager Diego Simeone in the first half of the season, the Portugal winger was loaned to French side Monaco.

– Watford forward Gerard Deulofeu is rumoured to be interested in a move to AC Milan. The Spaniard has impressed at Vicarage Road this season, but Calciomercato claims a return to the Champions League for the Rossoneri would free up funds for a move while also further swaying the 25-year-old towards a move to the San Siro.