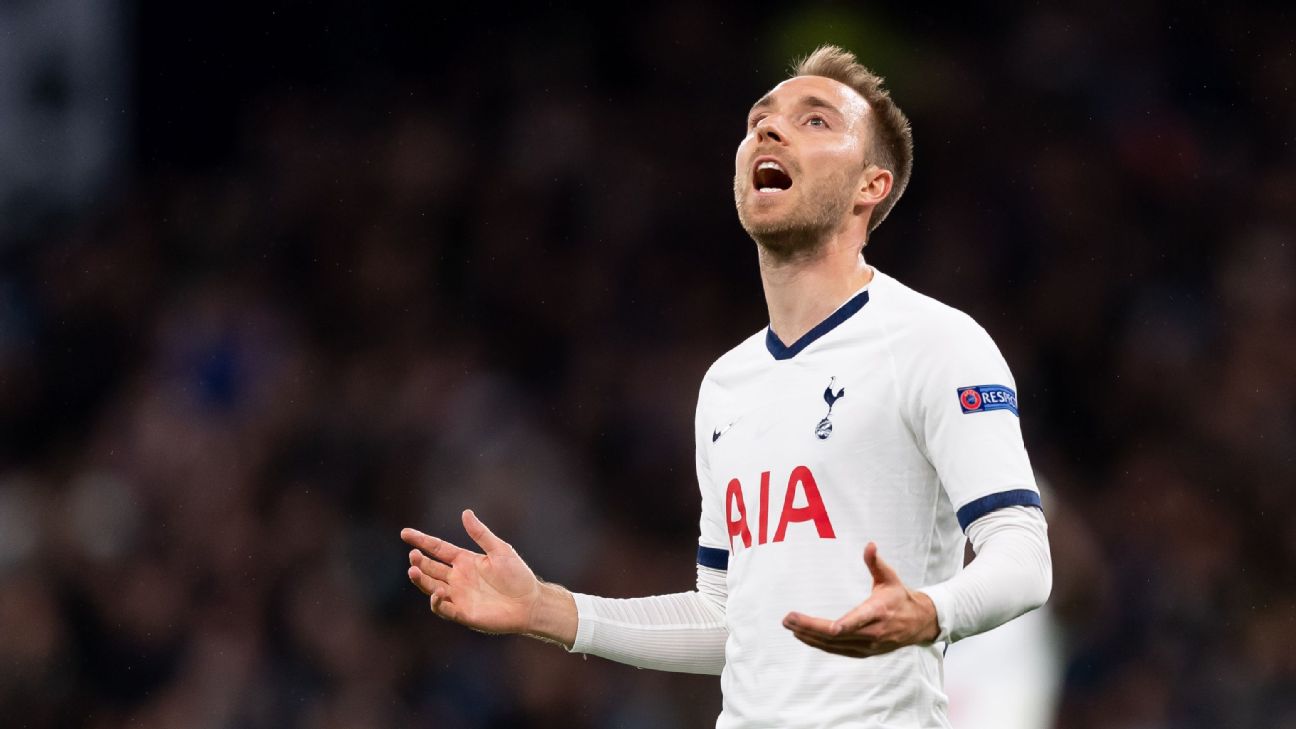 Paris Saint-Germain are plotting a huge move to snap up Tottenham Hotspur’s Christian Eriksen from under the noses of Real Madrid, the Daily Mail are reporting.

The French champions are willing to completely revamp their midfield in order to land the 27-year-old and are prepared to part with World Cup winner Julian Draxler and £22.5m signing Leandro Paredes to accommodate their star man.

The Danish superstar has become frustrated at Spurs and recently turned down a new deal. Eriksen’s current contract expires in the summer, which could tempt the Premier League side to cash in on the player man in January.

Perhaps more interestingly, current regulations allow Eriksen to sign a pre-contract agreement outside of England in January, which could tempt the midfielder to hold out until the end of the season. PSG are no strangers to splashing the cash, and Les Parisiens are believed to be preparing a lucrative to land their man.

Sterling, 24, last signed a contract extension in November 2018, but amid interest from the Bernabeu the Premier League champions are prepared to increase his salary by another 50% and make him the club’s highest-paid player.

13.07 BST: Manchester United are considering extending midfielder Nemanja Matic‘s contract at the club by another season amid interest from inter Milan, according to Corriere Dello Sport.

Matic, 31, will be a free agent next summer if he does not agree new terms at Old Trafford, and is therefore free to open talks with clubs outside England from January.

The Serbia international won two Premier League titles at Chelsea, including the 2016-17 championship under Antonio Conte, who is now in charge at Inter. Although Matic left Chelsea at the end of that season to join United, Corriere Dello Sport reports that Conte now wants to reunite with him in Italy.

11.50 BST: Tottenham have identified England youth international Nathan Ferguson as the player to solve their right-back problems, according to The Sun.

Ferguson, 19, has broken into the West Bromwich Albion first team this season and has started all but one of the Championship leaders’ 12 league games so far.

Spurs sold Kieran Trippier to Atletico Madrid in the summer but have struggled to cover for the England international’s departure. Mauricio Pochettino has tried fielding Serge Aurier, Kyle Walker-Peters, Davinson Sanchez and even Moussa Sissoko this season as he has alternated between a back four and using wing-backs but results continue to suffer.

The Sun reports that Ferguson, who is right-footed but has actually been playing at left-back for West Brom this season, is rated at around £10m.

The 19-year-old holding midfielder is able to speak to foreign clubs in January about a potential free transfer in the summer.

Belgium youth international Lokonga, who is also linked with Sevilla, could move in the winter transfer window for around €5m, according to Marca.

09.30 BST: Dani Ceballos has told Real Madrid president Florentino Perez that he wants to make his loan move to Arsenal permanent, according to El Desmarque.

Ceballos, 23, has impressed since joining the Gunners on a season-long loan in the summer, making 11 appearances thus far in all competitions.

The Spain international scored his first goal for the club earlier this month, in a 4-0 win over Standard Liege in the Europa League.

Ceballos’ loan deal does not have an option for a permanent transfer built into it and so, according to El Desmarque, he has taken his request to remain in London right to the top of hi parent club.

Manchester United are keen to sign Aston Villa midfielder John McGinn, according to the Express.

The Scotland international lit up the Championship last season and signed a new long-term deal in the summer amid speculation linking him with a move to Old Trafford.

McGinn has since enjoyed a bright start to life in the Premier League, netting on the road at both Arsenal and Tottenham which has reignited interest from the Red Devils, who have frequently struggled for both depth and creativity in midfield.

United manager Ole Gunnar Solskjaer is believed to see McGinn as the perfect solution to that problem, but any move may prove tricky with Villa boss Dean Smith insisting his prized asset is not for sale.

PSG have moved up a gear in their pursuit of AC Milan star Gianluigi Donnarumma, according to French paper L’Equipe.

The Italian giants look like they will be forced into parting with some of their biggest assets as they look to clear €146 million of debt, with PSG strongly tipped to be the frontrunners to land the highly-rated shot-stopper.

In a new development, Les Parisiens are believed to be prepared to offer a like-for-like replacement in a player-plus-cash deal that would see Alphonse Areola, currently on loan at Real Madrid, heading to the San Siro.

– LA Galaxy striker Zlatan Ibrahimovic has hinted at a possible return to Italy as the 38-year-old seeks a fresh challenge to keep his love of football alive, according to La Gazzetta dello Sport (via Marca). The towering Swede — who has already represented Juventus, AC Milan and Inter — has described the country as his “second home” and appears to have set his sights on a move to Napoli.

– Roma and Argentina midfielder Javier Pastore could be the latest player to be tempted by a move to China, Calciomercato are reporting. The former PSG man’s future in Italy has been questioned in recent months, and a host of Chinese clubs are believed to be considering a move for the five-time Ligue 1 winner’s services.