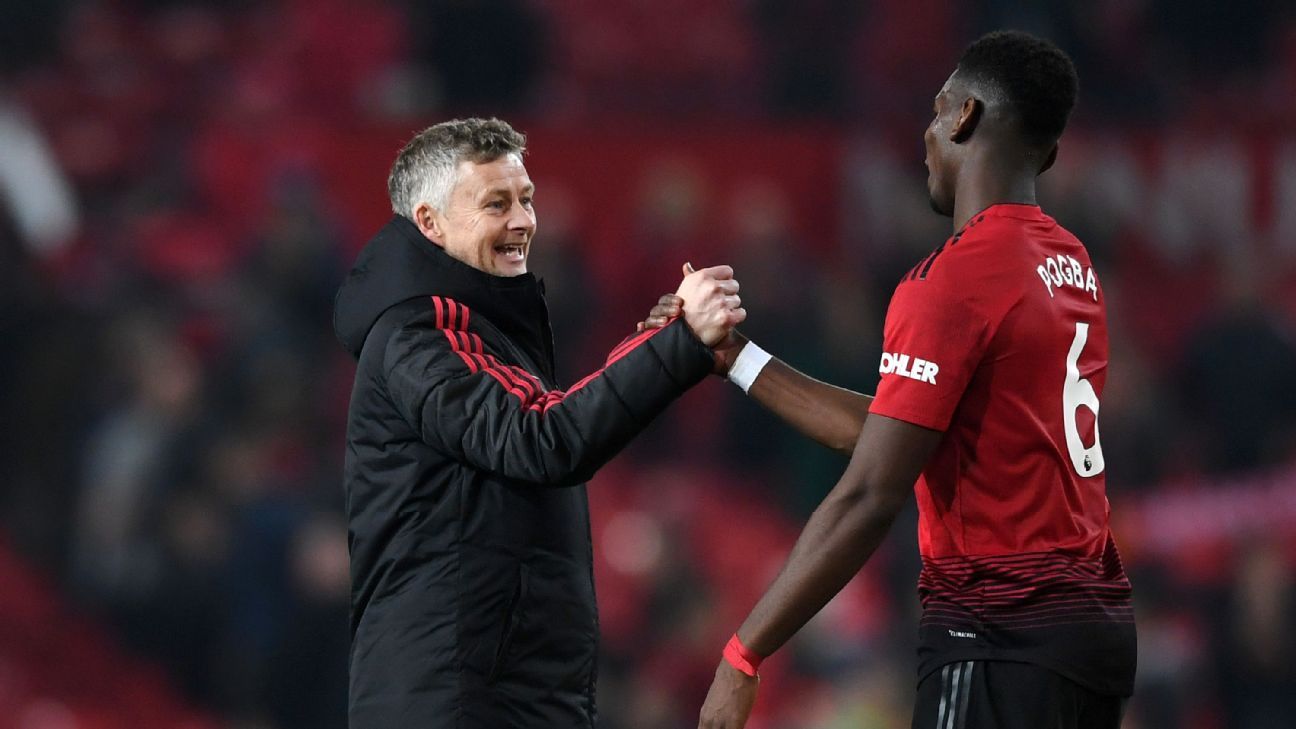 Manchester United’s excellent turn of form since Ole Gunnar Solskjaer took the helm has seen a change in fortunes for midfielder Paul Pogba, who is ready to commit his future to the club, according to The Sun.

After an indifferent start to the season that often saw him banished to the bench, Pogba has scored 11 goals and assisted eight more since Solskjaer took over from Mourinho in December.

A series of private talks held at the club’s training ground in Carrington have paved the way for a promising future, with an insider saying that Pogba told Solskjaer he has no intention of leaving the Red Devils.

11.37 GMT: Real Madrid have made the first signing of the new Zinedine Zidane era, after they agreed a deal for Porto defender Eder Militao.

The 21-year-old only joined Porto from Sao Paulo last summer for €4 million. Madrid have not disclosed a fee, but Marca reported this week that Militao has a €50m release clause and that would rise by 50 percent to €75m if a deal is not completed by July 15.

10.40 GMT: Jose Mourinho has said he is not disappointed after Zinedine Zidane was re-hired as Real Madrid manager, and described the Frenchman as “perfect” for the role.

Mourinho had said in January that being linked in the press with a return to former clubs Real Madrid and Inter Milan was a “tremendous honour.” However, he said he did not have any issue with Zidane being hired.

“No! Why would I be disappointed?” he replied, when asked the question on El Chiringuito TV. “I never said that I would or would not like to [return to coach Madrid.] I think it’s perfect, for me it’s perfect.”

“It’s a great opportunity for him to prove how good he is, now with a new project. I think it’s fantastic. I wish the club all the best.”

09.45 GMT: Rather than play down the reports linking Tanguy Ndombele with Paris Saint-Germain, Lyon president Jean-Michel Aulas seems rather taken with the idea.

Reports in France this week claim that the France midfielder’s agent, Jorge Mendes, is pushing for the 22-year-old to make the move to the Parce des Princes.

“There would be no problem selling a player to PSG,” Aulas told Le Revenu. “In fact, it would make me proud. If PSG want to buy Tanguy, that is not a problem. There is no unhealthy quarrel with the PSG hierarchy. [PSG chairman and CEO] Nasser Al-Khelaifi is a loyal and brilliant man, who I admire.”

The Brazilian defender, who only joined Porto last summer from Sao Paulo in a €4m transfer, has attracted the attention of top European clubs, including Real Madrid. Marca reports that the 20-year-old could become a Madrid player as early as next week, with the two clubs having reached an agreement for his transfer and the player keen to move to the Bernabeu.

Militao has a €50m release clause and that figure would rise by 50 percent to €75m if the negotiation is not completed by July 15. Militao’s former club Sao Paulo would receive 10 percent of the player’s future transfer.

08.00 GMT: Barcelona playmaker Philippe Coutinho says he is not thinking about the future amidst reports he is seeking a return to the Premier League after a disappointing 14 months at the Camp Nou.

Coutinho has made 16 league starts for Barca this season and has not had the impact many expected since his €120m move from Liverpool in January 2018.

“I’m not playing as much as I would like in recent weeks and in the last few months,” Coutinho, who scored Barcelona’s second goal in their 5-1 win over Lyon on Wednesday, told Cadena Cope after the game. “I came here to give the best of me. I live in the moment and this is the moment, we can’t think about the future.”

Eden Hazard will be staying at Stamford Bridge this summer, should his teammates and manager get their wish, despite longstanding interest from Real Madrid.

In a news conference ahead of the Blues’ Europa League game this week, Chelsea boss Maurizio Sarri insisted that he hasn’t spoken to Real Madrid or new boss Zinedine Zidane, and re-iterated that he’s not worried about the situation.

Meanwhile, the Mail reports that teammate Willian says that Hazard has “never said something about Real Madrid. … He just wants to continue to play for Chelsea.”

Manchester United could be set to capitalise on Toby Alderweireld‘s low price tag, as the Spurs defender continues to reject a new contract at Tottenham.

Thanks to a counter-clause in his contract that was triggered in January, Alderweireld could leave the club for as low as £26 million within the final two weeks of this summer’s transfer window, The Mirror understands.

European giants Juventus and Barcelona are also understood to be interested in the centre-back. But United, who will be listening to offers for the out-of-favour Eric Bailly, are the front runners in this deal.

With just one year remaining on his contract from this summer, Tottenham will be forced to sell Alderweireld should the offer come in.

Mum’s the word at City

Elsewhere in Manchester, City are struggling to get Leroy Sane to commit to a contract extension because his mother is obstructing talks.

The Mail suggests that the club have been attempting to tie down Sane to a longer deal since last summer, but that his mother, Regina Weber, West Germany’s 1984 Olympic gymnastics bronze medalist, has proved obstructive.

Sane has made 25 appearances this season but has been in and out of Pep Guardiola’s side in the last few months. Still, he has described City as “home,” which suggests he would be happy to extend his stay at the Etihad.

Bernardo Silva became the 11th player to extend his contract at the club since January 2018 after the likes of Raheem Sterling, Ederson and Aymeric Laporte, but it looks as though City will have to wait before Sane joins the list.

– AC Milan are leading the race for the signature of Argentinian midfielder Juan Sebastian Sforza, as they were the first side to show interest in the 17-year-old. Sforza’s agent is also set to meet with Roma, Inter Milan, Juventus and Napoli in the coming weeks, but Bayern Munich, Paris Saint-Germain and Manchester United are all thought to be interested too, according to Calciomercato.

– Napoli forward Lorenzo Insigne is strictly not for sale, despite interest from Liverpool and Manchester City, as per Calciomercato. Napoli president Aurelio De Laurentiis said “he is not on the market, I have not registered interest in Insigne. He does not have a price, otherwise we would have put a release clause in his contract.”

Leicester’s Kelechi Iheanacho shows he’s ready to lead the attack after sending Foxes to FA Cup final
Social media reacts to Tottenham firing Jose
Man City, Real Madrid the teams to beat? Bad luck for Bayern Munich?
Super League is only wanted by a cabal of Europe’s elite club owners. Fans have been forgotten
For Erling Haaland and others, transfer decisions are about risk calculation