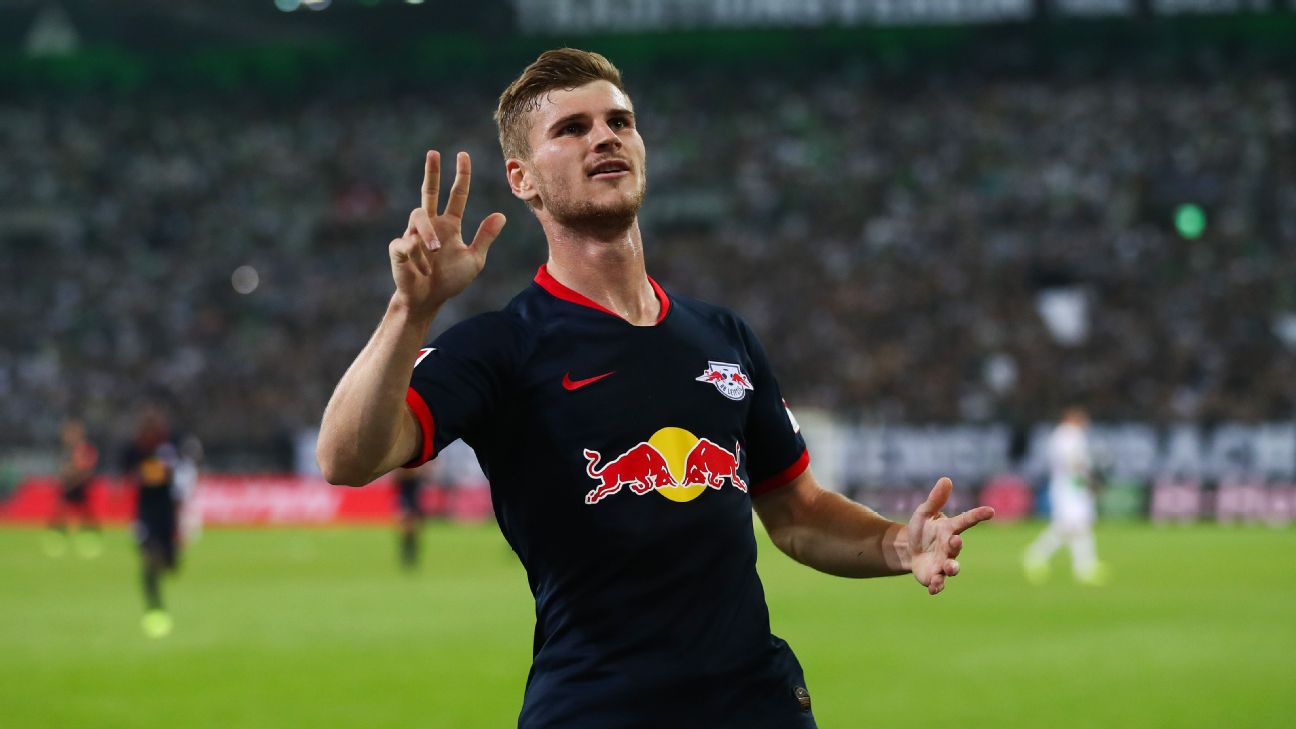 Manchester United need a striker and could be set to beat Liverpool to the punch for RB Leipzig’s Timo Werner, says the Daily Express.

Werner, 23, is a long-time Liverpool target, with 68 goals in 124 appearances for his German club in three years, but he would be second-choice to Roberto Firmino if he landed at Anfield.

The report states that United are in the running now as a move for Juventus star Mario Mandzukic is deemed too short term. Werner wouldn’t be allowed to move in January but a summer deal could be on the cards and, although he doesn’t fit the ‘young and British’ mantra of United’s transfer policy, ‘young and German’ could be the way forward.

As one of Europe’s hottest young strikers, many clubs should be on the trail of Werner after he signed a new contract recently with a reported buyout clause of €30m.

18.47 BST: Real Madrid won’t make any signings in January until they can sell, with Mariano Diaz, Brahim Diaz and Isco the most likely to leave the Spanish capital, according to AS. While Los Blancos are uncertain Mariano and Brahim will accept a move away, the report states that Isco is preparing for a move to the Premier League, with Manchester City and Arsenal reportedly interested in the 27-year-old playmaker.

17.00 BST: Atletico Madrid full-back Kieran Trippier made the shock move from Tottenham this summer and has been speaking to Marca about the experience.

“As a footballer, you know when you need to move,” he said. “It was a good decision for me. It was easy to come to Atletico. I think this is the best place to progress as a footballer, with the best manager [Diego Simeone] to play with and learn from.”

Oyarzabal, 22, has been on the radar for some time but City will move for him once Leroy Sane‘s £100m move to Bayern Munich is sanctioned, assuming the German recovers well from his cruciate knee injury.

Paris Saint-Germain and Borussia Dortmund are also looking at a move for Oyarzabal, whose release clause is around €75m, but City are in pole position.

14.28 BST: Leicester midfielder James Maddison is clearly a key part of Manchester United’s transfer plans and David Ornstein reports that the club believe they will be able to pull off a deal within the next year.

Maddison, 22, is attracting a great deal of interest with his displays and fits the new United model by being both young and English.

Liverpool, Tottenham and Man City are also keen, but the report states that United are confident their relationship with Leicester (and the fact they handed over £80m for defender Harry Maguire this summer) will go some way to putting them at the front of the queue.

Kane himself said on Monday: “It’s probably the toughest time since I’ve been here. It’s just another challenge though. The road to success will always have bumps and this is just one of them.”

12.49 BST: Arsenal defender David Luiz has revealed some interesting things to the Telegraph about his £8m summer transfer from Chelsea.

“Me and [Frank] Lampard, we had honest conversations. Man to man, me and him. His ideas of football were different to mine. We just agreed: ‘OK, we move on’. In an honest way, in a mature way. We played together, we won together. We won the Champions League, the Europa League, everything together. It was done in a mature way.”

“I’ve put in a lot of hard work on and off the pitch to get to this position,” Ramsdale told afcbTV. “It’s been a relatively short space of time but I’ve have had two good, different loan spells and am now seeing the benefits of that hard work in the Premier League each week.”

11.31 BST: Manchester United midfielder Angel Gomes has been attracting the interest of Barcelona and the Sun claims that the club want to hand the 19-year-old Englishman a new contract.

10.37 BST: Claude Makelele knows a thing or two about succeeding at Chelsea and the former midfielder-turned-scout has recommended Atalanta and Ukraine star Ruslan Malinovskyi to the club, according to the Express.

Malinovskyi, 26, has impressed in Serie A this season, having moved to Italy this summer from Genk. Now, when Chelsea’s transfer ban is lifted, the midfielder could be on the way to London.

Harit, 22, has had a torrid 18 months after being involved in a fatal car crash, but has found his form again under new Schalke manager David Wagner and that has caught the eye of scouts at Camp Nou.

09.22 BST: Nigeria striker Victor Osimhen has appeared on the radar of struggling Newcastle, according to the Chronicle.

Osimhen, 20, had been previously linked to Everton and Arsenal before making a move to Lille this summer. But his eight goals in 11 appearances have reportedly caught the eye of Newcastle’s scouts.

08.42 BST: Olivier Giroud’s Chelsea future will be discussed in January — with Crystal Palace interested, according to TEAMtalk — after the France striker revealed he was keen for more game time.

Giroud, 33, has impressed for France on international duty but has made only one Premier League start this season, and has had to watch Tammy Abraham take his spot in the side.

“I had a good chat with Oli before he went away [on international duty] and I always respect all the players, but particularly the players of that age of low thirties,” manager Frank Lampard said. “I love his professionalism. He was bang on when he spoke to me and with his quotes when he was away with France. He shouldn’t be happy and accept not playing. That’s what good players do. I think, as I said to Oli, he will get his games and be a big influence for us.

“At the moment, because of how Tammy is playing, there hasn’t been the minutes, so I would happily sit down with Oli in January. But that is a long way away. I want him here.”

08.00 BST: We all know that Borussia Dortmund winger Jadon Sancho is a man in demand, but now he’s REALLY in demand as Real Madrid have entered the race, according to Eldesmarque.

Not content with spending over €100m on Eden Hazard this summer, Real are in the market for a new forward and Sancho fits the bill.

The list of clubs waiting to get their hands on Zlatan Ibrahimovic is becoming an increasingly lengthy one, with Napoli the latest side to throw their name into the hat.

Ibrahimovic has hinted that the LA Galaxy’s MLS playoff against Minnesota United on Sunday could be his last game — perhaps just for his club in the U.S., but maybe for his entire career.

But AS reports that Carlo Ancelotti would still be more than keen on ensuring that his retirement is put off for a good while longer.

In a recent interview with Gazzetta Dello Sport, Ibrahimovic revealed that he wouldn’t turn his nose up at a return to Serie A — a league in which he has enjoyed huge success in the past. “I’m not a zoo animal to be put on display for people to see. I can still get 20 goals in Serie A,” said the Swede in his typically understated manner.

And after Napoli’s win against Verona on Saturday, Ancelotti appeared enthusiastic about Ibrahimovic finishing his career in Naples.

“Ibrahimovic? I will call him tonight and tell him that we are waiting for him here,” said the former Chelsea gaffer. “I follow him a lot. In 29 games in the MLS he scored 30 goals.”

A similar kind of return would be a big ask in the Italian top flight. But if we’ve learned anything over the years, it’s that Ibrahimovic has endless capacity to surprise.

Manchester United will be keeping tabs on Edinson Cavani‘s contract situation after Le Parisien revealed that Thomas Tuchel has told the club that he doesn’t want Paris Saint-Germain to offer a new deal to the Uruguayan.

Decision-makers at Old Trafford and Inter Milan are keeping tabs on Cavani after he has struggled to get any kind of game time in the French capital so far this season. Cavani has played only three Ligue 1 games so far this season — although some of that was due to injury — but he did score a couple of goals in the fleeting time he was on the pitch.

The 32-year-old has also banged in a couple of goals in the Coupe de France, but by and large has been a peripheral presence at the club he has graced with distinction since 2013. His contract is up next summer and he’s unlikely to be short of suitors as it runs down.

Cavani has been linked with countless moves away from the Ligue 1 giants, with almost constant speculation linking him with a switch to the Premier League. Now that the end appears to be nigh, that speculation might morph into something far more concrete.

– Borussia Dortmund are lining up a bid for AC Milan’s Ricardo Rodriguez. That’s what Sky in Germany (via Calciomercato) are reporting today, with Dortmund apparently preparing a move for the Switzerland defender when the January transfer window opens. Rodriguez arrived at the San Siro in 2017 for €15 million but has come in for some criticism in recent weeks, as Milan have struggled to get up and running in Serie A so far this season.

– Manchester United and Arsenal target Thomas Meunier is apparently keen on earning a new contract at PSG as the clock ticks down on his current deal with the Ligue 1 side. Calciomercato says that Meunier wants to stay at the club, despite rumours linking him with a switch to the Premier League or Serie A side Juventus.