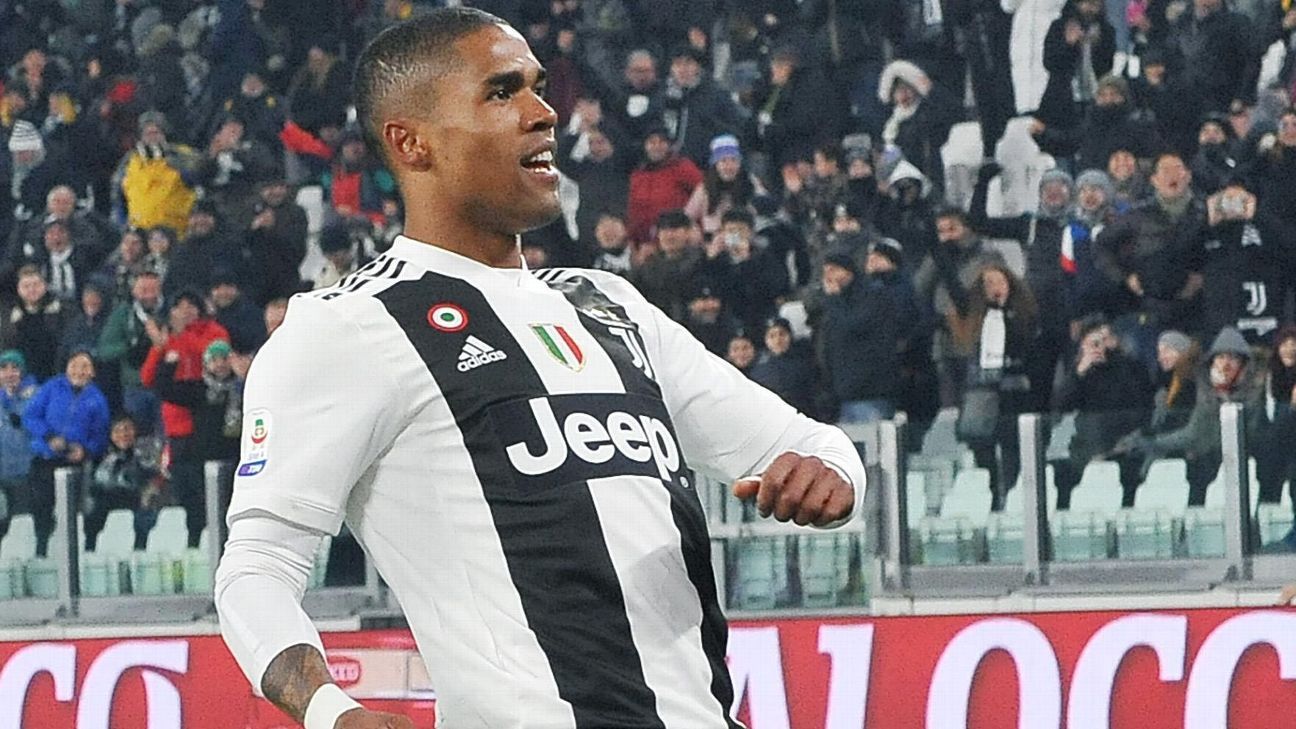 Manchester United have long been linked with a move for Borussia Dortmund winger Jadon Sancho. In fact, Aug. 10 is reportedly the deadline day in that regard, with the 20-year-old travelling to Dortmund’s training camp in Switzerland, meaning he likely won’t be joining United this summer in a €120 million deal.

Sources have told ESPN’s Rob Dawson that United will not be rushed by the Aug. 10 deadline imposed by Dortmund for an agreement to be reached. However, United still need some depth on the wings so Tuttosport reports they are keen to sign Juventus‘ Douglas Costa if they can’t land Sancho. The Brazilian started only six league games all season as the Old Lady won the Scudetto and is keen to move for regular football.

Juve sacked manager Maurizio Sarri and replaced him with Andrea Pirlo this weekend, having failed to progress in the Champions League, and Costa could be allowed to leave as Pirlo plans a rejuvenation of the squad, with midfielders Blaise Matuidi and Sami Khedira also set to depart.

Costa joined Juve from Bayern Munich in 2017 on loan, then signed for €40m the following summer. Though, at 29, he won’t command the same fee now.

11.16 BST: Chelsea have made moves in attack with Timo Werner and Hakim Ziyech, plus a potential deal for Kai Havertz, but it’s in defence where they need a top player.

Ian Darke says Chelsea are looking to spend “a whole lot of money” during the transfer window.

10.50 BST: Bournemouth midfielder David Brooks has a number of clubs interested in him, says the Daily Star.

Brooks, 23, is likely to leave Bournemouth after they were relegated and the Wales midfielder has drawn attention from Liverpool, Everton, Tottenham and West Ham.

Bournemouth are looking for around £35m for the midfielder, with Liverpool reportedly most interested as they seek replacements for Xherdan Shaqiri and Adam Lallana.

10.24 BST: Tottenham are set to make their first move in the transfer market this summer as Southampton midfielder Pierre-Emile Hojbjerg will have a medical on Monday, says Sky Sports.

Hojbjerg will cost £15m, plus add-ons, while Spurs full-back Kyle Walker-Peters is heading to the south coast to make his loan deal permanent for around £12m.

09.57 BST: Newly promoted Bundesliga side Arminia Bielefeld are among a host of clubs chasing Chelsea youngster Conor Gallagher, according to kicker.

The 20-year-old midfielder spent the 2019-20 season on loan with Charlton and Swansea, making a total of 48 competitive appearances for the two Championship clubs. And those performances have now brought Gallagher to the attention of Arminia Bielefeld, the German side who will play their first Bundesliga campaign since the 2008-2009 season.

The Inter Milan forward is a target of Barca but his release clause of €111m expired last month. And talks between Inter and Barca regarding Martinez’s potential arrival to Camp Nou have been put on hold until the end of the season.

“The Lautaro transfer is more a media thing,” Yaque said. “Lautaro has three years left on his contract with Inter and is very happy where he is.

Ale Moreno dissects why it’s Lionel Messi or bust for Barcelona in nearly every match they play.

Tsimikas, 24, has yet to agree personal terms but Liverpool are confident of landing the Greece international, who would play as a backup to first-choice Andy Robertson.

08.59 BST: Benfica coach Jorge Jesus says his club is doing all it can to sign highly-coveted forward Edinson Cavani.

Cavani’s contract with Paris Saint-Germain, who face Atalanta in the Champions League quarterfinals on Wednesday, expires this summer and the 33-year-old is a target of many clubs.

Record reported that Benfica have offered the Uruguay international a three-year contract but there is no agreement yet regarding personal terms.

“Cavani is a player that has various offers on the market and he is thinking about his options,” Jesus, hired last month from Brazilian giants Flamengo, told reporters. “If you ask me do I want him? Who wouldn’t want him? Not just for Benfica but for Portuguese football. We know it’s not easy financially. The president is doing all they can for it to happen.”

08.27 BST: RB Leipzig defender Dayot Upamecano, a Bayern Munich and Arsenal target, has a €42m release clause in his new contract, according to kicker.

In late July, the Bundesliga side managed to tie the 21-year-old centre-back to a new deal to avoid losing him on a free transfer in 2021, when his old contract was set to expire.

Like the arrangement Leipzig had with Timo Werner, who joined Chelsea this summer, Leipzig and Upamecano agreed on a release clause which can be triggered next year.

German magazine kicker on Monday reported that clubs willing to sign the France under-21 international next summer will have to pay €42m for Upamecano, whose release clause was at €60m before the new deal was signed.

08.00 BST: Willian will end his seven-year spell at Chelsea this summer, the player announced on social media on Sunday.

The Brazil international had been in talks over a new contract at Stamford Bridge but negotiations broke down over the length of his deal.

Sources have told ESPN’s Tom Hamilton that the 32-year-old has agreed a three-year deal at Arsenal worth around £100,000-a-week.

Pedro also confirmed his exit from Chelsea after four years at the club. The winger is set to join AS Roma on a free transfer this summer.

Between the two of them, Willian and Pedro won three Premier League titles, the Europa League, the FA Cup and the League Cup during his time at Chelsea.

Manchester City defender Nicolas Otamendi could be a step closer to leaving the Etihad Stadium, with reports in the Sun claiming City officials are set to reduce the centre-back’s asking price to just £8m.

The £41m acquisition of Nathan Ake from AFC Bournemouth means City boss Pep Guardiola has his left-sided central defensive options covered, and despite featuring 39 times for the Premier League runners-up last season, Guardiola and his coaching team have decided that the Argentine’s time in Manchester is up.

Napoli had previously been quoted £15m for the 32-year-old, but look set to return to the negotiating table following the latest development, while Valencia are also keeping tabs on the player they sold to City for more than £30m in 2015.

The 23-year-old enjoyed a successful season-long loan at Sevilla FC, but despite his impressive temporary spell away from the Bernabeu, Real boss Zinedine Zidane is keen to offload the Spaniard and use the funds to invest in his squad.

There is also reported to be interest in the Spain Under-21 international from Chelsea, with Blues manager Frank Lampard keen to improve his options at left-back after growing increasingly unconvinced by the credentials of Marcos Alonso and Emerson — the latter being linked with a move to Serie A.

The asking price for Reguilon is in excess of £18m, which represents a cheaper option for Chelsea than Leicester City defender Ben Chilwell, who has been linked with a move to Stamford Bridge for more than £50m.

Serie A side Lazio are preparing for life back in the Champions League next season, and Gazzetta dello Sport claims Le Aquile are preparing a swoop for Fenerbahce forward Vedat Muriqi.

The Italian publication believes Simone Inzaghi’s side are hoping to take advantage of financial troubles at the Turkish giants to land the 26-year-old for a cut-price of €20m.

Fenerbahce chairman Ali Koc recently announced further plans to reduce the budget at the club, as they look to clear huge bank debts, and Kosovo international Muriqi represents a chance to significantly shrink their salary outgoings, as well as their financial arrears.

Meanwhile, Lazio are also keeping a close eye on Hellas Verona defender Marash Kumbulla, with the 20-year-old receiving rave reviews for his performances in the Italian top flight this season.

– Sheffield United look set to beat West Bromwich Albion to the signing of Wigan Athletic defender Antonee Robinson, according to the Sun. The United States international is available for a bargain £1.5m following the Latics’ relegation to League One.

– AC Milan defender Ricardo Rodriguez looks set to leave the San Siro in the close season, and Calciomercato claims the Switzerland international could be set for a move to the Rossoneri‘s Serie A rivals Torino. The 27-year-old made just five appearances for Milan this season, and also spent time out on loan at PSV Eindhoven.