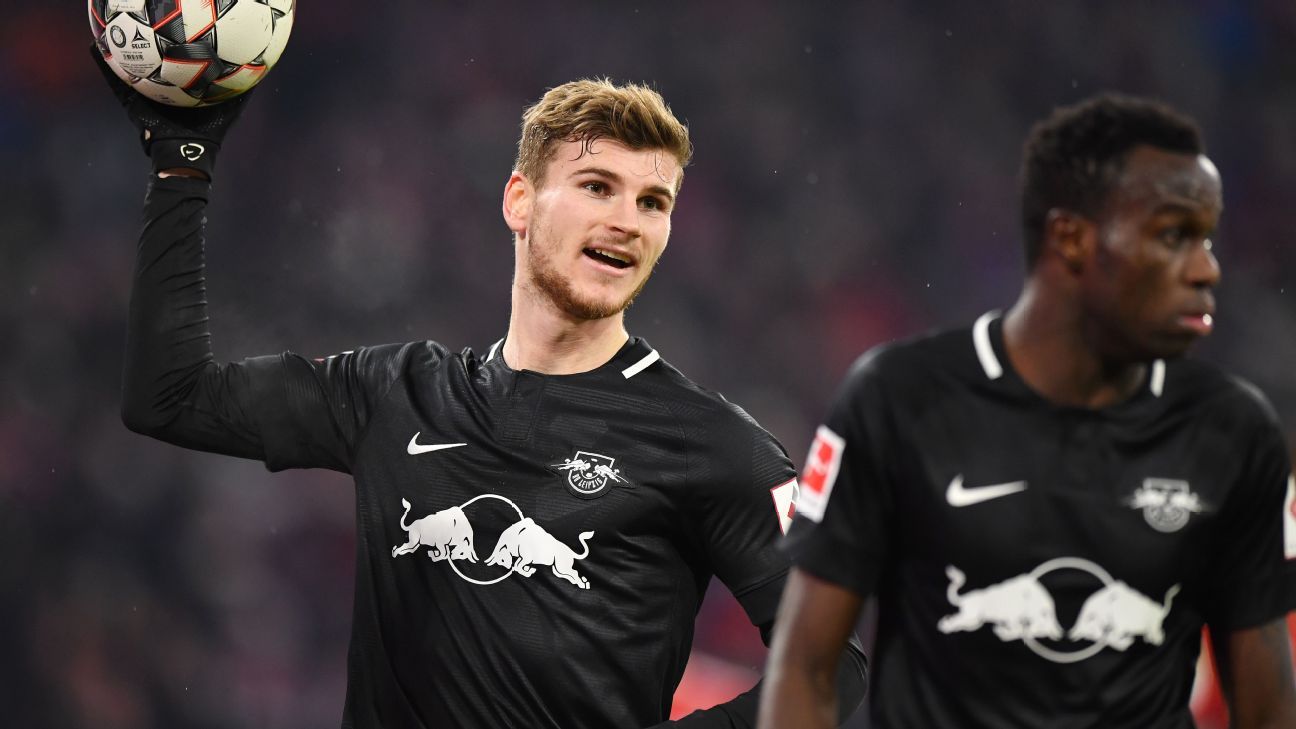 The two European giants are to go head-to-head in the Champions League when it returns in February but, according to German publication Abendzeitung, the clubs could face off in January as they look to win the race to sign Timo Werner.

The RB Leipzig forward has caught the eye ever since his move to the Red Bull Arena, with Ralph Hasenhuttl deploying him as a striker, a subtle tweak from his days as a wide forward for VfB Stuttgart. He responded with goals, 44 in 78 Bundesliga games since the move, and he’s now the No. 9 for Germany.

The 22-year-old has just 18 months remaining on his current deal and Europe’s elite are keeping close tabs. Bayern Munich are believed to see him as the heir to Robert Lewandowski while Liverpool are keen to add the versatile forward to their attacking ranks as they look to compete on multiple fronts.

09.00 GMT: Pascal Gross has been impressing for Brighton in the past year or so but he’s not interested in a move to Liverpool or Southampton, according to the Argus.

It was recently reported that Monaco had joined AC Milan and Valencia in the hunt to sign Cesc Fabregas, but Calciomercato claim the 2016-17 Ligue 1 champions aren’t the only team interested in the Chelsea playmaker.

According to the report, Paris Saint-Germain are interested in the former Arsenal man as they look to bring in a high-quality replacement for Adrien Rabiot, with the French midfielder edging closer to a move to Barcelona.

Watford’s Abdoulaye Doucoure is another name linked with the Ligue 1 leaders but Fabregas’ European pedigree sees him top Antero Henrique’s list of transfer targets. The Chelsea No. 4 has found minutes hard to come by this season with Jorginho the man entrusted by Maurizio Sarri to dictate the tempo for the Blues.

A sensational star to the season has seen many of Europe’s elite keeping close tabs on Jadon Sancho. The 18-year-old scored his sixth Bundesliga goal of the season in Borussia Dortmund’s 2-1 win over Borussia Mochengladbach on Friday to extend their lead at the top to nine points.

Including assists, he’s been involved in a goal every 78 minutes this season and his spectacular form hasn’t gone unnoticed. Manchester City are believed to be interested in bringing Sancho back to the Etihad but, according to reports in Marca, it’s Real Madrid who have taken a serious interest in the wonderkid.

The European champions are monitoring the situation and, according to the report, maintain a close relationship with the German club which could be leveraged to jump ahead of other potential suitors. A fee in the region of £100 million is being mooted.

Speaking at a sponsorship event in Bogota, James Rodriguez has revealed that he might have to leave Bayern Munich in search of regular first-team football.

“I do not play that much under the new coach. If I have to leave because I do not play, I’ll leave,” he said.

The Colombian megastar did however claim that he had “no problem” with manager Niko Kovac.

Rodriguez, on loan from Real Madrid, has appeared in just 472 minutes in the Bundesliga this season and finds himself behind Serge Gnabry and Kinglsey Coman in the pecking for the Bavarian giants. Despite not being afforded many minutes on the pitch, the Colombian creator has three goals to his name as he looks to make the most of his time playing for the Bundesliga champions.

The La Liga leaders want to bolster their defensive ranks with both Samuel Umtiti and Thomas Vermaelen ruled out with injuries. The Chelsea centre-back has just 90 minutes of Premier League action to his name this season and is believed to want more game time. Manager Maurizio Sarri wants to keep the 22-year-old and is willing to allow Gary Cahill to leave, a move which would increase the likelihood of the Denmark international playing.

A one-time Manchester United transfer target, Milinkovic-Savic could be set for a big money move to AC Milan in January. If reports are to be believed, the Serbian powerhouse almost made the move to the San Siro in the summer window but a deal couldn’t be agreed in time. Calciomercato claim a €70m deal has already been agreed.

The Serie A side are in the market for an Aleksander Kolarov replacement and the Crystal Palace left-back tops their wishlist. Van Aanholt has been a consistent performer since his move to Selhurst Park in January 2017 and could be available for £25m if reports are to be believed.

With the Frenkie de Jong talk seemingly taking a backseat over recent days, Ligue 1 leaders PSG have rekindled their interest in Borussia Dortmund’s midfield maestro Julian Weigl. With Rabiot reportedly close to agreeing to a deal with Barcelona, the Parisian side are eager to sign midfield reinforcements during the winter window.

Rangers are battling it out with Crystal Palace to sign Liverpool forward Solanke on loan. Recent reports have suggested the Reds are open to letting the former Chelsea youngster leave in January in order for the 21-year-old to get the minutes he needs to develop.

Will Mane, Sterling, Ronaldo follow Salah as next player to join Premier League’s 100 Club?
Chelsea’s Thomas Tuchel on Harry Kane to Man City saga I expected him to leave
FIFA row has done ‘irreversible damage’ to clubs
Man Utd have inside track for Dortmund’s Jude Bellingham
Real Madrid’s Marco Asensio gets 9/10 for hat trick in thrashing of Mallorca