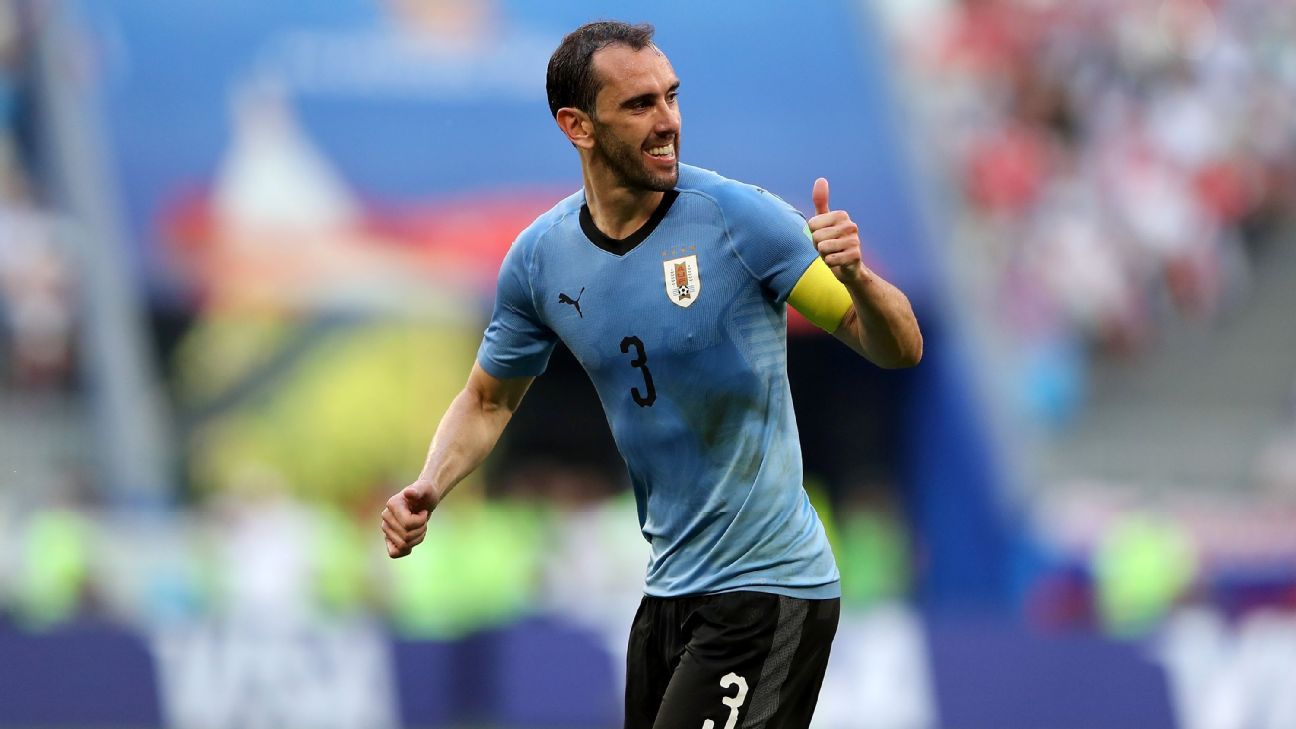 Juventus have confirmed the arrival of Cristiano Ronaldo in one of the deals of this or any summer, but their transfer business is not finished there, Tuttosport reports.

It says the Italian champions will now turn their attention to a revamp of their defence, with Atletico Madrid’s Uruguay international defender Diego Godin high on their list.

Godin, 32, is out of contract next year, but although Atleti are in talks about a new deal Tuttosport says Juve are making his arrival a priority.

If their attempts to land Godin fail, they could turn their attentions to either his Atletico teammate Stefan Savic or Arsenal’s Shkodran Mustafi.

22.02 BST: That’s going to bring Wednesday’s live edition of Transfer Talk to a close. Thanks very much for joining us, and be sure to check back in a few short hours when we return with the latest gossip pulled from Thursday’s back pages.

19.51 BST: Nice midfielder Jean Michael Seri has been linked with Barcelona, Arsenal and Chelsea — among others — in the past 12 months, but it’s Fulham who seem set to sign the Ivory Coast international. The Mirror reports that the newly promoted West London club have agreed to pay the 26-year-old’s £35 million buyout clause, and expect to conclude his transfer by the weekend.

18.15 BST: With Jorginho looking increasingly likely to swap Napoli for Chelsea, Carlo Ancelotti’s side will be in the market for a midfielder, and the Express cites Italian outlet La Repubblica as reporting that Cesc Fabregas could be moving in the opposite direction.

17.48 BST: While West Ham have held talks with former Manchester City and Barcelona midfielder Yaya Toure, the East London club have decided against offering the 35-year-old a contract because he has “too much baggage,” following his repeated fallouts at the Etihad, the Sun reports.

17:21 BST: Juventus have rejected a €40 million offer from PSG for Alex Sandro, according to TuttoMercatoWeb.

17:13 BST: Simone Zaza could join Torino as part of a three-way striker domino effect, according to Tuttosport. If Marseille sign Mario Balotelli from Nice, they will then turn their attentions to M’Baye Niang – with Torino then moving for Zaza.

16:59 BST: West Ham’s joint-chairman David Sullivan says the club are looking to add to their five summer signings so far.

He said: “As a board, we assured our supporters that we would be looking to bring in high-calibre players, and Jack [Wilshere] and Andriy [Yarmolenko] fit that bill perfectly.

“Both of them have played at the highest level and we look forward to seeing that quality on show on a regular basis in the Claret & Blue.

“We also hope to have more exciting news regarding incomings in the near future as we aim to provide Manuel with the strongest squad possible.”

16:42 BST: Antonio Cassano is considering coming out of retirement once again and is in talks with one his former clubs in Parma

“A lot of teams are interested in Yerry, but first we want to know what the club’s intentions are with him. When we know, we will decide.

“His priority is to play, so if he cannot do that at Barca, he will do it for another team. But first we want to know the club’s plans with him.”

16:04 BST: Chelsea are set to hand highly-rated midfielder Mason Mount a new deal before sending him on loan to Derby – sources close to the club.

15:29 BST: Ethan Hamilton is the latest youngster to commit his future to Manchester United.

#MUFC U23s midfielder @EthanHamilton98 becomes the latest young Red to commit his future to the club! 🔴

15:16 BST: Atletico Madrid’s multi-functional Thomas Partey has told ESPN he is open to moving to the Premier League.

14:56 BST: Borussia Dortmund have completed the signing of Achraf Hakimi from Real Madrid on a two-year deal — read about it here.

14:34 BST: Eder has agreed to join Jiangsu Suning from Inter Milan for €5 million — the Italian striker will earn €27m over two and a half years in China, according to Fabrizio Romano.

14:16 BST: Manchester City have not yet given up on a move for Napoli midfielder Jorginho, sources have told ESPN FC.

Napoli chairman Aurelio De Laurentiis claimed the Italian international was set to complete a move to Premier League rivals Chelsea and footage of Jorginho getting ready to board a plane to London circulated on social media on Wednesday morning.

However, ESPN FC has been told that City are still pursuing a deal and have not been told that Jorginho would prefer a move to London as De Laurentiis claimed.

14:01 BST: Juventus present the signing everyone has been waiting for… yes, Mattia Perin was shown off in front of the media after joining from Genoa.

In all seriousness, Perin is one Italy’s most highly-rated goalkeepers and will provide sound competition for Wojciech Szczesny.

13:45 BST: Barcelona centre-back Marlon Santos is on his way to Southampton in a €12 million deal, according to Sport.

13:30 BST: These are busy – and exciting – days for West Ham, with the Mail reporting that they “have applied for a work permit for Felipe Anderson as they prepare to smash their transfer record in a deal worth in the region of £40 million for the Lazio winger.”

13:05 BST: After Cristiano Ronaldo‘s move to Juventus from Real Madrid, we look at how Spanish media reacted to end of era.

12:55 BST: More on Barcelona and Adrien Rabiot now — Sport reports that Barca have an agreement with Rabiot over a deal worth around €7m-a-year but still need to negotiate a fee with PSG, who are willing to listen to offers.

12:45 BST: Liverpool have opened talks with Stoke City over a potential transfer for Xherdan Shaqiri, a source has confirmed to ESPN FC.

Liverpool began monitoring Shaqiri earlier in the summer and they are now holding discussions with Stoke about a move for the 26-year-old.

12:30 BST: Plenty of developments in the offing at Chelsea — they are close to completing a €65 million (£57.5m) combined deal to appoint Maurizio Sarri as their new head coach and sign Italy international midfielder Jorginho, Napoli president Aurelio De Laurentiis has said.

12:10 BST — DONE DEAL: West Ham have confirmed the signing of Ukraine winger Andriy Yarmolenko from Borussia Dortmund. Yarmolenko, who has signed a four-year contract, moves for an undisclosed fee.

11:50 BST: Jorginho dramarama — after reports that Chelsea could beat Manchester City to his signature, the Mirror reports that the Napoli midfielder “has flown to London, heightening City’s fears that he will snub them.”

It says incoming Chelsea coach Maurizio Sarri has “told Chelsea to hijack the transfer because he wants to be reunited with the Italy international at Stamford Bridge.”

11:35 BST — DONE DEAL: Arsenal have signed France under-20 midfielder Matteo Guendouzi from Lorient in a deal reportedly worth £7 million.

Arsenal announced the signing on Wednesday, with Guendouzi, 19, reported to have signed a four-year deal.

11:30 BST: Arsenal goalkeeper David Ospina’s agent has said a move to Boca Juniors is unlikely, with the Colombia international looking to stay in Europe if he leaves.

11:15 BST: Rangers manager Steven Gerrard has made a £3 million bid for Millwall central defender Jake Cooper, according to Sky Sports, which adds that the Championship side want to keep him.

11:00 BST: Defender Yerry Mina‘s agent has told Mundo Deportivo that speculation his client is heading for Everton is off target.

“It’s not true that Yerry has signed for Everton,” Jaïr Mina said. “There are many teams interested in Yerry, but first we want to know what the Barcelona plans are with him. When we know, we will make a decision.”

10:45 BST: Cristiano Ronaldo‘s exit has no bearing on Gareth Bale‘s future at Real Madrid, with talks still required with the Bernabeu hierarchy, the Wales international’s agent has told ESPN FC.

10:30 BST: Nice have not received any offers for striker Mario Balotelli as he continues to push for a move away from the club, president Jean-Pierre Rivere has said.

10:00 BST: Borussia Monchengladbach are set to sign Nice forward Alassane Plea in a €23m transfer, according to reports in Germany.

09:15 BST: Guingamp midfielder Moustapha Diallo, out of contract at the club, is expected to sign a two-year deal with newly promoted Nimes, L’Equipe reports.

08:45 BST: Sassuolo defender Francesco Acerbi has arrived in Rome to undergo a medical ahead of a move to Lazio, saying he has already given coach Simone Inzaghi his word that he will join them.

08:15 BST: The biggest news, of course, is Cristiano Ronaldo‘s move from Real Madrid to Juventus. Find out not only what happened, but get the inside information on the transfer from ESPN FC’s Gabriele Marcotti.

Chelsea defender David Luiz is on his way out of Stamford Bridge as the Blues prepare to finalise a £35 million move for Juventus defender Daniele Rugani, according to the Mirror.

Amid ongoing uncertainty over the club’s managerial situation, “the move for the 23-year-old is understood to have been at the behest of incoming coach Maurizio Sarri.”

Former Chelsea boss Carlo Ancelotti is set to bring Luiz to Napoli, the Mirror says, and wants to “offer the Brazil international a lifeline in Serie A” after he lost his place in the Chelsea team.

Luiz, reported to be “surplus to requirements,” could be joined at Napoli by West Ham’s Angelo Ogbonna, who is also in Ancelotti’s sights.

Everton and Borussia Dortmund have joined the race for Crystal Palace winger Wilfried Zaha, but the London Evening Standard reports that they are set to be disappointed.

It says the Londoners “are adamant that they will not sell Zaha,” who they value at £70 million and are keen to persuade to sign a new deal.

The Standard says that although Dortmund are set to sell Andriy Yarmolenko to West Ham, “they would still need to raise further finance for a player valued so highly by Palace.”

— David Ospina could be on his way to Argentina, with Boca Juniors interested in making a move for Arsenal’s £6 million-rated Colombia international goalkeeper.

The Mirror reports that the Gunners are willing to let Ospina, who has two years left on his contract at the Emirates Stadium, leave following the arrival of Bernd Leno.

— West Bromwich Albion are set to scupper Leeds United’s hopes of making a permanent move for their former loan player Kyle Bartley, according to the Yorkshire Evening Post.

Swansea defender Bartley has emerged as a target for West Brom as they rebuild following relegation to the Championship, and the Baggies “want to talk the Swans into a deal as quickly as possible.”