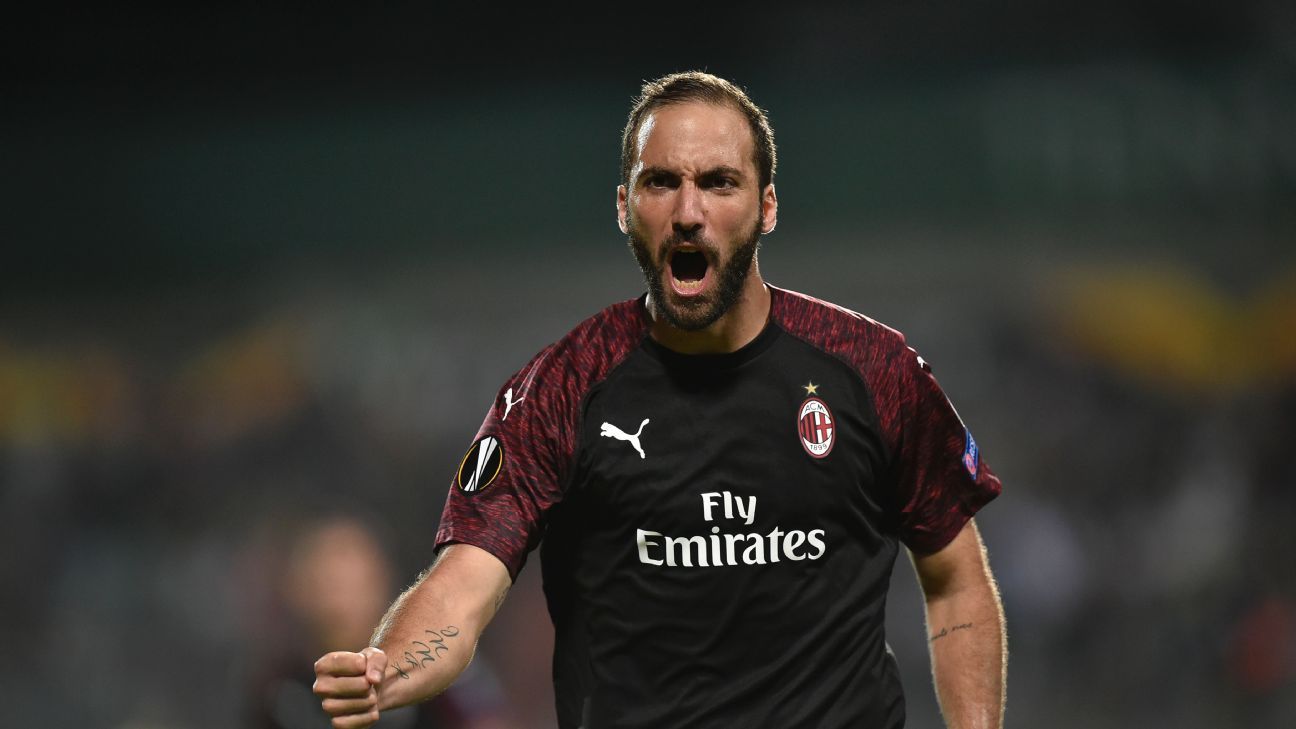 TOP STORY: Higuain back to Juventus?

AC Milan could send Gonzalo Higuain back to Juventus at season’s end, according to Corriere dello Sport.

The Argentina striker was loaned to the San Siro side for €18 million — with a €36m option to buy — at the start of the 2019-20 campaign. However, budget concerns at the San Siro could see the Rossoneri return him sooner than expected.

Given Higuain’s importance to manager Gennaro Gattuso, the outlet reports new Milan CEO Ivan Gazidis will try to negotiate a lower fee for the former Napoli and Real Madrid man, who has scored seven times in 13 matches thus far.

14.30 GMT: Tuttosport report that Juventus could be rivaled in their bid to bring Paul Pogba back to Italy by fierce rivals Inter Milan.

Inter are also believed to still have an interest in Real Madrid’s Luka Modric, but they are also thinking about an audacious attempt to bring Pogba to the San Siro instead of the Allianz Stadium.

14.10 GMT: AC Milan’s interest in Zlatan Ibrahimovic appears to be real, but any deal will likely be a six-month loan, according to Gazzetta dello Sport via Football Italia.

The LA Galaxy striker could head back to the San Siro during the MLS off-season until the end of the European season.

11.45 GMT: Is Arsenal’s head of recruitment Sven Mislintat ready to do more shopping at former club Borussia Dortmund? BILD seem to think so.

They report that the Gunners are interested in bringing Julian Weigl to the Emirates Stadium after losing his place in the starting XI.

10.25 GMT: Real Madrid’s search for a star centre-forward to replace Cristiano Ronaldo in the long-term is yielding little more than frsutration, according to Marca.

The Spanish daily reels off a lit of names that the European champions are considering — Eden Hazard, Mauro Icardi, Harry Kane, Neymar, Mohamed Salah, Timo Werner, Robert Lewandowski, Kylian Mbappe, Radamel Falcao, Paulo Dybala — but for various reasons either don’t quite fit the bill or are too difficult to sign.What must Karim Benzema, who has scored four goals in as many games since the team was revitalised under new boss Santiago Solari, make of it all?

09.20 GMT: The future of Paris Saint-Germain midfielder Adrien Rabiot has been a talking point for several months, as his contract expires next summer.

According to Spanish outlet Sport, the 23-year-old will have final talks with PSG next week, with the club bidding to tie him down to a new deal. Rabiot could otherwise sign a deal with a foreign club in January, with Barcelona long-time admirers of the former Manchester City player.

River Plate midfielder Juan Quintero — in Argentina on loan from Porto — has a big match coming up Saturday, as his team will play Boca Juniors in the second leg of the Copa Libertadores final.

The Argentine giants are deadlocked in a 2-2 draw after the first leg, but you’d forgive Quintero if he was a little distracted, with Don Balon reporting numerous rumours about his future with River following the January window.

The Spanish site suggests the Colombia international has already negotiated a move away from Argentina, with Premier League clubs Arsenal and Tottenham interested and a big-money offer on the table from an unnamed Chinese Super League club.

The 25-year-old was also linked with Real Madrid last summer, but wherever Quintero lands, it sounds as though his playing days in South America are numbered for now.

After failing to find regular minutes at Liverpool so far this season, Dominic Solanke looks set to go out on loan in the winter window. But where will he end up?

Jurgen Klopp has hinted more than once that the 21-year-old will leave Anfield in January, and Turkish outlet Fotospor says the likely destination is Galatasaray.

Not so fast, though, according to TalkSport, which has a conflicting report suggesting the Turkish giants will face competition for Solanke from none other than former Red Steven Gerrard at Rangers.

TalkSport says “Solanke is wanted to replace Umar Sadiq in Gerrard’s setup, with the Nigeria attacker expected to return to Roma in January.”

Could Gerrard’s Liverpool connection give Gers the upper hand? We’ll find out in January.

– The Mirror reports that former Man City defender Pablo Zabaleta is in line for a contract extension at West Ham. The 33-year-old has quickly become a crowd favourite at the London Stadium and can “get an extra year at the club if he makes a set number of appearances.”

– Barcelona are on the lookout for defensive reinforcements in January, and that search has led them to former Chelsea backline fixture Branislav Ivanovic. Goal reports that the Catalan club are unsure about when Samuel Umtiti will return from injury and see the Zenit St. Petersburg defender as a potential stopgap with the club unsure and unwilling to comment on how long the France international could be out.

– Jose Mourinho doesn’t believe Alexis Sanchez wants to leave Manchester United in January, but suggested he will not stand in the way if the Chilean decides to quit Old Trafford.

– Maurizio Sarri said that even January signings will not turn Chelsea into a genuine threat to Manchester City in this season’s Premier League title race.