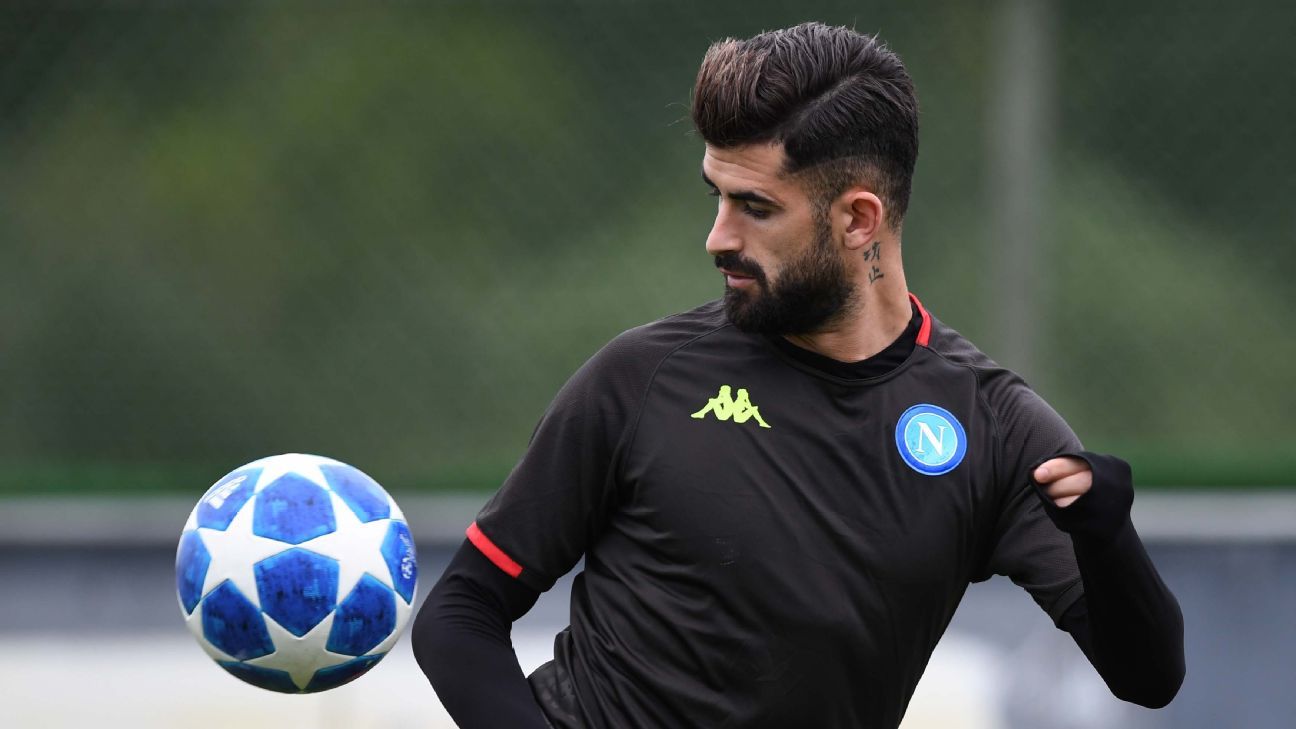 TOP STORY: Chelsea to return to Napoli for Hysaj

Chelsea have already raided Serie A side Napoli twice this season, hiring coach Maurizio Sarri before returning for midfield metronome Jorginho. They look set to return for a third time with an offer for right-back Elseid Hysaj – that’s according to Calciomercato.

The Albanian defender has a €50 million release clause in his contract in Naples and the Blues hope to negotiate a lower price than that for the defender.

However, there is a stumbling block for Chelsea in the form of a gentleman’s agreement struck between Sarri and Napoli when he left the club to succeed Antonio Conte at Stamford Bridge. It was agreed he would not return to raid his former employers after clinching a deal for Jorginho.

In spite of this, talks between the two clubs are believed to be underway with Hysaj, 24, keen to be reunited with Sarri at Stamford Bridge.

Several German outlets including kicker and Bild have reported that the Bavarians a the side of the 2018 World Cup struck an agreement with the France defender, who can reportedly activate a €35 million release clause next summer. But speaking to reporters on Wednesday, Pavard rejected those reports and said he has yet to decide where he will play in the 2019-20 season.

“I did not meet anyone from Bayern (at the World Cup),” Pavard said. “And I have also not signed anything.”

And when asked whether he has entered the final few months of his Stuttgart career, he said: “I don’t know. I feel well here. We’ll see what happens in the summer.”

Earlier this week, Bayern Munich president Uli Hoeness had said Pavard is “an interesting player for us,” and the defender replied: “It’s nice to hear stuff like that.”

14.00 GMT: Mario Balotelli has criticised AC Milan fans for turning their noses up at his rumoured return to the Serie A club and insisted he currently has no plans to leave Nice.

Balotelli, 28, spent the 2013-14 season with the Rossoneri and returned in 2015 for another spell before joining Nice from Liverpool in 2016.

He has recently been linked with another return this winter, but numerous fans of the Serie A club have showed their disapproval of that idea on social media, prompting Balotelli to take to Instagram to express his dismay at their reaction and also to set the record straight.

“It’s still nice to see so many Milan fans who would not welcome my eventual and quite IMPROBABLE return,” he wrote in a post on his Instagram story. “But that’s how it is: one day you’re wanted, the next you’re not — the important thing is that you don’t have any regrets.

“NO TRANSFER IS CURRENTLY PLANNED FOR ME and I’ve written this just to highlight the lack of recognition and lack of respect from a group of people who will always and anyway have a place in my heart.”

13.10 GMT: Paris Saint-Germain forward Neymar has promised David Beckham that he will one day play for his Inter Miami CF, while also adding that “all great players have to play in the Premier League.”

Speaking during a questions and answers session on his official YouTube account — in a video which has since been removed — the Brazil international’s first question was from former PSG midfield Beckham, who is now president of Major League Soccer franchise Inter Miami, ahead of their proposed 2020 debut.

“David, it is done!” Neymar said, while laughing. “I will come to Miami — your city and your club.”

“It is a big competition — one of the greatest in the world,” Neymar said. “We do not know how tomorrow will be, but I believe that every great player, at least one day, has to play in the Premier League. If you are playing there, then I hope that you can keep enjoying the Premier League because you only deserve the best.”

12.12 GMT: Barcelona’s desire to land Ajax duo Matthijs de Ligt and Frenkie de Jong remains big news in the Spanish press. Despite recent reports suggesting they would just move for defender De Ligt, Mundo Deportivo reports that they remain interested in the pair. However, they face competition from Europe’s biggest clubs for both players and to land the two could cost north of €150 million.

AS, meanwhile, add that Adrien Rabiot, out of contract at Paris Saint-Germain next summer, remains another, potentially much cheaper, midfield alternative to De Jong.

11.00 GMT: Lyon have asked Liverpool target Nabil Fekir for “a clear and precise” idea of whether he will sign a contract extension with the French club.

Fekir came close to joining Liverpool last summer only for the French World Cup winner’s move to Anfield to to fall through.

The 25-year-old has just 18 months left on his current deal with Lyon, and Chelsea and Bayern Munich have also been named among potential suitors for the midfielder, who has scored 47 top-flight goals in 126 Ligue 1 appearances for the seven-time French champions.

“For the moment, we haven’t really got into a real discussion, even though we met three weeks ago,” Lyon president Jean-Michel Aulas told his club’s AGM.

10.20: GMT: Bundesliga club Hertha Berlin hope to prolong Marko Grujic’s loan for another season. The Liverpool midfielder joined the German capital club on a one-year loan in late August. Despite an ankle injury, has shown he was the missing puzzle piece as Hertha push for an upper third finish in Bundesliga this term. Grujic has made six appearances for his new club so far.

With the Serb on the pitch, Hertha have recorded four of their five wins this season. They have also not lost a match in which Grujic featured. “We’ll discuss a scenario which will go beyond the summer with our Liverpool colleagues. But my fear is that the answer won’t come that quick,” Hertha sporting executive Michael Preetz told kicker and the Serb added: “If Liverpool want to send me on another loan, Berlin is the best place for me.”

09.43 GMT: If Napoli do lose Hysaj, they may just have lined up the perfect replacement, if reports in Corriere dello Sport are to be believed, as it is being reported the Azzurri are ready to make a €35 million bid for Stuttgart’s World Cup winner, Benjamin Pavard.

09.01 GMT: Atlanta United midfielder Miguel Almiron, who is a reported target for Newcastle, has told ESPN FC he prefers the Premier League over La Liga because of the English top flight’s “competitiveness.

“Yes, I really like the English style of football for the dynamic play and the competitiveness these is,” he said.

08.15 GMT: Roma winger Cengiz Under is being targeted by several Premier League sides and enquiries have been made about a January move, a source close to the player has told ESPN FC.

The Turkey international has built on his breakout 2017-18 season by impressing again this term with four goals and five assists in all competitions so far, including two goals and two assists in the Champions League.

That form has attracted widespread interest from across Europe with Arsenal, Chelsea, Tottenham Hotspur and Premier League champions Manchester City in particular scouting the 21-year-old. Enquiries have been made regarding a January transfer but a formal offer has yet to be made.

Arsenal coach Unai Emery has joined the race for highly-rated Club Brugge striker Wesley Moraes, according to the Sun.

The forward, who is valued at £15 million by the Belgian club, has scored seven times in 14 Jupiler League starts this season, adding to the 11 in 29 he bagged last season.

Emery is understood to want to bolster his striking options with Danny Welbeck’s ankle fracture meaning Pierre-Emerick Aubameyang and Alexandre Lacazette are Arsenal’s only senior strikers.

Wesley is contracted to Brugge until 2023 but Emery could test the Belgians’ resolve with an offer when the transfer window re-opens next month.

Newcastle United manager Rafael Benitez has played down reports linking Atlanta United playmaker Miguel Almiron with a move to the North East, according to the Chronicle.

The Paraguayan has been one of the stand-out players in Major League Soccer this season, scoring 14 goals and supplying 11 assists as the Five Stripes reached Sunday’s MLS Cup final against the Portland Timbers.

Newcastle are believed to be leading the chase for the 24-year-old, widely considered one of the best players in MLS, with a January move anticipated.

However, Benitez was reluctant to discuss the possibility of a move for Almiron next month.

Speaking after his side’s 1-1 draw at Everton on Wednesday, the Spaniard said: “If I don’t know means I don’t think so. We don’t talk about players. Now is the time to enjoy the performance of this group.”

The Uruguayan forward has been linked with a return to former club Napoli amid reports he does not get on well with Neymar or Kylian Mbappe at PSG.

However, veteran goalkeeper Buffon insists Cavani will remain in the French capital.

“I often talk about Italy with him,” Buffon said on Italia 1’s Tiki Taka show.

“He is very close to Napoli for the love of the Neapolitan people. He is not immune [to the interest Napoli president Aurelio De Laurentiis], but I think that, at the moment, PSG gives him more of a chance to go to the end in the Champions League.

“Not that Napoli doesn’t have a chance, but I think Cavani will prefer to try it with us until June.”

Football Whispers’ transfer algorithm gives the likelihood of rumours happening a score out of 5.

According to Gazzetta dello Sport, Inter are considering a move for out-of-favour Manchester United defender Matteo Darmian to provide cover for Sime Vrsaljko who has struggled with fitness this season.

Lille winger Nicholas Pepe is a one of Arsenal’s “priorities” as they seek to bolster their attack next season, according to Mercato365. The French outfit will demand at least €50m for the Ivorian.

Real Madrid had scouts at Sunday’s 2-2 draw between Roma and Inter with Greek defender Kostas Manolas one of the players they were watching. According to Tuttomercato, he has a €36m release clause which Real could be tempted to meet.

Diego Costa’s return to Atletico Madrid has not gone to plan and the Spanish side could cut their losses by selling the former Chelsea striker to Chinese side Tianjin Quanjian, according to Spanish radio station RMC, reported by AS.

Currently on loan at London rivals Chelsea from Real Madrid, Mateo Kovacic will be on Tottenham’s radar next summer when his loan comes to an end as, according to AS, he has no future at the Santiago Bernabeu.