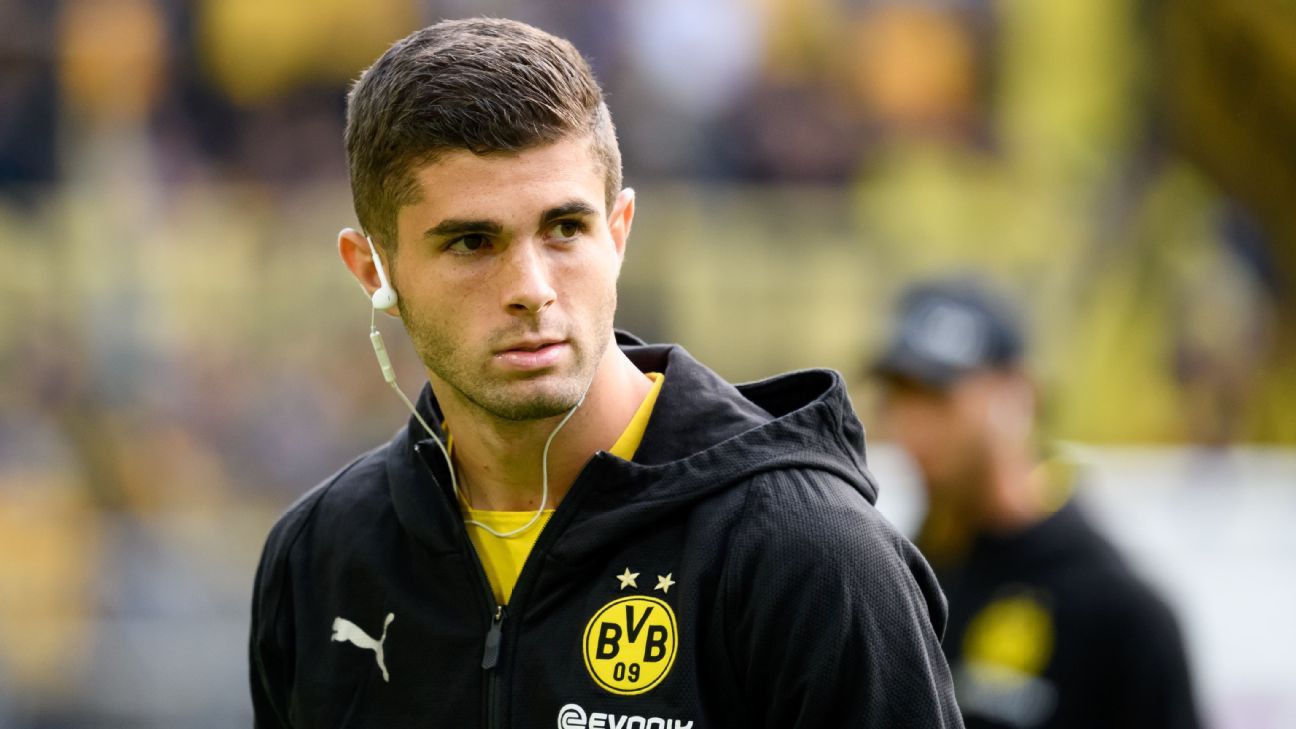 TOP STORY: Chelsea ready to sign Pulisic but will wait for him

United States star Christian Pulisic could sign for Chelsea in January — but he wouldn’t arrive in London until the summer, according to the Mirror. The Blues “are ready to do a £70 million deal” for the Borussia Dortmund midfielder and prepared to wait for him to join if it means they can wrap up the signing quickly.

Earlier this month, reports said Pulisic — also linked with Liverpool and Tottenham — had told Dortmund teammates his future was in England, but BVB have said the 20-year-old will not leave before the end of the season.

Pulisic is under contract until 2020, but the Mirror says the Bundesliga leaders “have held talks with Chelsea, who are leading the chase.” The Londoners see him as a potential replacement for Eden Hazard, who continues to be linked with Real Madrid, and there is “growing confidence” that he will be on his way to Stamford Bridge.

TeamTalk claims the Leyton Orient man’s 15 goals this season has sparked interest from several second-tier sides, with Norwich and Leeds at the top of the list. The 23-year-old Zimbabwe international is no one-hit wonder either, as Bonne bagged 22 last season for the O’s.

Whichever side lands the striker could prove decisive in the push for promotion as Norwich (first) and Leeds (third) are separated by just three points in the table.

Wonder what Real Madrid are like when it comes to transfers…

15.13 GMT: Calciomercato report that Chelsea and Manchester City scouts watched Brescia midfielder Sandro Tonali during a 2-1 defeat to Venezia in Serie B this weekend. The fee for the 18-year-old is around €40m with Inter Milan and Juventus also keen on a player labelled “the next Andrea Pirlo.”

14.36 GMT: Liverpool fans rejoice… you may not be getting Christian Pulisic but how about Real Madrid’s Marco Asensio?

Spanish journalist Eduardo Inda told Spanish publication OK Diario: “This year, an offer of €180m came to Real Madrid from Liverpool for Asensio. The club said no because Cristiano [Ronaldo] left, but [Jurgen] Klopp is in love with the player and will go for him next summer.”

13.49 GMT: Manchester United midfielder Andreas Pereira impressed for a bit earlier this season but now seems to be back fighting for his place. Well, he might choose to do that at another club as Arsenal, Chelsea and Paris Saint-Germain are all reportedly keen. UOL say that the Gunners are in pole position.

13.04 GMT: Former Manchester United defender Rafael has told ESPN Brasil why he left the club for Lyon in 2015. “I think the thing that really made me leave there was that I was playing little with [Louis] Van Gaal. I didn’t play for a certain time. It was clear he was not going to use me. Sometimes I trained well and I did everything well but I still didn’t play. He made it clear that he wanted me to leave. That weighed heavily. Then Lyon are a great club, one of the biggest in France, and have a history with the Brazilians.”

12.31 GMT: Yup, it’s that time of year again when being left out of your club’s 2019 calendar means you’re being sold. Step forward, Anthony Martial.

10.48 GMT: CalcioNapoli24 are reporting that Tottenham are keen to sign Napoli midfielder Allan. The 27-year-old is more of a finished product than Amadou Diawara, who Spurs were also trying to snap up, but would cost around €40m.

Anything that brings more brilliantly single-named Brazilians to the Premier League is fine by us.

10.03 GMT: Former Arsenal boss Arsene Wenger didn’t want to return to club football with Fulham (just imagine him playing against his old club of 22 years!) but he might be willing to go to Bayern Munich, say the Daily Telegraph. Until he realises they could easily meet in the Champions League again soon of course…

09.27 GMT: Ousmane Dembele has not told Barcelona he wants to leave in January and the club have no plans to sell him when the transfer window opens, sources have told ESPN FC.

09.21 GMT: Claudio Ranieri is the new boss at Fulham and he seems to have an idea about how to save them from relegation: turn them into his old Premier League title-winning team Leicester.

TEAMtalk says that Fulham are keen to sign Danny Drinkwater on loan from Chelsea, then splash out on FOUR others. Namely, Danny Simpson, Christian Fuchs, Shinji Okazaki and free agent Robert Huth.

08.42 GMT: Ashley Cole is one of eight players released by the LA Galaxy. Anyone want a 37-year-old defender with plenty of Premier League experience?

08.30 GMT: Galatasaray could be set to add not one but two Liverpool strikers, with loan moves for Dominic Solanke and Divock Origi in the offing, according to the Mirror. Citing reports in Turkey, it says talks have begun over a temporary switch for Solanke — also wanted by Liverpool legend Steven Gerrard at Rangers — with Belgium international Origi also targeted.

More on Manchester United’s links with West Ham United forward Marko Arnautovic, with the Telegraph saying that, although interest has been expressed, nothing will happen in January.

United will “continue to monitor Arnautovic for the rest of this season,” but whether they opt to make a move looks likely to depend on whether manager Jose Mourinho stays.

The Telegraph adds that United would be reluctant to pay a significant fee for the 29-year-old Austria international, who has more than three years left on his contract. West Ham “are aware of the interest in Arnautovic and that intermediaries are sounding out clubs.”

West Ham are happy to leave it until the end of the season before re-starting contract talks with Declan Rice, according to the Guardian.

Rice has yet to agree a new deal and is reportedly interesting both Tottenham and Chelsea, with his existing terms into their final 12 months. But the Guardian says the Hammers are relaxed over the future of the 19-year-old, who can play in midfield or defence, and “do not anticipate losing him for nothing next summer.” They have an option to extend Rice’s contract until 2021 and feel they “are in a position of strength.”

Goalkeeper Zack Steffen is in negotiations about a move to Manchester City, multiple sources have told ESPN FC, with the fee expected to be between $7 million and $10m.

The 23-year-old, who plays for Columbus Crew and won the 2018 MLS Goalkeeper of the Year award, has made six appearances for the U.S. and seen his stock grow over the past two seasons. He would need to acquire a work permit and would be likely to require a special exemption because he has not played enough competitive international fixtures.

The Athletic first reported news of the talks after the Sun had revealed City’s interest in the keeper, who began his professional career with Freiberg in 2015, over the weekend.

Everton in for Ndombele?

Everton are interested in £40m-rated Lyon midfielder Tanguy Ndombele as they look to bolster their squad for the second half of the season, the Liverpool Echo reports.

Scouts have watched Ndombele in recent weeks, but the Echo warns that Everton “would face competition from a host of top European clubs should they make a move,” with Manchester City among those keen.

Having scored as many league goals this season as PSG star Kylian Mbappe (12), Nantes striker Sala is a reported target for Leicester City and West Ham United and the 28-year-old would cost around £25m, according to the Daily Mail.

Mangala is still a Manchester City player, but maybe not for much longer as reports in Italy state Inter are interested in the France centre-back ,who has spent much of the season injured.

This one has been gathering pace since the Daily Mail reported the story days ago. Can Manchester United make a last ditch save to secure their keeper’s future with his contract due to expire in the summer? The club have the option to trigger an additional year but beyond that, he would be a free man.

There are a couple of rumoured incomings for Man United, though, with the Metro spotting the club’s scouts at West Ham watching Declan Rice, who could provide them with a long-term solution in defence or midfield.

Cengiz Under to Manchester United – 2.6

“We haven’t decided anything for Cengiz Under yet,” Roma sporting director Monchi told Sky Italia. Which has been translated as “he’s going to Man United (or Arsenal),” and the rumour seems to have legs, according to media outlet Turkish Football.