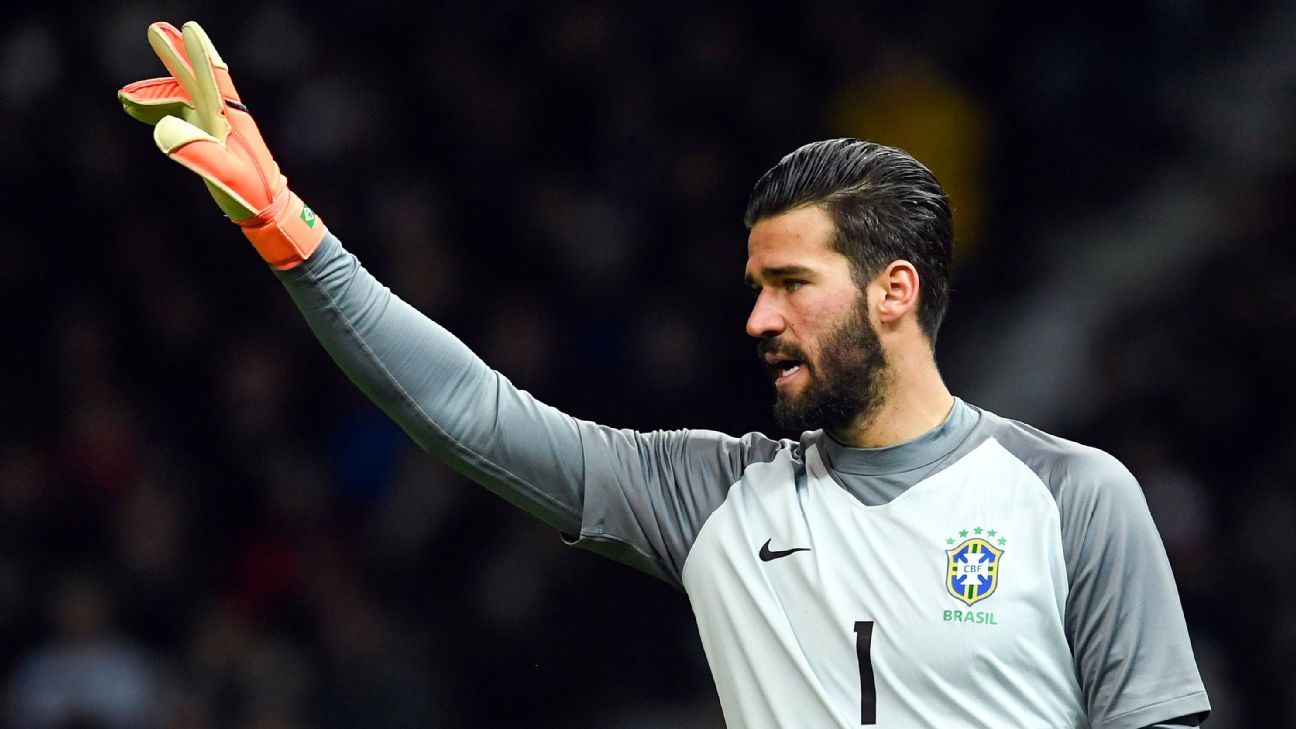 Chelsea look set to spark a goalkeeper merry-go-round after registering their interest in Roma star Alisson, the Mirror claims.

The Blues will rival Liverpool and Real Madrid for the Brazil No. 1, as Thibaut Courtois edges toward the exit with one year remaining on his contract.

Courtois would likely return to Madrid, but to which club? He featured for Atletico for three seasons on loan, but Real might be eager to upgrade. And depending where Courtois lands, it could mean that goalkeepers on the order of Atletico’s Jan Oblak and Real’s Keylor Navas suddenly become highly prized (and available) targets.

08.23 BST: Juventus defender Medhi Benatia has been linked with a move to Arsenal and, according to reports in the Daily Express, he’s tempted.

Following Zinedine Zidane’s resignation as Real Madrid manager, Tottenham boss Mauricio Pochettino is the No. 1 choice as replacement say both the Mirror and the Daily Mail.

Meanwhile, Chelsea have been linked with a move for Zidane.

Sorry, Arsene, no links for you today.

Juventus will try to tempt Chelsea into selling Alvaro Morata by offering Gonzalo Higuain in a swap deal, says the London Evening Standard.

Juve see this summer as the perfect opportunity to recoup some of the £78 million they paid Napoli for the Argentinian two years ago and offload Higuain’s £125,000-per-week wages to make room for the Spaniard.

Morata enjoyed two successful seasons in Turin, scoring 27 goals from 2014-2016. Chelsea dismissed an approach to take Morata on a two-year loan, but would be willing to listen to permanent offers, though it remains unclear whether a 30-year-old Higuain, with little resale value, would appeal to the Blues.

… or is it for Inter’s Icardi?

Meanwhile, Tuttosport believes Juve are pursuing the “swap of the century,” with Inter Milan receiving Higuain and Mauro Icardi heading to Turin.

Icardi, 25, inspired the Nerazzurri to Champions League football and scored 29 goals to capture the title as Serie A’s top scorer.

But a €110m release clause could push Inter into considering the swap in order to guarantee a top-class replacement for their captain.

— Frank Lampard was named the new manager at Derby County on Thursday, and the Daily Star reports he’ll be reunited with his former Chelsea captain John Terry, who will leave Aston Villa to play another season in the Championship.

Lampard is quoted in the Express as saying, “I haven’t even had a conversation with John. That’s the truth — I got a text message off him but he’s on holiday. I’ll look at it as a big picture.” Meantime, Harry Redknapp believes his nephew should make a deal for Terry: “What a signing he’d be!” he said, according to Talksport.

— Newcastle are targeting Gian Marco Ferrari to strengthen their defence under Rafa Benitez, according to Chronicle Live. The Magpies will compete with Fulham and Sampdoria, where the 26-year-old spent last season on loan. Sampdoria have an £11.2m option to turn that loan into a permanent deal, but are currently negotiating to lower that figure.

— Chelsea defender Kurt Zouma could join Turkish side Bursaspor on loan next season to continue his development after a season with relegated Stoke, says the Mirror. Fiorentina are also keen, but the French defender likely will return for Blues’ preseason training.

— Napoli have met with Sampdoria over a proposed move for Uruguayan midfielder Lucas Torreira, according to Tuttosport. The Italian daily also claims Torino and Marseille are in talks concerning a deal that would bring Bouna Sarr to Turin, with M’Baye Niang heading in the opposite direction.